Rob was just 24 when he was diagnosed with an inoperable astrocytoma glioma brain tumour. Faced with a bleak prognosis of just 18 months he underwent treatment, including radiotherapy, knowing it was likely to destroy his hopes of ever having children. Dubbed the “miracle man” for outliving expectations, he went on to father a “miracle baby.” As Rob’s condition deteriorated and treatment options ran out, his wife Teresa and their daughter Lily-May, aged two-and-a-half, prayed for a miracle of a different kind. Sadly, Rob passed away on 11th August 2016.

“As Rob finished his radiotherapy, I was working on a maternity ward in the same hospital. On the one hand I was celebrating new life and dreaming of the babies we longed for, while on the other I was facing the very real possibility of losing the man I loved and, with his death, the future we had planned.”

Rob learned he had a brain tumour after he was referred for a scan because he had become increasingly clumsy. We thought it was just a precaution and had no idea his deteriorating co-ordination was being caused by an inoperable growth which would slowly take his personality and his life.

At first we were urged not to worry too much as Rob was young, just 24 when he was diagnosed, and in good health. We were even told it was “almost certainly” not cancer and that in six months’ time the shock of what we had just been told would be a distant memory and Rob would be back at work as a self-employed plumber. We had two options; wait and see what, if anything, happened or have a biopsy so we would know what lay ahead. We chose the latter which revealed an inoperable astrocytoma glioma brain tumour on the left side of his front temporal lobe. It had grown to the size of an orange and was in two parts of his brain with a blood vessel running through it which meant surgery would paralyse or kill him.

I felt as if my whole world had collapsed. It was early 2009, Rob and I were young and in love. We were living with our parents as we saved up for our first home together and made plans for the future. Babies were definitely on the agenda. I have always loved children and was studying childcare at college when we met. I was 17 and he was my first proper boyfriend. After that I worked as a nursery nurse before starting at Queen’s as a maternity care assistant where I would be in the operating theatre as babies were born by caesarean section.

Reeling from the shock of Rob’s diagnosis, we were told that he would begin a six week course of radiotherapy which could make him infertile. He chose not to freeze his sperm as I couldn’t bear the thought of having his baby if he wasn’t going to be at my side. We put thoughts of having a family out of our minds and set about fighting with all our strength.

Things were very fraught. Rob told me to go off and find somebody else who could give me the things I wanted, marriage, a child, a house, a future. He loved me and didn’t want me to have to go through this but there was no way I was going to leave him, he is the love of my life.

As Rob finished his radiotherapy, I was working on a maternity ward in the same hospital. On the one hand I was celebrating new life and dreaming of holding our own baby, while on the other I was facing the very real possibility of losing the man I loved and, with his death, the future we had planned.

The treatment made Rob unbearably tired, he lost his hair and also struggled with anti-seizure medication. At first we were overjoyed to discover the tumour had shrunk from the size of an orange to that of a £2 coin. Within weeks though, the seizures were back. There was concern that the tumour had grown and he was put on the chemotherapy drug Temozolomide. He responded well and was dubbed “miracle man” by his consultant as he had outlived everyone’s expectations.

Rob was accepted for a clinical trial at St Bart’s and a metal cage was screwed to his head so he could have intense radiotherapy delivered with pinpoint accuracy by a gamma knife. It was a grotesque procedure. Although there was no vast improvement, it slowed the tumour a little.

We had a breathing space and dared to look towards the future again. Rob proposed to me on my 24th birthday in September 2010. It was a big milestone for us and one which I hadn’t dared to hope we might reach.

Later scans showed the tumour was back and, this time, it was more aggressive than ever. We needed to get married before it was too late. We had a big church wedding in September 2011. It was a wonderful day. Rob couldn’t decide who to have as his best man so he ended up with five and I had five bridesmaids too.

When I was five, my mum had been diagnosed with breast cancer which came back ten years later. Soon after our wedding the cancer spread to her brain and she started to deteriorate rapidly. She died the following April. I had lost my mum to cancer and my husband was fighting for his life.

Two months later we discovered I was pregnant. We were extremely surprised but overjoyed. I suffered from extreme morning sickness throughout, losing five stones in weight, but Rob was there for me all the way. I will never forget the sheer pride in his face the moment Lily-May was born in February 2013. We had a place of our own, we were a mum and dad and, although the tumour was always in the background of things, life was good.

Rob was never allowed to be on his own with the baby and he found that hard, feeling as if he was being babysat in case he had a seizure and caused harm to himself or our child. The day came that Rob suffered a severe fit and he was put on PCV, the extremely toxic combination of chemotherapy drugs Procarbazine, Lomustine and Vincristine. The treatment makes you very ill but if you don’t have it the outcome is far worse. Rob had a number of complications including shingles but the PCV worked, keeping the tumour at bay and giving us some stability at least for a while.

By April 2015 the seizures were back as the tumour began growing once more. Rob had more Temozolomide but there was no improvement and he was admitted to hospital with neutropenic septic shock. I was told that I should bring him home and that we should concentrate on making memories together as a family. There was little more to be done. Since then he has had another chemotherapy drug but we are running out of time and treatment options.

We believe our only hope is the drug Avastin which would cost up to £11,000 every fortnight. The treatment is not available on the NHS as it is not licensed here for use on brain tumours.

We know we are going to lose Rob but I am determined to do all I can to prolong his life. I want more time for Lily-May to get to know her dad. I am not ready to lose him and will fight for as long as I can. Rob hasn’t been able to work since his diagnosis and I gave up my job to be his full-time carer. How can we afford to fund the treatment he so desperately needs? Somehow, we must.

When the day comes that Rob closes his eyes for the final time, I need to know that I have done everything in my power possible to get help for him.

Rob is awaiting the results of his latest scan. Thanks to the generosity of friends and neighbours, later this month we will have our first foreign holiday together. I hope and pray that it won’t be our last. 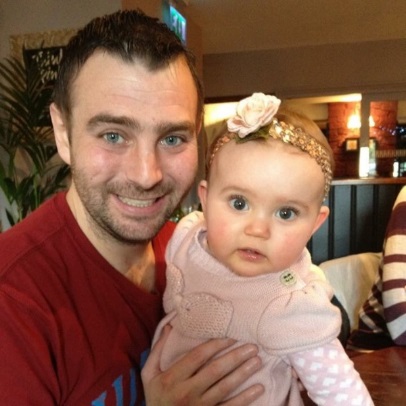