Newspaper printer Ralph Baker suffered excruciating headaches and swelling to his head before his brain tumour was diagnosed in 1954. Surgery was deemed impossible and the prognosis with radiotherapy was very poor so he received no treatment. Within three months of his diagnosis, Ralph lost his life. He was 43.

In the summer of 1953 my father Ralph who was then 42 complained of excruciating headaches and whilst we were on holiday his head and forehead became swollen. At the time, this was put down to a reaction to the heat and sun. I also remember how bad tempered he became during that year. Little did we realise why.

Dad worked as a printer on the Daily Sketch (now the Daily Mail) in London and, on Easter Monday 1954, he was sent home as he felt ill and had nearly passed out in front of an open window. His headache became very severe and he took to his bed. He was in such pain that I would come home from the commercial college I was attending, aged 15, to sit on his bed, stroking his forehead and hoping this would soothe him.

Two weeks later he was admitted to the West Middlesex Hospital in Isleworth (then Middlesex, now West London) and, after tests, sent to the Central Middlesex Hospital, where he was diagnosed with an inoperable brain tumour behind the eyes. My mother was told that if radio therapy treatment was given he would “finish up as a vegetable” but whether they were the doctor’s words or my mother’s own, I do not know. It was decided no treatment be given.

During the three months from Easter to 21st July 1954 when Dad died, I saw him only once. Mum was advised to keep me away as dad’s condition had deteriorated so much and it was thought this would be best for me. The one time I did visit, as we walked into the ward, mum veered off to the left and I thought she was going to talk to another patient. I was shocked when I realised it was my dad. I knew him as a man of 6ft, athletic build and good looking; he had been a PE instructor with the RAF during WWII. But now I found myself looking at this “old man”, no teeth, very thin and with part of his head shaved where an exploratory operation had been carried out.

Mum told me later that on one visit another patient had told her dad had picked up a boiled egg and tried to eat it with the shell on. He was in such pain he did not realise what he was doing. Mum and I sobbed our hearts out.

For his final days, dad came back to our local hospital. Mum must have been so strong with him but, when she came home, I would crawl into her bed at night and we cried in each other’s arms.

My sister had only turned three a couple of months before he went and remembers nothing of him. I regret not having asked him how he gained an Oak Leaf medal and more about his “mention in despatches.” Sadly, I have tried to find out more in recent years but with no success.

When dad passed away mum agreed that a post-mortem examination be carried out as it might help future research.

With dad’s death came financial upheaval as there was no longer money to pay for my college course in secretarial skills. The principal helped by arranging an interview for me and, less than a month after losing dad, I started work as a clerk typist. It was a bewildering and scary time.

I worked hard and climbed the career ladder and I think dad would have been proud. I gave mum half my wages each week and we took in lodgers. Mum was unable to work as there was no-one else to look after my little sister.

Back in the 1950’s there was no bereavement counselling, you just ‘got on with life’. Mum re-married five years later. We had drifted apart after dad died and did not become closer until my first child was born, some eight years later.

I married a local lad and we moved to Dorset to raise our children. My husband died in 1982 and I remarried and worked abroad before divorcing and returning to Dorset. In later years I met and married my present husband – we were 72 and 74 – and settled in the Wirral.

How shocked I was to read recently in a magazine that Brain Tumour Research still has far to go.   My thoughts are with those with the dreadful disease and their family and friends. 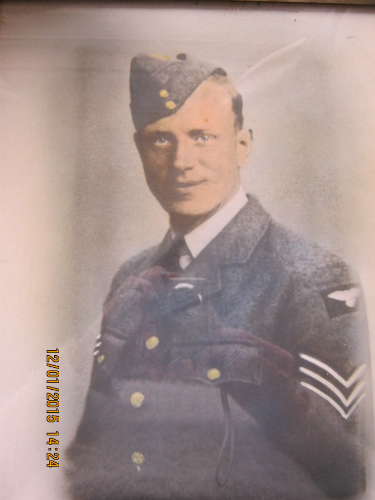