Rachael Corbishley was diagnosed with a brain tumour in May 2021 after having a seizure at her home in Finsbury Park, North London. She had been suffering with an earache for about two weeks. The 29-year-old underwent a cranial biopsy, which confirmed she had brain cancer, and one radiotherapy session before becoming too ill to continue the treatment. Her tumour is documented as a grade 3 anaplastic astrocytoma but it is now thought she could have had a grade 4 glioblastoma (GBM). She died in the October, five months after receiving her initial diagnosis.

Here is Rachael’s story, as told by her husband Alun …

We both worked in international development and were living in the Middle East when we first met and fell in love, in Jordan. Rachael was doing project development for Save the Children at the time, managing some of the grants received as part of the emergency response to the conflict in Yemen. We then moved to Uganda together. There Rachael managed a lot of the charity’s education programmes and helped set up and expand a consortium of more than 18 charities, coordinating their education projects too. 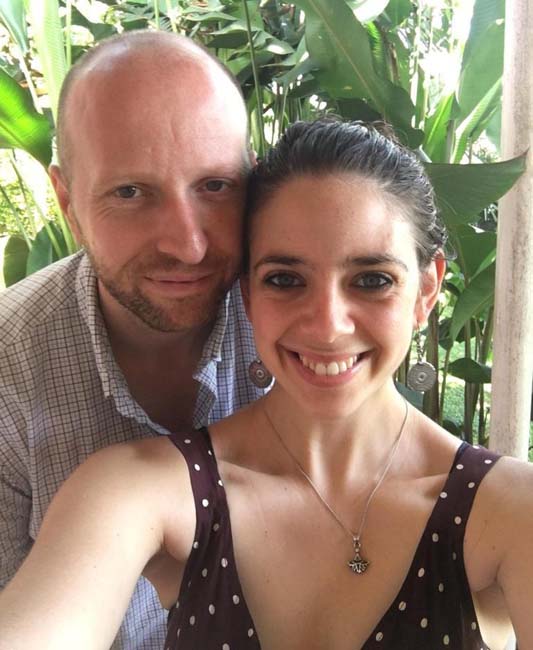 “She was very passionate about life and found everything about the world interesting.”

She had such a big personality – she was loud and lots of fun and loved chatting with anyone. She also loved dancing and reading. She was always very inquisitive and fascinated by how people learned and how access to education differed across the world. She went to Cambridge University and was aware she’d had a privileged education, while many young women in Uganda didn’t have the same opportunities, facilities or resources. When we moved back to London a couple of years later, she enrolled in a Master’s degree in education and development. She was still studying at University College London when she fell ill and was awarded it posthumously earlier this year, based on the quality of work she’d done before getting sick. 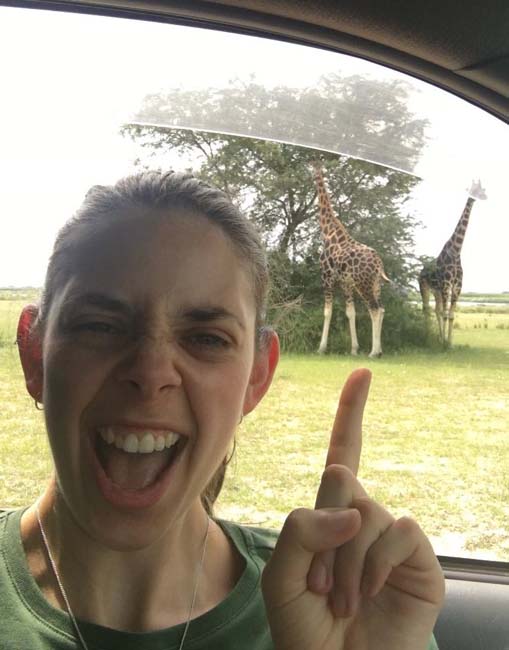 The moment that changed our lives came completely out of the blue one day towards the end of April 2021 when we were both working from home. I was in a separate room to Rachael, who was doing some consultancy work alongside her Master’s, and she came in saying that she felt “really weird”. The left side of her face had drooped and her left arm was doing weird things, almost as if she was having a stroke. It stopped and we called for medical advice, but then it started again and she had her first seizure right in front of me.

“I didn’t know what was happening, so it was really terrifying.”

Just a couple of days before, we’d been out for dinner at Rachael’s favourite restaurant and gone for a run around the Arsenal stadium. She was fit and healthy, except for a mild earache she’d had which wasn’t painful enough to cause alarm.

“We didn’t take it seriously at the time but now know that was the first symptom of her brain tumour.”

An ambulance took Rachael to A&E at the Whittington Hospital, in North London, where she was admitted for several days. She had a CT scan but that didn’t appear to show anything and, when the doctors found out we’d lived abroad, they became concerned about tropical diseases and began testing for those. No one seemed to know what was wrong with her, but they were in touch with the National Hospital for Neurology and Neurosurgery (NHNN), in Queen Square. After a few days, a doctor at the Whittington said a team at the NHNN had reviewed Rachael’s scans and concluded she had some form of glioma brain tumour. At that point I was still hopeful, allowing myself to think years into the future.

“It didn’t seem like the tumour had been very obvious or visible on her scans and I thought that meant it was small and would be treatable.” 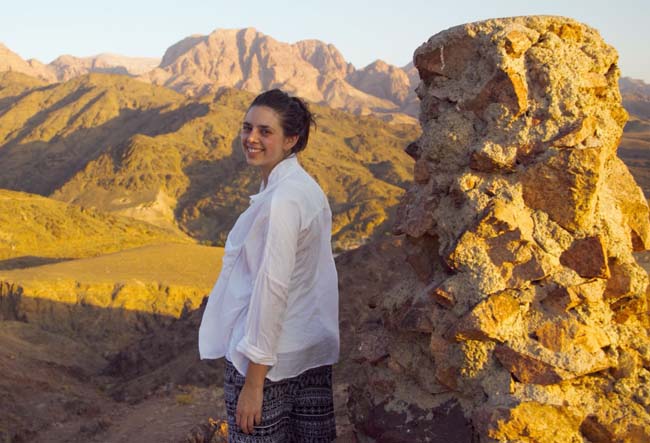 We had a phone consultation with one of the NHNN surgeons after returning home. She said Rachael’s tumour couldn’t be surgically removed because of its location. She booked her in for a biopsy so its grade and size could be assessed, and a plan made regarding other treatment options like radiotherapy and chemotherapy. This was brought forward to the start of June after Rachael suffered another seizure.

“From then on it felt like whatever the doctors were doing or saying, they were always one step behind what was happening with the tumour.”

The day after being discharged, Rachael had another seizure and from then she got worse quickly. We got her biopsy results a week later and were told her tumour was cancerous, probably grade 3 but possibly grade 4, so they wanted to do more genetic testing to be sure. They didn’t talk about her only having weeks to live, but rather about the possibility of her getting back to work.

“This made it all the more shocking to see her deteriorate so much over the next couple of weeks, resulting in her being readmitted to hospital.”

We had an appointment with an oncologist to discuss a radiotherapy plan and Rachael was booked in for a session at NHNN. He reviewed her latest MRI and that was the first time I saw a scan of her brain. I remember thinking how big her tumour looked. Her first session was brought forward and it was clear her treatment plan was becoming more urgent, but then she deteriorated further. They had her on high-dose steroids to reduce the swelling on her brain but she wasn’t sleeping at all and was generally going downhill. She ended up back in hospital and they weren’t sure she’d be well enough to start the radiotherapy, but she did it as an inpatient.

“Her tumour had a negative reaction to the first blast of radiation, and she was left unconscious as a result.”

As it happened during COVID, there were limits on how often we could go to the hospital, so her mum and I only found out what had happened after getting a call the morning after. We were told Rachael had been rushed to intensive care and they weren’t sure she was going to wake up. To our surprise, about an hour later both of our phones started buzzing with messages from her asking where we were and telling us to come see her. 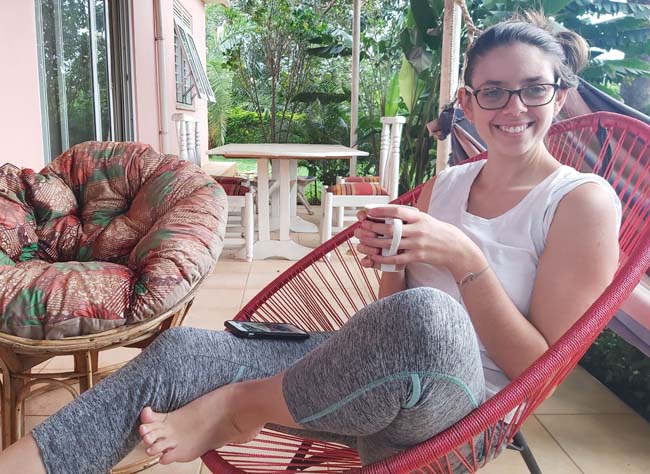 “The hospital discharged Rachael into palliative care at the end of June after the oncologist said they couldn’t offer any further treatment.”

By then she’d completely lost the use of the left side of her body. Within three weeks the doctors had gone from talking about getting Rachael back to work to talking about end-of-life care – everything happened so quickly. They thought she only had a few days to live but Rachael was convinced she’d feel much better, and stronger, once she returned home and was around family and friends. The hospital arranged for us to have a civil partnership ceremony at home, where Rachael was confined to a hospital bed in our room. She wore a dress she’d ordered online and our families were there.  It was something we’d both planned to do in the future but had never thought of as urgent until then. 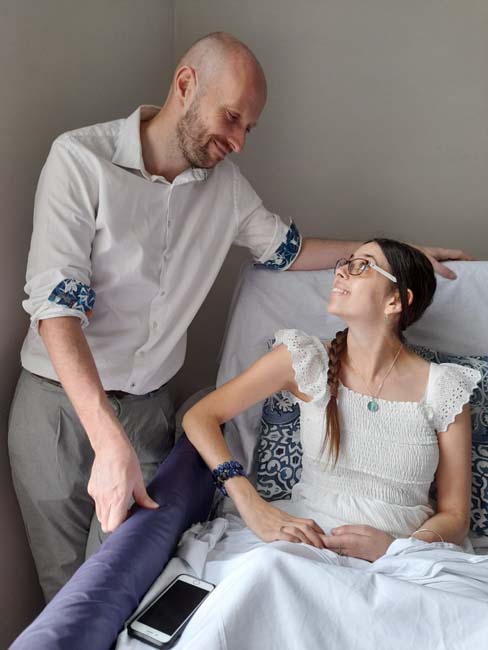 “I’ve never seen anyone more determined than Rachael and, over the next few weeks, she defied the doctors by getting stronger.”

They didn’t think she’d be able to regain any use of her left side, but gradually she did. At first she just moved her little finger, then she wiggled her toes and finally she moved her arm. We had a therapist come round and with a little help, Rachael managed to stand up. Eventually, she was even able to walk around the flat. It’s on the first floor, so making it downstairs was difficult, but with help she managed it. We got her a wheelchair and were able to enjoy time out at our local park, at the pub where we had Sunday lunch and we also went shopping.

Everyone was amazed by her improved strength, and her doctors agreed to do another MRI. We all wanted to know what was happening with her tumour and whether it was possible for her to start radiotherapy again, but the scan showed it was still growing. They had no idea how she’d started walking again but said it was possible she’d managed to find another pathway from her brain. I quite liked that idea. Sadly, as a testament to what a cruel illness this is, Rachael soon began to deteriorate. All the progress she’d made was reversed and within a couple of days she was back in bed, where her health continued to decline. She lost her movement again and then became unable to speak, which was really tough for someone so communicative. She found other ways though, like raising her eyebrows.

“Rachael died at home in October last year, just five months after we were told she had a brain tumour and a little more than three months after she was discharged from hospital.”

She hadn’t wanted to go back into hospital, so her mum, Heather, moved in with us to help look after her. We agreed to keep her at home where she was most comfortable and where the palliative care team and district nurses could visit regularly.

“Although those last few months were miserable and not what either of us would have expected or chosen, we did laugh a lot.”

Rachael really cared about her friends and family and we kept a steady rota so they could book appointments to see her. She really appreciated their support and they were really helpful to me and her mum. She had a great time hanging out with them in our room, ordering takeaways and gossiping. She loved the regular visits from her brother, Thom, and dad, John. Despite the miserable circumstances, she was happy and I’m glad we had that time. 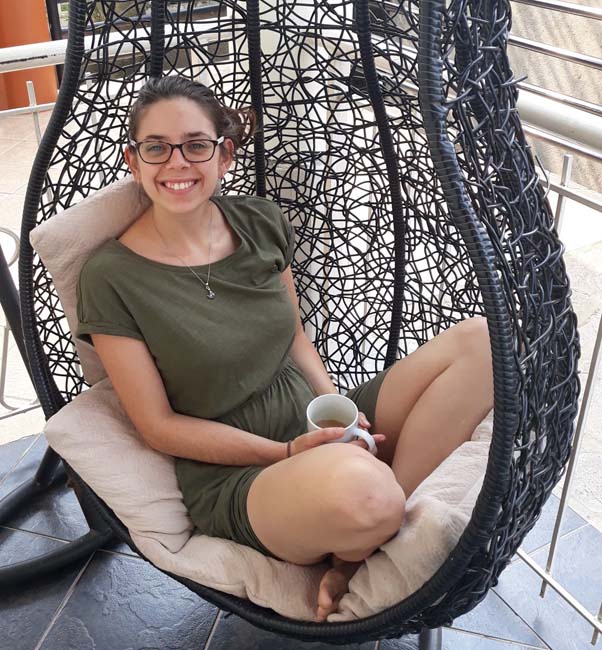 She continued to impress and amaze me throughout her illness. I’ve never seen anyone as determined and strong as she was in those last few months, and I was more in love with her than ever. She was incredible. She did start having short-term memory problems, but she compensated by taking lots of notes, and kept most of her personality traits.

As soon as Rachael found out she had a brain tumour, she wanted to know everything about it. She found it incredibly frustrating that nobody could tell her exactly what was going on or how and why it had developed, which is why we chose for her funeral donations to go to Brain Tumour Research. I know that if she’d lived longer, she’d have wanted to campaign for the charity.

“She was outraged by the lack of investment in research into brain tumours and the lack of mental health support for patients coming to terms with a brain tumour diagnosis.”

We never did get the results of Rachael’s genetic testing. It’s officially documented that she had a grade 3 anaplastic astrocytoma, but her tumour was so aggressive that it seems likely it was a grade 4 glioblastoma (GBM). Now she’s no longer here, it doesn’t seem all that relevant. Rachael was 29 when she died. There’s a bit of an age gap between us as I’m more than 10 years older. We’d often joked about her having to look after me as we got older and both assumed that I’d be the first to go. Neither of us imagined it would happen this way around.

“I want to do what I can now to prevent others from having to experience the same pain I have from losing a loved one.” 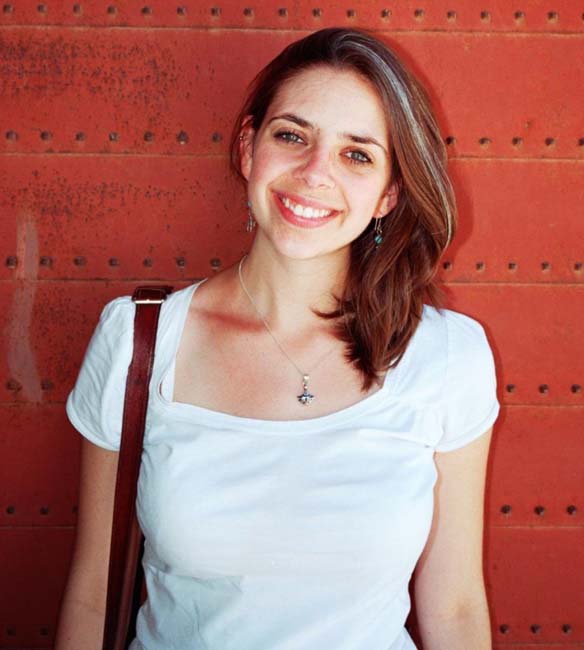