Husband, father, and grandfather, Prem Bedi was diagnosed with an aggressive glioblastoma multiforme (GBM) brain tumour after his family noticed personality changes. The usually quiet man who loved Bollywood music and was a talented singer, became forgetful which made him frustrated. He passed away just a few months later.

“Prem’s first love was music and I believe we were the first couple to have a live Asian band to play at our wedding. Music was Prem’s life and his passion. He would beat out rhythms on the kitchen table as we sang the old numbers together. I miss him so very much and am so, so lost without him.”

Prem and I had an arranged marriage. Our families had chosen on our behalf and although it wasn’t love at first sight we were together for nearly 41 years and over that time our affection and understanding of one another grew.

A mild-mannered man, Prem had trained as an engineering tool maker and entered the family garage business. We had two sons, Rajesh and Vishal, who now have families of their own and Prem, who was selfless and would rarely buy anything for himself, worked hard to look after us.

We celebrated Prem’s 65th birthday in January 2015 with a small party but he seemed distant and wasn’t himself. I wondered if he was put out at being left while I visited a relative who was suffering from cancer in the USA and, for the first time in our marriage, we argued. He believed I had done things which he didn’t know about but it wasn’t the case, we always talked to each other about what we planned to do. In addition to becoming argumentative, Prem became very critical of people and would cause offence by saying hurtful things.

Prem had suffered problems with his stomach over the years but his lack of embarrassment when he started to become incontinent was completely out of character. At that same time, my father was suffering similar problems after a stroke but there was no suggestion this had happened to Prem.

Things got so bad that I was taking him to the doctor every week. When after three visits I broke down and asked for a private referral to see a consultant. As we left the surgery, the doctor noticed that Prem was dragging his feet and refusing to put his shoes on properly. He looked like a spoilt child, treading down the back of his shoes.

It was in August and through our private health insurance Prem had a brain scan and within 20 minutes I was asked if they could go ahead and give him an injection which would enable them to look at other parts of his brain. By this stage I knew there was something drastically wrong. My husband could barely dress himself and, as the minutes ticked by in hospital, I became increasingly worried. My worst fears were realised when we were told that Prem had a large tumour in the middle of his brain.

Two weeks later we returned to hospital to be told that the tumour was cancerous and its location meant it was inoperable. The biopsy revealed that the tumour was a high-grade glioblastoma multiforme (GBM) and that, even with treatment, life expectancy was just 12-15 months. Without treatment, Prem had as little as a couple of weeks.

The situation was so desperate that you feel you have to grasp at anything. Prem was declared fit enough to have chemotherapy and radiotherapy and he started treatment in November in the hope it would prolong his life and give us more time as a family. Prem was an intelligent man and I think he knew some of what was happening. I tried to be as brave as I could. After just a few days of chemotherapy we saw the first side effects. Prem was very sick, his right arm twitched constantly and, one day, he suffered a massive seizure at home.

Eventually he was re-admitted to Queen Elizabeth Hospital Birmingham and never came home again. At first, Prem’s condition started to improve, he started talking and could walk a little. My father was also sick and things became too much to bear with both him and my husband critically ill.

I wasn’t able to make a final visit to my father as I would have wished and when I left Prem’s side to attend my dad’s funeral, I notified the doctors and nurses that I would only be away for a couple of hours and made a special request for them to look after him.

While I was away, Prem was taken for his treatment and one of our sons helped him to eat his lunch. A short while after that I believe he fell from his chair and caught a chill while he was on the floor. This led to a chest infection and, a week later, we were told he wasn’t going to live. I felt as if they were giving up on him and that he should have been given more pain relief and better care.

At 7pm on 17th December 2015 Prem passed away. It was just three weeks after I had lost my father.

Prem’s first love was music and I believe we were the first couple to have a live Asian band to play at our wedding. Music was Prem’s life and his passion. He would beat out rhythms on the kitchen table as we sang the old numbers together. I miss him so very much and am so, so lost without him. 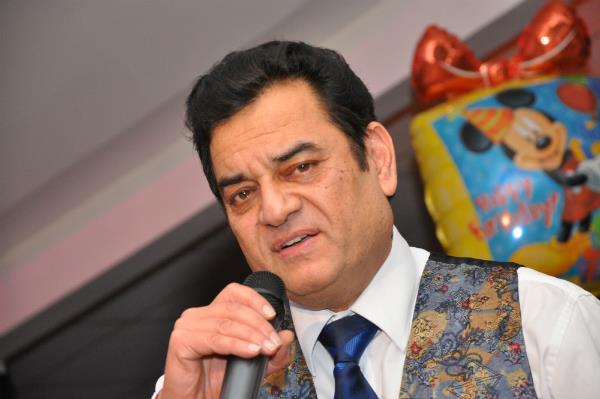