When Phil Blackmore was diagnosed with a low-grade brain tumour in April 2016, he refused to let it define him. Phil told only six people about his illness and life went on. His sudden death eight months later, on New Year’s Eve, shook family and friends to the core, but Phil will always be remembered as the sporty and driven person who lived his life to the absolute fullest.

“I went along with Phil for the results and we were both shocked when the consultant said the words ‘low-grade glioma’. The scans showed a large white mass, the size of my fist, clouding over his brain.”

Here is Phil’s story, as told by his dad, Frank…

At the age of 30, my son had already achieved so much with his life. He grew up at our family home in Whitehill, East Hampshire, with his older sister Claire, myself and my wife Liz. Throughout school and university, Phil proved himself to be intelligent, driven and ambitious and by 2016 he was living in London and carving a successful career as a Financial Analyst with Ascential PLC.

Outside of work, Phil was passionate about his sports. He played and watched football, ran marathons, completed triathlons, played golf and even had a personal trainer. It’s safe to say he was in terrific shape and he wasn’t prepared to let anything, not even a brain tumour, slow him down.

The first signs that something was wrong with Phil came in March 2016. Liz and I were on holiday in South Africa and I remember Phil kept telling us his tongue was swollen. The GP put it down to a fungal infection but now looking back, it was a result of the nocturnal fits he was unknowingly having. No one would have thought that a sore tongue was the sign of something much more serious.

A day which has always stuck with me was the following month on 9th April. Whilst we were at a friend’s 60th birthday party, I received a call from Phil saying he’d woken up on a flight with a paramedic sat next to him. He’d been in Copenhagen with work and on the return flight, he’d suffered from an epileptic fit in his sleep. That was really when it all started.

Back in London, where Phil was living, doctors at St. George’s Hospital gave him medication to control the fits and booked him in for an MRI scan at the end of June. Until then, Phil returned to normal life, working and playing sports. I don’t think any of us were ever worried that there could be something sinister happening, we just wanted to know what was causing the fits and find out how to fix it. Phil was of course concerned but he wasn’t one to live his life in fear. What probably upset him the most was having to give up his driving licence – he loved driving.

One Friday evening, a month later, the consultant at St. George’s left a message for Phil asking him to go in immediately on the following Monday and to bring someone with him. It was at this point that Liz and I began to worry; we’d watched enough films and heard enough stories to know that being called in like that wasn’t a good sign.

I went along with Phil for the results and we were both shocked when the consultant said the words ‘low-grade glioma’. The scans showed a large white mass, the size of my fist, clouding over his brain.

A close colleague of mine had died from a malignant brain tumour some years previously, aged only 37; but even though I knew how dreadful the disease could be, it never occurred to me that Phil wouldn’t recover. Yes, it was a tumour, but it was low-grade, and it was Phil so surely, he would overcome it? What’s more, the consultant told us the tumour’s position on the surface of his frontal lobe meant it was operable.

In a perhaps somewhat naïve way, we were just relieved to have gotten to the bottom of the fits. Phil took the news relatively well; he had inherited my positive outlook and decided not to let the diagnosis break him. Other than Liz, Claire and I, only three others knew about what happened that day at St. George’s.

And so, life went on as normal for the next few weeks. Phil started working on a list of 40 things to do before he was 40, which was mostly made up of physical challenges such as taking me to cycle through the French Alps with him. Meanwhile, Liz and I looked forward to a three-month trip in December to celebrate my recent retirement.

However, in early September, our optimism had been doused when at Phil’s next appointment, the consultant explained that the tumour had embedded itself within his brain. The tumour was no longer on the surface and had seeped deeper making surgery more difficult. Tim Jones, who was Phil’s consultant at the time refused to give him a prognosis as, in his words, ‘it would make you go home and spend all your time crossing days off the calendar.’ I’m glad we didn’t know how long was left – ignorance was bliss and Phil pushed on, even running the Berlin Marathon just a few weeks later.

By the time December came around, Liz and I did start to wonder whether we should postpone our trip but the children convinced us that Phil was the best he’d been in months, and possibly in the best condition he would be for a long time.

On 28th December, we skyped Phil from Singapore. He was babysitting Claire’s daughter Laura, who was 18 months at that time, and the pair of them were as upbeat as ever. It was lovely to see him relaxed and happy despite everything.

Liz and I moved on to Perth, Australia, to see in the New Year, and on New Year’s Day local time, Claire text to say we should ring her. I replied: ‘What, now?’ She said ‘yes’. so we called straight away. The police had found Phil in his flat in Mitcham, in bed and no longer alive. Our Skype call a few days earlier was the last time we ever spoke to him.

Claire was, in one word, devastated. She and Phil had been so close. Liz and I were just as distraught: how could this have happened to our fit and healthy son who had so much to live for? He had been doing so well and then just like that, he was gone. For it to happen while we were away was heart-breaking.

Since his death, Liz, Claire and I have wondered whether Phil would have thought it was better to go out on top than slowly decline and suffer. We will never know the answer but it’s some consolation that in the 31 years that Phil was alive, he lived his life to the fullest.

Phil’s funeral was a true celebration. We knew a lot of people would be attending and so we chose Putney Crematorium where 80 people could be comfortably seated. On the day, every single seat was filled, a further 80 to 90 people stood and even more waited outside. Over 200 people came to say goodbye which was such a testament to how wonderful our son was. The wake was held afterwards at a rowing club on the Thames, and more than 20 people stood up to share their memories of Phil. We were eventually asked to leave at 8.30pm that evening but we could have gone on all night remembering him.

Phil’s outlook on life has inspired many of his friends to take on challenges and raise money for research into brain tumours. I want him to be remembered as the fun-loving and outgoing person he was and I hope his story will continue to inspire others for a long time to come.


Brain tumours are indiscriminate; they can affect anyone at any age. What’s more, they kill more children and adults under the age of 40 than any other cancer... yet just 1% of the national spend on cancer research has been allocated to this devastating disease.
Brain Tumour Research is determined to change this. 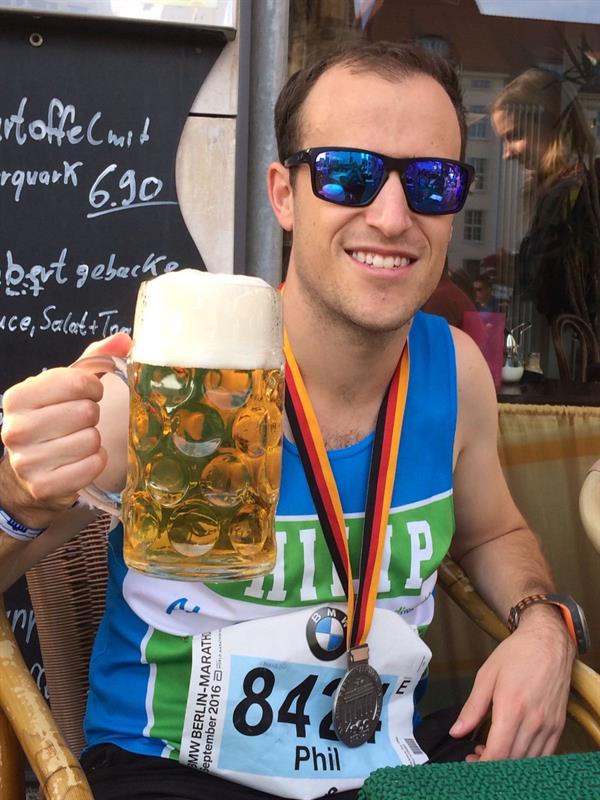