Phil was just 63 when he was diagnosed with a grade IV glioblastoma multiforme.  Less than a month later he was dead.  We never had any inkling that his condition was so serious.
Phil had always been an active man who enjoyed gardening, badminton, golf and skiing, but at the beginning of 2010 he started complaining of feeling tired and lacking in energy.  He found he couldn’t move as well as he had, especially when playing badminton and golf, but we thought that all this might have been something to do with ageing, even though he was still only 63.

I then had a major skiing accident, smashing my thigh in three places, and Phil ended up looking after me for three months, despite his lack of energy.

By June we started to take Phil’s condition a little more seriously and went to the doctor who wasn’t unduly concerned and suggested it could be down to a number of relatively minor things, including his thyroid.  We weren’t expecting it to be anything serious, because Phil had always been so well and active, so it was an incredible shock when he was diagnosed at the end of August with a grade IV glioblastoma multiforme.  I was told that it would have made no difference if he had been diagnosed any earlier as the tumour was totally incurable and inoperable.

Just a few weeks later, Phil was dead.  It was all so quick.  Fortunately I was able to get him home for the last little while and so we were together when he died.

Our two daughters and their husbands have been very supportive, but his death just goes to show how even in a thoroughly fit family, tragedy can just strike completely out of the blue.

Strangely, my daughter’s brother-in-law died in April 2010 of a brain tumour. I am now very aware of how far research into brain tumours lags behind all the other types of cancer.  That is why, as Ladies’ Captain of my local golf club, I have chosen to support Brain Tumour Research. 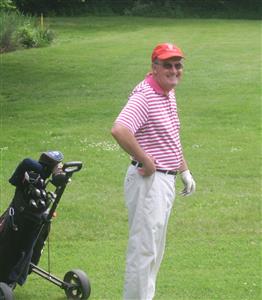