We are grateful to Paul who worked with us in July 2016 to share his story here. Sadly, he passed away in June 2017. We remember Paul as we continue our work to raise awareness of this devastating disease and to fund research to help find a cure. He will be forever in our hearts.

A well-known former member of the rugby world and a key player in the Newcastle Falcons Premiership-winning team of 1998, Paul, 49, is taking on the fight of his life. Having been diagnosed with three types of cancer, the North Shields father of five is now focusing on spending quality time with his family, fundraising and raising awareness.

“You can’t imagine how my family and I felt on discovering that I had three types of cancer, having gone to the hospital just to have my back pain assessed.”

When I was playing rugby, injuries were inevitable – my body regularly took a beating, resulting in me suffering arthritis in all sorts of places and also having to undergo two knee replacements.

But then things got a lot more serious… My family first knew something was wrong when my right side started to go numb and I began to act a little confused. Once I even put my phone in the fridge! Then, late last year, I thought I had slipped a disc because I was experiencing sciatic pain (another condition I had suffered with before) and it seemed to be getting worse. I went to A&E at Cramlington Hospital in Northumberland and a scan revealed that I had not one, but two slipped discs. I was advised to go home and rest.  However, the pain continued to increase until I lost control of my right side which had by now become totally numb.

It was then that doctors decided to scan my head and discovered I had a brain tumour.  Obviously this was a huge shock in itself, but then I was told that what they had discovered was probably a secondary tumour! I had to undergo further tests which revealed I had cancer in my kidneys that had also spread to my liver.

You can’t imagine how my family and I felt on discovering that I had three types of cancer, having gone to the hospital just to have my back pain assessed.

I told my family I didn’t want tears. I had been blessed with an amazing sporting life and now I was blessed with a fantastic family which I am so proud of.

I vowed to take on the fight of my life and as long as I lived and had the strength within me, I would continue to fight. I owed this to my wife and my family – I have five children – Ryan, 25, Lloyd, 23, Leon, 18, Paul Jnr, 15, and “Daddy’s princess” Hope Elle, nine – so three of my kids are still dependent.

After four days on steroids to bring the swelling in my brain down, I was booked in to have the brain tumour debulked on Wednesday 24th February in Newcastle’s Royal Victoria Infirmary. The operation went well and I was absolutely elated to come through unscathed as I was terrified I would either have a stroke or end up paralysed. The first thing I asked for after surgery was food!  I hadn’t eaten for 24 hours. In no time, I was tucking into a tuna sandwich and some hot chocolate. Not long afterwards, I asked one of the nurses if there was any chance she could get me a pizza! I hadn’t lost my appetite.

I was in HDU for 18 hours, then on the ward for half a day, before being discharged home. I had been told to expect to be in for a few days so it was great to find I was recovering more quickly.

Later, however, my feelings of elation having coming through the surgery were dashed when the biopsy revealed not only that the brain tumour was, in fact, the primary cancer, but also that it was an aggressive glioblastoma multiforme grade 4 (GBM). Nevertheless, I was still absolutely determined to remain positive and I reminded myself again that I have so much in my life that is worth fighting for.

Despite having three forms of cancers at the same time, I am resolute that the only way to tackle this is by making every day important and hopefully I will be in the 5% of brain tumour patients that live longer than their prognosis with this condition. After all, if I am going to have any chance of influencing my life expectancy, I can’t tackle this by being down about it!

Time is very important to me. I don’t want to waste a minute of every day. Our family motto has become: “Make every day better than the last”. In fact, the kids have become angels since my diagnosis – they don’t fight any more!

I have started a six week course of radiotherapy at the Freeman Hospital where I go for treatment five days a week. Apart from making me feel tired at times, I am, at least at the moment, feeling pretty well and normally full of energy. After the six-week period, I will get a four week break before resuming radiotherapy again and I plan to go away on holiday somewhere.

I will then start six months of chemotherapy. Depending on how my treatment goes, doctors might decide to operate on my kidneys and liver. However, recently doctors have reviewed my kidneys and said that it might not be cancer. There is definitely something abnormal on the scan, but I am getting no symptoms. As for my liver, there is a shadow there, but I haven’t had the biopsy yet so maybe that will turn out to be a cyst after all.

It’s my wife, Helen, that I worry about and my being ill is taking its toll on her. I have always been an independent person, but now I have to have someone with me 24/7 because of the risk of a stroke or a seizure. Helen is now my full-time carer and, along with help from my parents, she is driving me to all my hospital and doctor’s appointments, as well as to meetings, because I am not allowed to drive for two years after the brain surgery.

Of course, this makes it more difficult to continue with business as usual with the kids and their activities. I have always been the one to drive the boys to their games all over the country. Paul Jnr plays football for Wallsend Boys Club and represents the County. Leon played rugby for Newcastle Falcons Academy and also is on the ASSE Program at Gateshead College and represents Newcastle Thunder RL Academy, while on occasion runs out for the team I coach - North Shields First XV.

The incredible amount of support and encouragement I am getting from friends, family, former team mates and fans from the rugby community has a huge role in helping me stay positive. Despite the fact that I have led a quieter life since retiring from the sport, not attending all the rugby tournaments and dinners, it has been a really humbling experience to have received over 2,000 emails and messages since the news of my diagnosis got out. I couldn’t repay this outpouring of love and support in seven life times, let alone one, so I have decided to start fundraising and am busy getting together a chest of memorabilia to auction or raffle.

I am also keen to use every opportunity to raise awareness of the desperate need for more funding for research into brain tumours so that better treatments and ultimately a cure can be found. I appeared on ITV Tyne Tees on the day of the parliamentary debate (18th April 2016) when the government acknowledged that more should be done for the biggest cancer killer of children and adults under the age of 40 and are setting up a taskforce which will hopefully lead to a long overdue increase in funding.

I hope that when I am gone my family will continue the vital task of raising awareness. 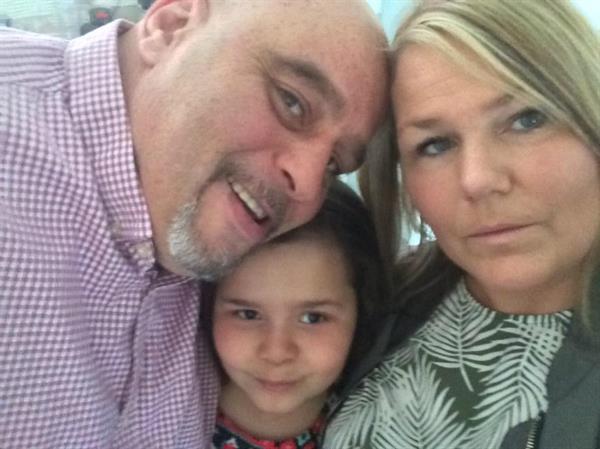