Paul Richardson, a popular and much-loved policeman, was diagnosed with an inoperable anaplastic astrocytoma at the age of 45 – the same disease which killed his dad 13 years previously. He was booked in for radiotherapy but sadly he died before his treatment began. More than a decade later, Paul’s memory lives on as strong as ever with his wife Jill, children Helen and Mark, and granddaughters Megan and Freya.

“It’s been a long time since Dad died but it can still feel so raw. I miss him the most when I think about all the parts of my life that I won’t be able to share with him… The disease has robbed us of so many memories.”

Here is Paul’s story, as told by daughter Helen…

I’ve always thought that you can tell a lot about a person from their eyes and one of the things I remember the most about Dad is how kind his eyes were. He was a caring man who just wanted people to be OK. After he died, I was so angry at how unfair and cruel it was for such a good man to go like this.

As well as caring for others, he loved to play pranks. He was a joker through and through and so much fun to be around. My brother Mark and I used to love hearing about all the pranks he played in his old police days.

He loved his job – he’d worked for the Durham Constabulary for 27 years, making friends across all manner of departments. Aged 45, he was still best friends with some of the men he’d been cadets with when he was 18. People just loved being around him and sadly it was his funeral that made me appreciate just how loved and respected he was.

Even though Dad was just three years off retirement, I know he had no plans to slow down – he just had too much energy and get up and go, which is why it was odd when he started falling asleep after work. Added to that he was losing his balance and becoming forgetful and confused.

Dad went to the GP about his symptoms in December 2004 and inexplicably he was referred for a chest X-Ray. Mum knew this couldn’t be right and rang the GP to ask what was going on. Apparently, Dad had been really confused and hadn’t been able to describe his symptoms very well, but when Mum described them over the phone, the GP realised that what Dad needed was a CT scan not an X-ray. To add to the previous symptoms, Dad had also been extremely sick since returning home from his appointment.

I was 19 at the time, living in Leeds for university, and when Mum called me to say the CT scan had found a mass in Dad’s brain, I jumped on a train home straight away. Dad was transferred from Darlington Memorial Hospital to James Cook University Hospital immediately for an MRI scan followed by a biopsy. His tumour was an anaplastic astrocytoma and it was inoperable, but radiotherapy was booked in for five weeks’ time.

Dad carried on joking and laughing, trying to keep the severity of his illness from us and stop us from worrying. He was an independent man and he couldn’t stand people doting on him and having to help him with day-to-day tasks. We think he had maybe known deep down, before his diagnosis, that something wasn’t right. After all, his dad, my grandad Jimmy, had died from a brain tumour too. Long before Dad’s diagnosis, he used to joke about headaches, saying: ‘oh it’s just my brain tumour’, but, looking back, maybe there was some truth behind his jokes. He probably thought: ‘what will be, will be’.

For the next few weeks he was in and out of hospital, coming home every now and then for his birthday, Christmas and New Year. You would think that Dad being home for Christmas was a celebration, but it was as if we’d already lost him. He was so tired and worn out that he was effectively not there.

The dynamic in our family had always been that Dad was the affectionate one whereas Mum was much more matter of fact. Mum came from a working background and had always had a ‘just get on with it’ type of attitude but after Dad’s diagnosis she was a wreck. It just went to show how much Dad had meant to her. They’d been married for nearly 25 years, and now she was facing a life without him. My brother Mark also struggled to see Dad not being his usual self and so, seeing everyone else struggling, something in me switched into survival mode. It was my responsibility to make sure everyone was OK and I was determined to be strong for the rest of the family.

The morning that Dad was due to have his radiotherapy mask fitted, Mum and I were trying to move him down some steps at home. He started breathing heavily and turned grey in the face and I could tell he was about to have a fit. He started to have a seizure and we called an ambulance to take him to hospital; somehow though I could just tell that paramedics wouldn’t be able to help him this time.

Mum went ahead with Dad in the ambulance and I followed frantically behind. To this day, I can’t remember where I parked my car at the hospital, I was in that much of a panic. Thankfully when I’d made the 999 call, the police also picked up his name and address, and realising it was Paul Richardson, they sent escort cars to make sure Mum and I were looked after. I ran into A&E and just three minutes after getting there, I was told that Dad didn’t make it. I couldn’t believe this was happening and I screamed and ran out of the room, not ready to face what I’d just been told.

In the weeks that followed, an endless stream of friends and family came to our house to offer their condolences and the phone didn’t stop ringing. After a while, Mum and I just couldn’t cope and we needed some breathing space. We booked a week in Gran Canaria to get away and come to terms with what had happened and what needed to happen next for Dad’s funeral. The outpouring of love and support was amazing, of course, but we just needed to escape the noise.

The day of the funeral came around in January 2005 and I remember the church was so full that people were standing outside during the service. He was so well respected that the Chief Constable and Assistant Chief Constable, and most of Durham Headquarters’ staff, were present too. Eerily, Darlington came to a standstill as the traffic control police stopped all cars to make way for Dad’s hearse. Mum was so touched by this as it would have meant a lot to Dad that the traffic police put aside their rivalry with the bobbies for one day.

Mum, Mark and I gave ourselves a few weeks to grieve but eventually we had to return to normal life. Mum returned to her job at Darlington Memorial Hospital, Mark back to his job and responsibilities as a dad, and me to my studies in Leeds. It was tough being away from Mum, even though I knew she had people around her, I still felt as if I needed to take charge and look after her.

We scattered Dad’s ashes in the Lake District at a fell he’d pointed out to us years before. At the time, we’d laughed and never imagined that we would be back so soon to do so.

It’s been a long time since Dad died but it can still feel so raw. I miss him the most when I think about all the parts of my life that I won’t be able to share with him. My husband Darren is just like him and they would have got on like a house on fire, but I’ll never get the chance to see that. It also breaks my heart to think Dad will be missing when we have children.

The disease has robbed us of so many memories but we make sure Dad is a part of everything we do and that he’s never forgotten. When Darren and I married, we held our wedding in the Lake District and, in his speech, Darren said: ‘Paul can’t be with us but we’ve brought the wedding to him.’ My niece Megan, who was eight months old when he died, and her sister Freya, who didn’t meet him, are always asking about Grandad Paul. And we’re always talking about him too.

Mum has been elected as Lady Captain at Darlington Golf Club and she has chosen Brain Tumour Research as her charity of the year, in memory of Dad. She wants to fundraise and raise awareness of this cruel and indiscriminate disease so that other families don’t have to experience the heartbreak and devastation that we did. 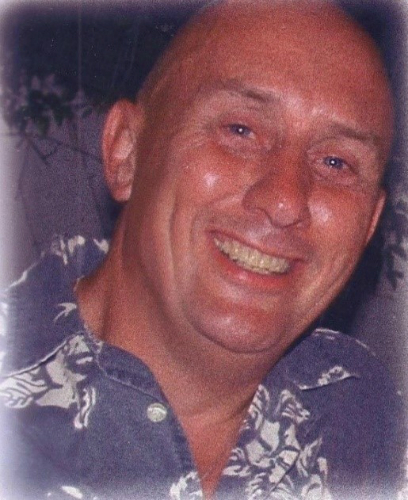