When mum-of-two Pamela Kinnersley was struck down with what appeared to be an ear infection in May 2014, she thought she was just under the weather. However further tests and scans revealed something more sinister. She had a grade four glioblastoma multiforme (GBM), an aggressive type of brain tumour. Unsuitable for surgery and adamant she didn’t want radiotherapy, Pamela chose to live her life to the full for as long as she could. Unfortunately, she died just three months later at the age of 56, leaving behind her husband, two children and two grandchildren.

“When the consultant came a few hours later to talk through her CT scans, my suspicions were confirmed. He explained she had suffered a bleed on her brain from a tumour and the neuro-oncologists at the nearby James Cook Hospital would be able to speak to us about the next steps. Though the formal diagnosis hadn’t been said, I think we all knew then that this was serious.”

Here is Pamela’s story as told by her son David…

I spoke to my mam every day, whether it was a 20-minute call for a full family update or a text message just to ask how each other was. The day I didn’t hear from her and my dad called instead, I knew something was wrong. That was the day that all our lives would change.

It was a Tuesday in May 2014 and my mam, Pamela had called my dad, Eric, home from work as she wasn’t feeling well. When Dad told me, we both said she must be feeling awful, as she had never called Dad home before.

The following day Dad called out a doctor as Mam still wasn’t feeling well enough to leave the house. The doctor thought it might be an ear infection or vertigo, and prescribed medication to help with the pain and discomfort. I got a call that night from Dad to say that she was feeling better and not to worry.

I have worked as a nurse for a lot of my adult life, so my job can make me very aware when people are unwell or their condition changes and my training needs to come into play. It can often be hard to switch this off when I am at home or interacting with family and friends, but I knew my dad was with my mam looking after her, so I felt reassured.

The next day at work I was flat out and didn’t leave until late. I had checked my phone and there was no text or missed call from Dad or Mam. After several failed attempts to call them, Dad rang me around 6:30pm that night.

He said Mam had taken a turn for the worse and had been admitted at North Teesside Hospital. Dad was at home getting some things together for Mam and I said I’d be there right away. I could tell from his voice that he was worried about her. I think that night was the quickest I had ever driven to their house.

When I arrived at the hospital and went into the room to see Mam, she was unconscious, she really looked the worst I had ever seen her. My training meant I went into work-mode and I spotted a junior doctor on the ward, who I had worked with at a previous job, and asked to see Mam’s blood results. Everything looked fine on her results, so this was definitely not an ear infection. I knew it was either a stroke or a brain tumour. When the consultant came a few hours later to talk through her CT scans, my suspicions were confirmed. He explained she had suffered a bleed on her brain from a tumour and the neuro-oncologists at the nearby James Cook Hospital would be able to tell us the next steps.

We were all devastated by the news, especially Dad who tends to hide his feelings; in that moment he was distraught. I think that was the first time I had ever seen him cry. Though the formal diagnosis hadn’t been said, I think we all knew then that this was serious. Dad contacted my brother, Graeme, who lived in Chester to inform him Mam was in hospital, he immediately travelled up and I met him at the hospital entrance to break the news. He shared our shock and disbelief.

The next day, was emotionally one of the hardest days to get through I have ever had in my life. I stepped in to help one of the nurses get Mam into a trolley to have her MRI scan and she was highly agitated and distressed; she didn’t know who I was or what was happening. It felt like a different person was in front of me, with a different personality. My jolly, fun-loving and kind Mam wasn’t there.

Everyone knew what a kind-hearted person Mam was, not only caring for my nana but also helping look after my children and her late sister’s children. She was selfless and sacrificed a lot of her own time and energy to support others. She was the last person we thought something like this would happen to and it was so sad to see her lose her personality as the tumour took hold.

The other awful thing we had to do that Friday was tell my nana, her Mam, the news. There were four children and my mam was the youngest. Nana’s eldest daughter, died of a brain haemorrhage at 38, leaving behind two small children. Telling her she was likely to lose another daughter from a neurological condition was heart-breaking.

Mam remained in the hospital for several days and when she became conscious she struggled to remember the events of the last week and asked me numerous times what was going on.

When we meet the neurosurgery team a week later to speak about next steps, they gave the blunt prognosis we were all fearful of. It was categorised as a grade four glioblastoma multiforme (GBM), a very aggressive type of brain tumour.

They explained the risks of biopsy surgery and that there was a high chance Mam could die of a stroke on the operating table, and that the risks outweighed the benefits, so this wasn’t really an option. They also discussed the option of an aggressive course of radiotherapy, but that was unlikely to control the tumour for long. Mam was adamant that she didn’t want any treatment and wanted to go home as soon as possible to be with her family.

The following months were hard on all the family as we tried to make the most of the time we had together. To add to the pain we were experiencing, my wife’s mother had also been diagnosed with cancer the Friday before my mam was taken ill.

It was mid-August when Mam collapsed at home. When I came to see her, I could clearly see the signs that she didn’t have long left. The local Macmillan Cancer Support team got everything in place so that my mam could have her wish to stay at home. The tumour gained control of her and after eight distressing days she died, peacefully at home, surrounded by her loving family. It was upsetting to see first-hand with a loved one what an evil and destructive disease a brain tumour can be.

At the time the consultant told us it was a GBM I had asked the doctor, away from my family, how long Mam had and he gave the prognosis of a maximum of 12 weeks. I didn’t tell my family at the time, but she died exactly 12 weeks from when she was diagnosed.

Looking back there are a few things I might have done or said differently, but with events like this you function often on your intuition and experience, and in my case my medical background. I don’t think anyone knows how they will react when something like this happens with someone you love and care for, you just try to support them as best as you can.

Mam knew the tumour was going to end her life and showed great bravery throughout. We all think about Mam every day and will remember her for the kind-hearted, funny and beautiful person she was. Creating wonderful memories with her family was everything to my mam and it is something that I try to live my life by. 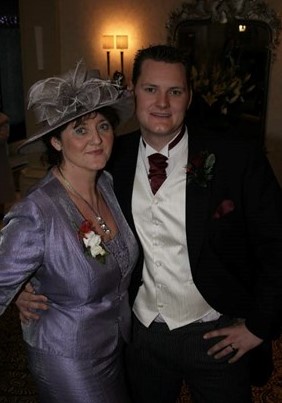