Pam was the proud mother of four children, five grandchildren and two great grandchildren. She used to go out to the US for six months over the winter every year to visit her sons and daughter who lived there and it was on one of these visits that her daughter first became aware of certain personality changes.  Eventually Pam was diagnosed with a glioblastoma multiforme grade IV.  She passed away just over a year later in 2011
My mother lived with her sister and brother-in-law in the UK, but used to come out to the US where my brothers and I live (my brothers in LA and me in North Carolina) to visit us.  She would come every November and stay until April.

In 2009 when Mum came as usual I noticed that she was dragging her foot and not wanting to go for walks like usual (Mum was 71 at the time).

I also started to pick up on several other more subtle changes.  For instance, Mum always used to love to cook and would always cook a main meal every day.  But suddenly she forgot how to do simple things in the kitchen and she also stopped dusting and cleaning – Mum had always busied herself cleaning and tidying around the house.  Another thing was she had always loved shopping and would often say “let’s go to the mall”, but that stopped.  She didn’t seem to be as sociable anymore, nor as happy as previously.  It was all a bit frustrating.

I spoke to my sister-in-law in Los Angeles and she confirmed that Mum hadn’t seemed herself when she was with them.

After Mum went back to the UK, I had a message from my uncle to give him a call.  I instantly knew that it was something to do with Mum.  He was wondering whether we had had an argument or something because she hadn’t said a word about her stay with us.  It was all very worrying.

Mum went to see her GP who diagnosed Alzheimer’s.  It didn’t seem right to me and all a bit too sudden.  Over six or seven weeks I kept on trying to get a referral for an MRI scan.  The GP, I think, got very frustrated with me but was adamant that an MRI wasn’t necessary.

Then my uncle thought that maybe Mum had had a stroke.  The right side of her face seemed partially paralysed and she couldn’t write.  Still the GP refused an MRI, so my uncle decided to take her straight to A&E where they found a tumour, which turned out to be a glioblastoma multiforme grade IV.  It was located in her left frontal lobe which was the reason why her personality had been affected.

At first we were happy that it was not Alzheimer’s and thought that a tumour could be easily removed, but then we found out the prognosis for the actual tumour Mum had.  My heart was crushed.  Months and months I spent on the internet, searching for new technology, the next miracle drug, happy-ending stories etc…  It was exhausting both emotionally and physically.  I know now that it was not a healthy thing to be doing, but at the time I wanted to save Mum and thought maybe, just maybe…

Mum’s reaction to her diagnosis was short-lived.  I had a little cry to her on the phone (it was so hard being thousands of miles away) and then she never talked about it again, or even complained about the subsequent deterioration in her health.  Incidentally, Mum’s father died from a brain tumour when she was three years old and, coincidentally, her step-father also died from the same condition.

After surgery to remove as much of the tumour as possible, Mum’s brain was very clear and sharp and she continued to enjoy regular trips to the bingo.

In June 2010, Mum went on a course of radiotherapy (6 treatments) to shrink the tumour.  The doctor didn’t want to give her more than that as it can knock people off their feet (especially someone of her age), but Mum seemed to take it with a pinch of salt.  In fact, one evening after an afternoon radiotherapy session, she and my aunt went to bingo.  She was not going to let this thing interfere with her social plans.

When Mum succumbed to pneumonia in February 2011, I decided to come back to the UK for the first time in 15 years.  I was fortunate to be with her for the last six months of her life.  She lost the use of her legs and hated that she had to have a wheelchair, but in usual “mum-fashion”, buttoned her lip and got on with it.  It was hard for me to get used to the fact that for someone who had always been so independent, all of a sudden we were, for the first time, taking care of her.

For the last ten weeks of her life, Mum was bed-bound and two weeks before she passed away she stopped swallowing so we took the decision to stop her steroids.  Throughout her battle with the brain tumour, Mum remarkably had no headaches and only two seizures (and both of these came towards the end).

The sister at the nursing home, where Mum had gone by this time, remarked to us how in the last ten years she had seen the number of brain tumour patients increase incredibly and out of 37 inpatients, three had brain tumours, including Mum.

When Mum finally passed away on 31 July 2011, I felt that, although she had now gone from me in body, in fact I lost her a long time ago.

Her funeral was beautiful with the church packed with her friends and family – she had lived in the same village for 27 years.  We all feel the loss of such a vibrant, outgoing lady.  I will always remember her courage, her laughter and, most of all, her smile. 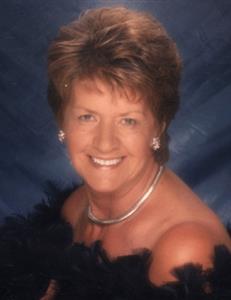