Baby Oliver from Blackwood in South Wales was just 11 months old when he died from an extremely rare brain tumour. Despite undergoing brain surgery at 15 weeks old and seven months of gruelling chemotherapy, the tumour was too aggressive. He died on 22 July 2020, at home with his parents and older brother Harley by his side.

Since then his mum, Zara, has been working with Brain Tumour Research to raise awareness and funds to help find a cure for the disease, in the hope no other family will suffer the same devastation and loss.

Here is Oliver’s story, as told by his mother, Zara…

Since losing Oliver we have connected with other families dealing with their own brain tumour story. The lack of awareness and funding into research for this disease makes it feel as if it’s rare when in fact there are so many children who have lost, and will continue to lose, their lives to this disease if the lack of funding continues as it is.

I first noticed something strange with Oliver’s eyes whilst at my eldest son’s rugby club Christmas party in December 2019. You could only see half of his pupils, with more of the whites of his eyes showing, and they were in a fixed position which we later found out was known as ‘sunset eyes’. I thought it could be from the loud music or lights at the venue.

The next morning we were due to drive to Minehead for a family holiday and Oliver was presenting with the same wide eyes. NHS 111 told us to monitor Oliver and call if there were any changes. 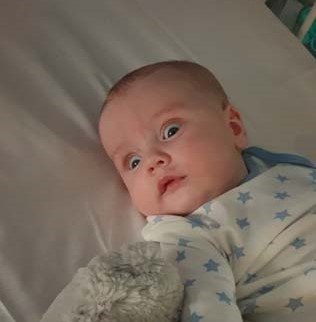 The car journey to Minehead was very quiet. My husband Nathan and I were very concerned for Oliver’s health. We dropped Harley off at the holiday home with friends we were travelling with and took Oliver to get checked at Taunton A&E.

He was checked over but the doctor wanted a second opinion and we were referred to paediatrics. The doctor took one look at Ollie and booked him in for an MRI scan first thing the next day.

That night was very anxious for us all, Ollie was unsettled, Nathan and I didn’t know what to do with ourselves. At this point, Ollie was 15 weeks old and I was still breastfeeding. Our friends were a great support and helped us look after Harley.

Ollie went for his MRI and was gone for what felt like an eternity.

We saw people walking up and down the corridor outside the waiting room and a tense feeling washed over me. I knew something was wrong.

“A nurse walked towards our room with a box of tissues and two glasses of water and we were told the news that Oliver had a brain tumour.”

I came out of the room and screamed.

Oliver was blue-lighted to Bristol Royal Hospital for Children and Nathan travelled with him. I arrived expecting to find Ollie hooked up to machines but instead was greeted by a happy baby, bouncing on his daddy’s knee smiling away. I thought to myself, have they got it wrong? I wanted them to have got it wrong. 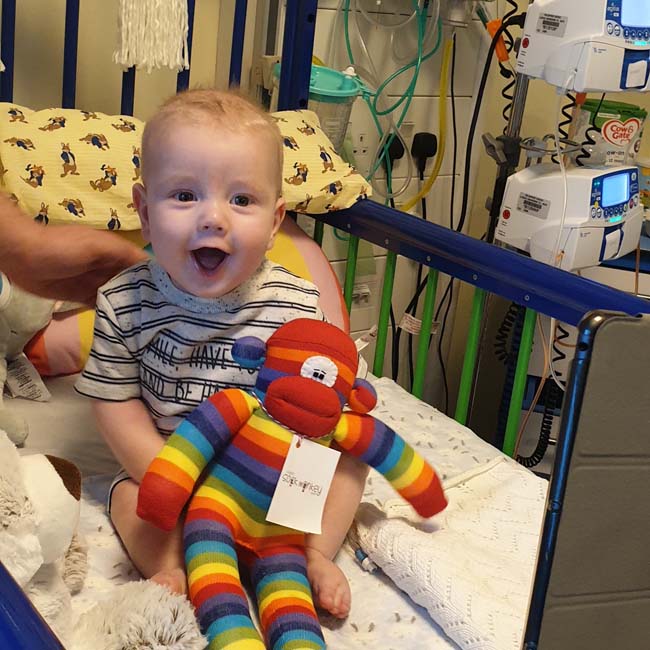 We had put our trust in neurosurgeon, Dr Carter, who said he could remove the whole tumour. Hearing those words I thought to myself, this man can save our baby. But I couldn’t help running through different scenarios in my head, including never seeing Oliver alive again.

After surgery, Dr Carter walked through the doors of the ward, he looked like Santa Claus and stood in the doorway and said “I’ve got it all”. I wrapped my arms around him and felt elated. 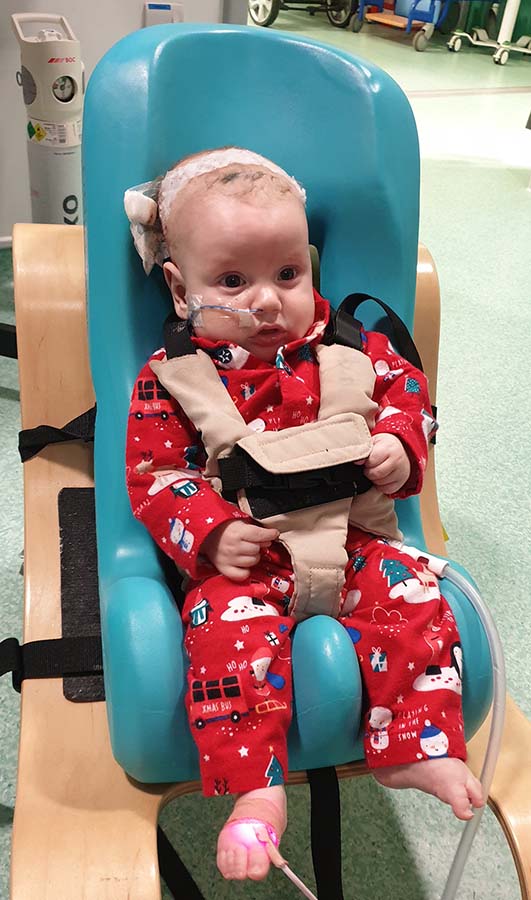 Post-surgery and as Christmas approached, Oliver started to have focal seizures. His body would jerk and his lips smacked together. A scan suggested the seizures were a result of the surgery which had moved his brain and they would stop as everything settled down. For Ollie, this wasn’t the case and he was placed on medication to ease the seizures.

“We spent Christmas in hospital and on 29 December 2019 histology results came back inconclusive due to how aggressive and rare the tumour was.”

The team at Bristol had consulted with professionals from across the world and no one knew what we were dealing with. All they could tell us was that it wasn’t genetic. 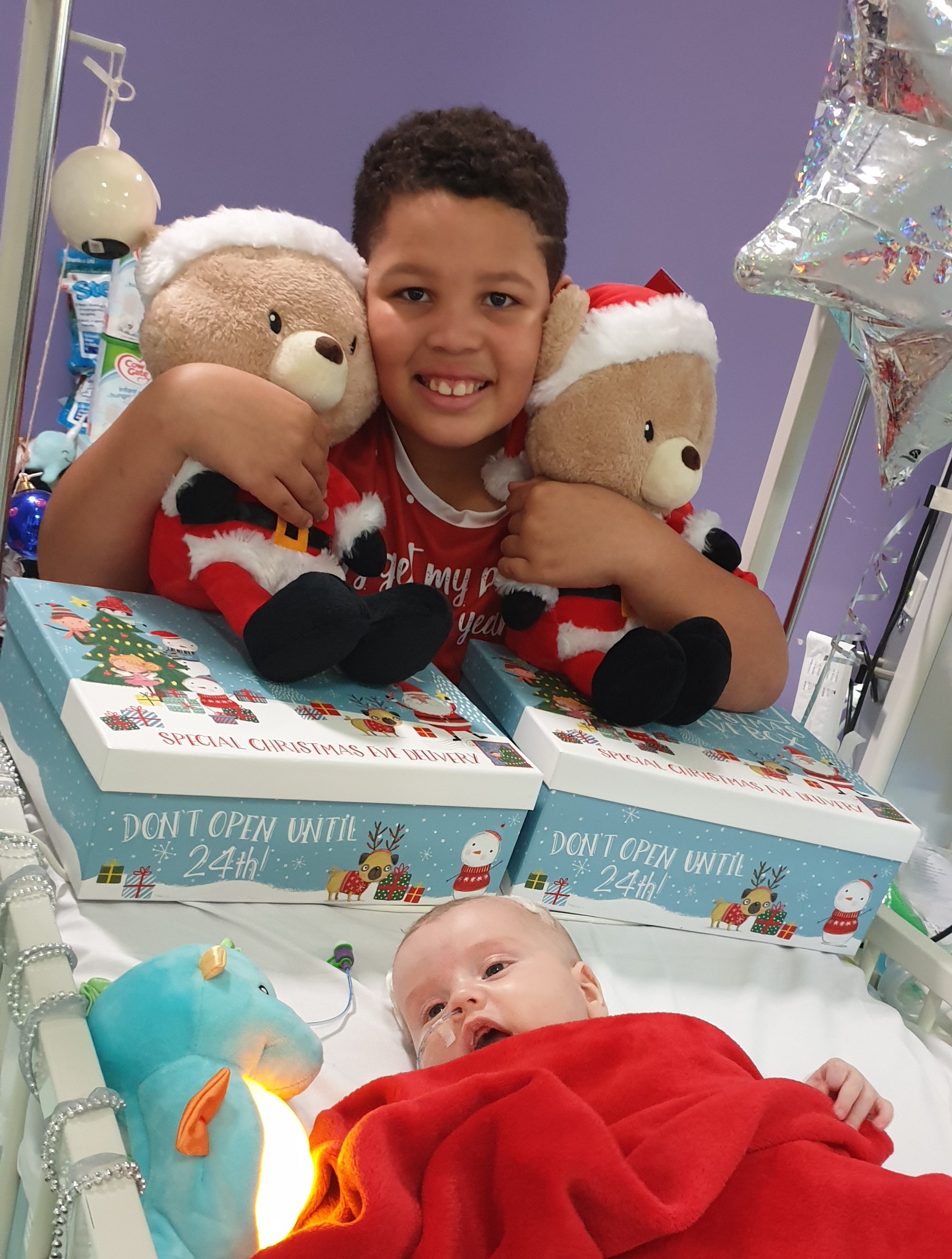 For a week in January we returned to some kind of normal, and we spent time together as a family.

In the new year, Oliver had four rounds of chemotherapy. In March the dose was increased and he had a stem cell transplant to aid his recovery.

The higher dose of chemotherapy made him very poorly. Me and Nathan took it in turns to be with him during treatment which took a toll on his tiny body.

The inside of his mouth and stomach were burned from the toxicity of the chemo, his liver was enlarged and tummy swollen. Ollie developed mucositis, and his heart rate increased to more than 225bpm. Another scan showed he had developed veno-occlusive disease.

It was May before we could return home fully and even then I had to give him two daily injections to help his body heal.

Days later Oliver was back in hospital after we noticed his head was tilting to the left. Within hours I got the call from Nathan I was dreading. The tumour had returned, this time on a completely different part of his brain and was already 1cm diameter.

I went to hospital armed with questions, ready for a plan of action as to how we were going to save my baby but there were no options.

Radiotherapy wasn’t an option due to his age and after pushing and pushing it was agreed that Ollie would have a second surgery on 28 July 2020.

On 17 July we took both boys to our favourite holiday destination in New Quay, West Wales. Ollie had been happy throughout this whole ordeal but during this trip something changed, he was grizzly which was unlike him – it was from that moment I knew we were losing him.

We went to the beach and I kept thinking, this is the first and last time he’s going to put his feet in the sand.

On returning home, Ollie developed facial palsy and struggled to stay awake. The oncologist from Noah’s Ark Hospital in Cardiff visited and told us Ollie had suffered a stroke. She sat on the edge of the bed she told us that our baby was too poorly for surgery.

Our world was shattered. We asked how long, and they said it could be weeks or it could be months.

On 22 July we decided to hold an early celebration for his first birthday (29 August), knowing he might not make it to the next month. 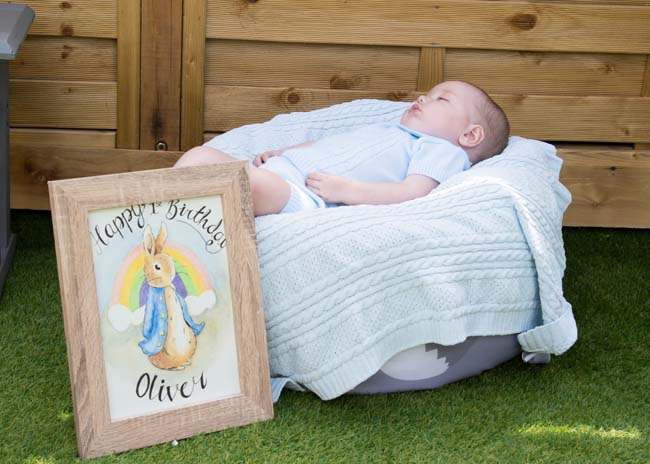 Family and friends gathered around us and joined us to make the day special. We couldn’t help but feel consumed by the thought of losing Oliver and what was about to come. I cried as we sang happy birthday, Oliver being held tightly in Nathan’s arms. 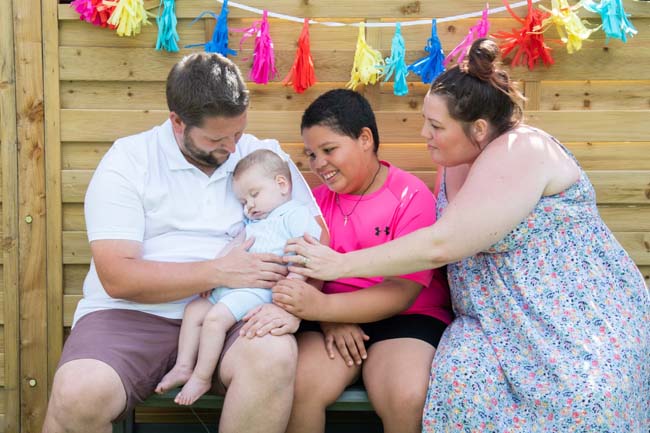 Later that night we said goodbye to our friends and prepared for bed. Nathan, Harley and I stayed in the same room. Harley laid next to Ollie, talking to him, telling him “it’s okay to go to heaven, I am really proud of you and I will always love you”.

What we went through as a family was extremely traumatic and through Oliver’s journey we have met other families who share a similar story. Brain tumours have a huge impact on the person living with it and the people around them. For as long as I can, I will support Brain Tumour Research to help raise awareness of this disease to drive an increase in funding so we have the knowledge to treat and eventually cure people who are diagnosed.