We are grateful to Nicola, who worked with us in August 2017 to share her story here. Sadly, she has since passed away. We remember Nicola as we continue our work to raise awareness of this devastating disease and to fund research to help find a cure. She will be forever in our hearts.

Nicola Goodwin thought she was showing signs of early menopause when she struggled to answer a question at airport security. The 48-year-old mum of two, decided to trust her instincts and get checked out. After numerous tests Nicola was diagnosed with a grade three anaplastic astrocytoma, requiring surgery and treatment.

“I remember my shock when I got the test results, showing the initial diagnosis had been wrong. I actually had an active grade three anaplastic astrocytoma and I would need surgery followed by further treatment. So, no waiting around.”

I’ve been at my company US bank BNY Mellon for nearly 25 years in several different roles and became an auditor for them in 2012. As part of my job, I often found myself either on a train to a UK city or in an airport travelling to somewhere in Europe. It was October 2013 when my life changed while preparing to board a flight to Dublin at London Southend airport.

I was just about to go through security when it happened. The lady asked what was in my bag, but instead of being able to answer her question, gobbledygook came out. I repeated myself and the same thing happened. I swear she thought I was being silly as she just looked at me strangely and let me through into departures. I had felt a tingle down my left arm at the time, but after about five minutes everything was back to normal.

As I then walked to get coffee, I started rehearsing my order, just checking I could do it. I was 44 and it did cross my mind that this could be the early signs of the menopause. So, to reassure myself when I got off the plane in Dublin, I emailed my mum Lesley.

I’m an only child and the relationship I have with my parents is very special. My mum and I are very close, so I knew she would be the best person to speak to. Within minutes my mum called saying I had really frightened her. The email I had sent to her didn’t make sense and all the words and sentences were jumbled up. I told her I now felt OK, but would see my GP as soon as I returned home. I didn’t have any more episodes for the rest of the trip.

I told the doctor about my speech issues and she said it might have been a mini stroke. As I was under 50, in reasonably good health and looked OK she insisted that I went to see a specialist at the hospital. I’m lucky to have private healthcare through work, so was able to be seen pretty quickly.

Not anticipating bad news, I had gone on my own to get the MRI results. When they told me it was a brain tumour, I felt sick. The consultants then tried to reassure me that it was low- grade and nothing to worry about. We have never experienced cancer in the family and before my diagnosis I didn’t even realise that a brain tumour was a type of cancer.

A further MRI revealed the tumour was a benign grade two glioma and was about the size of a 10p coin, located on my left temporal lobe. I was surprised that they didn’t want to operate; they simply told me that they would watch and wait and offered me a scan every six months.

This wasn’t the news I wanted, and after looking online at other people’s stories and what treatments they had received for a low- grade tumour, I was very uncomfortable with just sitting around waiting. My dad insisted I get a second opinion, as I really felt that something wasn’t quite right and he supported me in going for further tests at Queens Square Hospital in Holborn.

People may say that I’m a career woman but, first and foremost I’m a mum, and my boys are everything to me. Michael and Craig were 18 and seven at the time I was diagnosed. Michael had only just finished his A-Levels, so I was pleased that my news hadn’t impacted on his results, as I would have felt awful. Being honest with Michael was important to me, taking the decision to tell him everything that was happening, but with Craig I kept the information very limited. Telling him “mummy has to have a lump removed from her head and might lose some hair”. He was only young, so the words cancer or tumour were never mentioned around him.

I remember my shock when I got the test results, showing the initial diagnosis had been wrong. I actually had an active grade three anaplastic astrocytoma and I would need surgery followed by further treatment. So, no waiting around.

My company was amazing and really supported me throughout the whole thing. I have been with them a long time and when you go through a serious life event like this and you have children, you fully appreciate the support. There were a couple more times that my speech was affected at work, but they didn’t make a big fuss about it and were very supportive about me needing time away to attend hospital visits.

The surgeon was able to remove 50% of the tumour and I was then given courses of chemotherapy and radiotherapy over the following months. I asked lots of technical questions about what was going to happen and the doctors were great in answering everything for me. They joked “not you again”, as they knew I would come to every session with a new query.

The statistics were shocking and it annoyed me that a lot of people were unaware of the different types of brain tumours and that there were different gradings. I had no idea that brain tumours kill more children and adults under the age of 40 than any other cancer, yet just 1% of the national spend on cancer research has been allocated to the disease.

I’ve heard many stories about people suffering with sickness and feeling tired from chemotherapy, but I actually felt OK. The nurse had warned me that my hair was likely to fall out after radiotherapy, though nothing prepared me for standing in the shower and holding clumps of my hair, it came as a bit of a shock.

I responded well to treatment, though in the months that followed I also had to deal with the breakdown of my second marriage, as well as trying to recover from surgery and be a single mum. Looking back, I don’t think my husband coped very well with the news of the tumour and things went from bad to worse. I really had to lean on my mum for support, she was my rock through the whole ordeal.

Three years on I haven’t had a single speech problem, my short-term memory isn’t great, but I was told before the treatment that it might be affected by the radiotherapy. As I’m now 48 I feel like I can get away with being a forgetful mum.

Following the treatment there is currently no sign of the tumour. The boys are doing well and are bugging me to take them to Disney World next year. However, as my type of tumour may come back at any point, I’m a little apprehensive of booking things too far in advance.

When I think back to that day at the airport, where I was worried and confused that my hormones were playing up, I’m just glad that I got myself checked out. I would advise anyone to trust their instincts and if something isn’t right or doesn’t feel normal, do something. This disease really has taught me that time is precious and you need to trust your intuition. 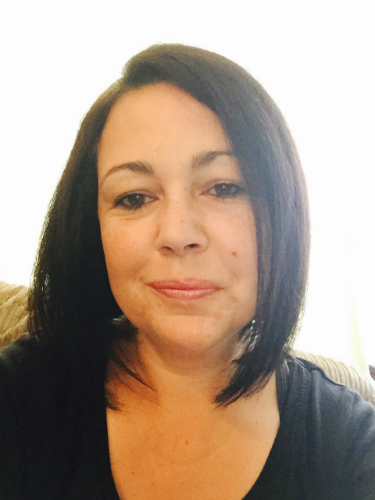