Neville was a loving husband and proud father and grandfather of two sons, a daughter and four grandchildren.  Once his brain tumour was finally diagnosed, he survived barely another 14 weeks, yet his GP had insisted his symptoms were down to a mild stroke.  He was physically very fit, enjoyed his garden and walked regularly.
It was quite apparent that my father wasn’t his normal self and hadn’t been for over a year.  He was quite impatient and things just didn’t seem right.

Six months before going into hospital Dad couldn’t touch the back of his head and had started to lose some of the sensation in his fingers which, in turn, made it difficult for him to do the buttons up on his shirt, or tie his shoe laces

Despite numerous trips to the surgery over a few months, Dad’s GP put his condition down to a mild stroke.   You put faith in doctors because they are the experts, but, I have since discovered, GPs often don’t recognize the signs of a brain tumour – and, to be fair to Dad’s GP, in his 20 year career he had only come across one patient with a brain tumour before and then all of a sudden, including my father, he had three brain tumour patients all in one year.

Eventually, my mother became more and more frustrated at the lack of progress in improving Dad’s situation that she told the doctor she wished to go private so that she could have an immediate consultation to discover the root of the problem.  At this point the GP relented and booked him that day to have various checks at the hospital.  Suddenly we were confronted with the reality that Dad had an aggressive brain tumour, which turned out to be a grade IV right posterior parietal gliosarcoma.  He was given a prognosis of only 12 to 18 months maximum and the doctors told us that they could only delay his death.

It was a terrible shock – we really didn’t have any idea that his condition was so serious, but Dad took it quite well, so we tried to keep a positive outlook.

The day after Dad was diagnosed he lost the use of one side of his body.  Surgery was performed in August 2010 to remove as much of the tumour as possible.  The operation went well and Dad seemed to be improving.  They even got him out of bed and moving around with the help of a Zimmer frame.  It gave us a lot of hope.  Dad felt so well that he was planning to take the family away for a weekend together.

Tragically my father never recovered.  It was only three or four weeks before he passed away that it really sunk in that Dad was going to die.   Just fourteen weeks after his diagnosis Dad died on the 29th October 2010.  Mum had spent every day of those fourteen weeks with Dad in hospital.  He was 74 years old.  It was very distressing.

My mother is finding it very difficult without Dad.  He and she used to do everything together.  Fortunately my sister and brother both live very near Mum and, although I live further away, I go home every weekend - so we all do our bit to make sure she is well-looked after.  But we can’t take the place of Dad. 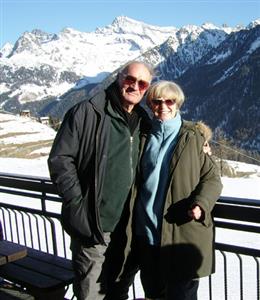