Destined for a bright future as a performer, Naseem Pishvaie battled with an aggressive glioblastoma multiforme (GBM) brain tumour for three years. She first became ill just a year after following her dream by attending a school for the performing arts. In the difficult times that followed she managed to keep her sense of humour and remained positive. She died in 2009, just a few weeks short of what would have been her 22nd birthday.

“My daughter was always beautiful and remarkable but the depth of her beauty was never more apparent than in the courage with which she faced her illness. To battle such a serious illness and treatment with its undesirable side effects showed tremendous bravery, dignity and determination. We have been told that she was an inspiration to the patients she knew at the hospice day centre which she attended weekly.”

Naseem was born on 27th October 1987. The week before her birth there was a strong hurricane, the likes of which the UK hadn't experienced for decades. Coincidently, the name Naseem means gentle breeze so we are led to believe.

Naseem went to Ballacloan, Fairfield and Ballakermeen schools here on the Isle of Man. A talented dancer who also loved to sing, she performed renditions of the Spice Girls “If you wanna be my lover” and “M.I.B” Men in Black at her primary school. Although she lived closer to the schools than many others, she was often in after the bell. Her excuse was that she was fashionably late!

She loved to sing to her music and was a big fan of Michael Jackson. When she became ill she bought a big poster of all his album covers. It still hangs on her bedroom wall. Naseem just loved his beats and, as she grew older and went out with the girls, she would love to dance with her friends.

Up to the age of 16, Naseem pursued her love of dance by entering local competitions. She went on to perform with the Manx Operatic Society and in other stage productions where she shone as she showcased her talents. She developed a real taste for performing and also went on stage at the Gaiety Theatre.

Everyone knew that Nas, as she liked to be known, had the world at her feet and was destined for London’s West End. She ventured off to The Hammond School in Chester which specialises in dance and the performing arts. She had a wonderful year there and made many friends. Just the day after taking part in her end of year show she became poorly and our lives took an unexpected turn. Nas was diagnosed with a grade 4 glioblastoma multiforme (GBM) brain tumour.

She fought her illness for three years with determination, undergoing numerous rounds of chemotherapy and radiotherapy. She always tried to be positive and find ways of dealing with the situation. Her sense of humour usually prevailed over any upset or weakness she might have felt. Despite her illness and treatment, Nas managed to start painting again, she sponsored gorillas through the Dian Fossey Gorilla Fund and looked forward to the days she spent with new friends at the Rebecca House hospice day centre.

On both her 20th and 21st birthdays, Nas made collections for the hospice and Nicola’s Fund, a charity set up in memory of another Hammond School pupil lost to a brain tumour in 2005.

After Nas had surgery and chemotherapy we set about fundraising to pay for her to try a new drug. While many people in the community donated generously, Nas was also doing her bit. She would do sponsored walks around the island with her dog Maximus. Although she was affected by her treatment, she was committed to making her own contribution to the fund and we had many a happy time walking up the beautiful Marine Drive.

My daughter was always beautiful and remarkable but the depth of her beauty was never more apparent than in the courage with which she faced her illness. To battle such a serious illness and treatment with its undesirable side effects showed tremendous bravery, dignity and determination. We have been told that she was an inspiration to the patients she knew at the hospice day centre which she attended weekly.

Nas died on 14th October 2009, the day her charity Naseem’s Manx Brain Tumour Charity was legally registered. She was just 21. 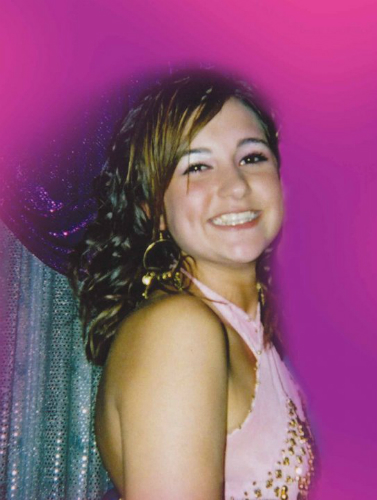