We are grateful to Morgan and his wife Elisha, who worked with us in December 2020 to share his story here. Sadly, Morgan passed away on 10th January 2021. We remember Morgan as we continue our work to raise awareness of this devastating disease and to fund research to help find a cure. He will be forever in our hearts.

Morgan was 22, engaged to his childhood sweetheart and a proud dad to one-year-old Riley when he started having seizures and was diagnosed with a glioblastoma multiforme (GBM) brain tumour. He did his best to keep his young family positive whilst going through chemotherapy treatment during the coronavirus pandemic, but then received heart-breaking news that the tumour was continuing to grow and all treatment was being stopped.

“I never expected at the age of 21 to be signed off work with stress, looking after our two-year-old son Riley and his 23-year-old dad diagnosed a year ago with an incurable and terminal condition. We are getting ready for Christmas, knowing it will more than likely be his last.”

Morgan, or Mo as I call him, and I grew up together, having first met when we were both young children at Grays Nursery, in Newhaven. We drifted apart for a few years, but met up again when I was 16 and he was 17. Although we had both changed a lot we just instantly clicked.

Before we knew that Mo was terminally ill, we used to go out in his sporty Ford Fiesta, listen to Craig David, drink caramel frappés and sit on the beach. It seemed we didn’t have a care in the world.

Mo has always been into his music, loving playing the guitar and having jam nights with friends. He is always up for a laugh and being silly.

In June 2017, we had our first holiday together and travelled along the Spanish coast for 10 days in a camper van. It was magical. 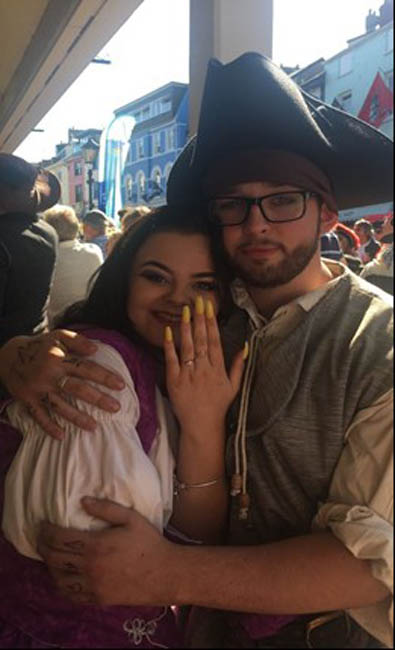 On 6 May, 2018, we were at Brixham Pirate Festival when Mo, dressed as a pirate himself, got down on one knee and proposed. I was four-months pregnant at the time.

“Riley was born on Mo’s birthday – 3 October – literally 21 years apart. It’s probably why their bond is so special. I couldn’t ask for a better dad for Riley in contrast to my own dad who left when I was born.”

And I know he loves me and Riley 100% through everything he does – he is always so kind and thoughtful.

Mo was super healthy, a body-builder and really into fitness and boxing. He had amazing abs and a six-pack and went to the gym every night after work.

But, in October 2019, Mo had a tonic-clonic seizure while at his brother’s wedding. I knew immediately he was having a seizure as, along with my mum, I had cared for my severely-disabled older brother Callan for as long as I can remember. He has cerebral palsy, epilepsy and brittle bone disease and can’t walk or talk and has been in and out of hospital many times. Looking after Callan was the reason why we never went away on holiday. 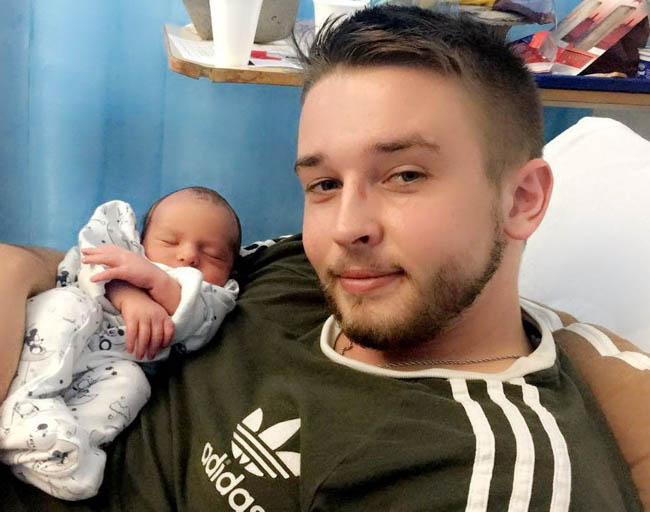 We took Mo to hospital, but they kept telling us he had fainted. Then he had three seizures in one month – two in one night. This time I stayed firm and refused to leave the hospital until he had a CT scan. He was kept in hospital overnight and put on the anti-seizure drug, Keppra. A day later in November 2019, we were given the shocking news that a mass had been found in his brain, which they believed to be a non-malignant glioma.

Mo underwent surgery on 14 December 2019 but it wasn’t possible to remove all of the tumour.

“We were told that the tumour was like a squid and that they had managed to remove the head but the tentacles remained. Biopsy results confirmed the worst news – Mo had a glioblastoma multiforme (GBM). It was heart-breaking to hear that it was fast-growing and very aggressive.”

A month later, Mo started on radical chemotherapy and six weeks of radiotherapy. The first two scans showed that the tumour remained stable, but then the third revealed that it was growing back. 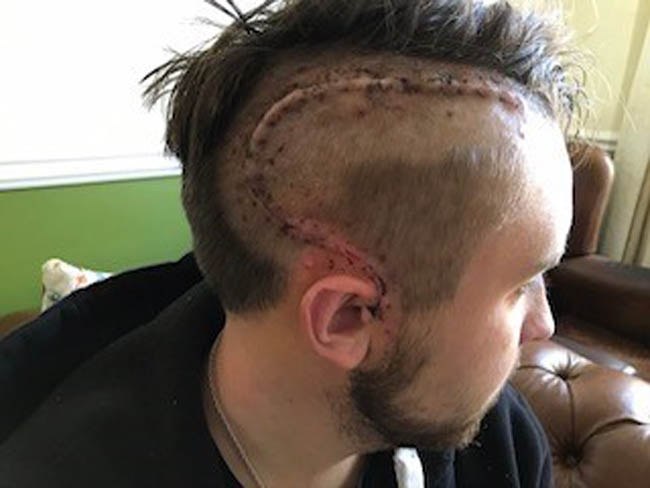 As if that wasn’t enough of a bombshell, the surgeon told us it wasn’t safe to do another craniotomy so Mo started on PCV chemotherapy. He has had three cycles so far but we can see he is deteriorating. His left side isn’t reacting how it should and his face has dropped on the left. He has also lost a lot of peripheral vision which means he often falls over because he doesn’t see things properly.

Devastatingly, a further MRI scan on 8 December revealed that the tumour has spread throughout Mo’s brain and all treatment is being stopped. He may live for just a few weeks. We knew what was going to happen but we always hoped we would get a bit more time.

Whilst I am finding it very difficult to cope with this latest development, after the initial shock, Mo seems to be holding it together a lot better than me. He is totally amazing.

Mo has always done his best to stay positive and keep everyone else’s spirits up. It’s what I love about him. He is always so committed – just like when he was studying for his gas and heating engineer exams.

“I can’t believe that within a period of nine months, I had got pregnant, taken on a mortgage, got engaged and had a child, only for a year later to find out that Mo had an incurable brain tumour. A year later we have now been told he has exhausted all treatment available on the NHS.” 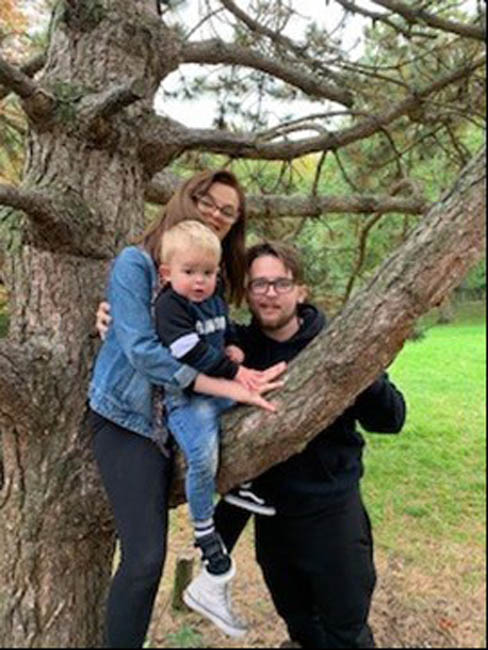 We are desperate to have another child before it’s too late. Our wish was always to have four kids. I did fall pregnant again in October last year, but on the day my brother’s twins were born, I lost the baby. Sadly, because we already had a child, we weren’t offered the opportunity to freeze sperm ahead of Mo’s chemotherapy treatment and it’s too expensive to store sperm privately. My dearest wish is for Riley to have a brother or sister.

We definitely do things the hard way and our luck couldn’t be worse right now, but I have to remind myself we have incredible support from family and friends.

“Mo says that without me he would have given up ages ago, but being with me and Riley he has something to fight for.”

I have recently changed my surname by deed poll to Sandalls – Mo’s surname and I think of Mo as my husband even though we aren’t actually married. We hope to have saved enough to get married officially next year, although Mo is deteriorating so rapidly now, I hope we have time. 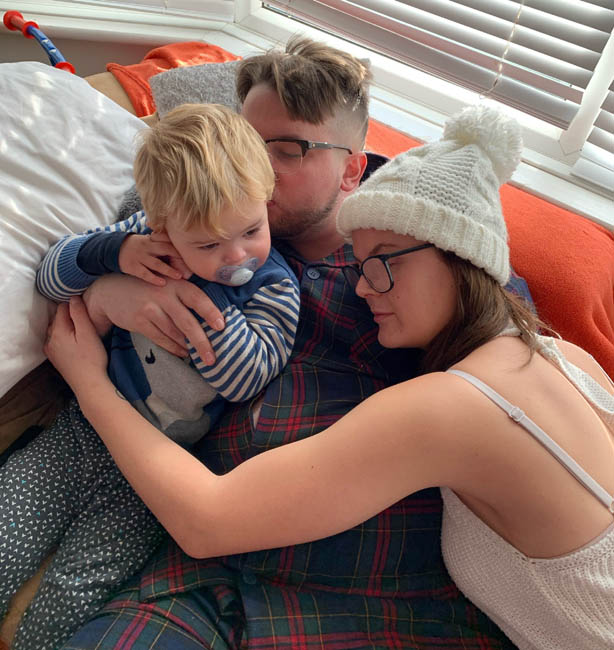 It’s been a terrible year with the coronavirus pandemic on top of everything. Sometimes I find it so hard just to get out of bed despite the hours of counselling I’ve had to try and help my mental health. I find the best way to cope is to support others because I can’t bear to think of people struggling alone. To try and stay positive, we have decorated our flat like it’s a Christmas grotto. We want to make this Christmas really special because it is more than likely to be Mo’s last one. 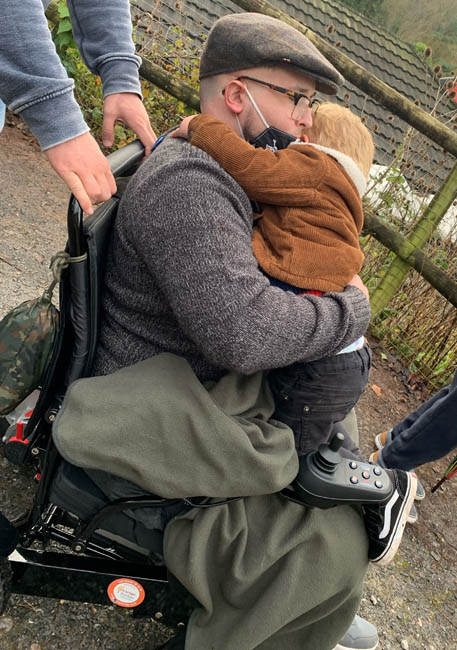 We are supporting Brain Tumour Research to find more effective treatments for brain tumour patients like Mo and ultimately a cure and have completed a Santa Dash. We walked with family and Mo in a mobility scooter from Denton where I grew up to the Old Boot public house in Seaford and back again – a distance of 10 miles. The Old Boot is where we went on our first date and Mo told me that one day we would get married – I hope so much his prophecy comes true. 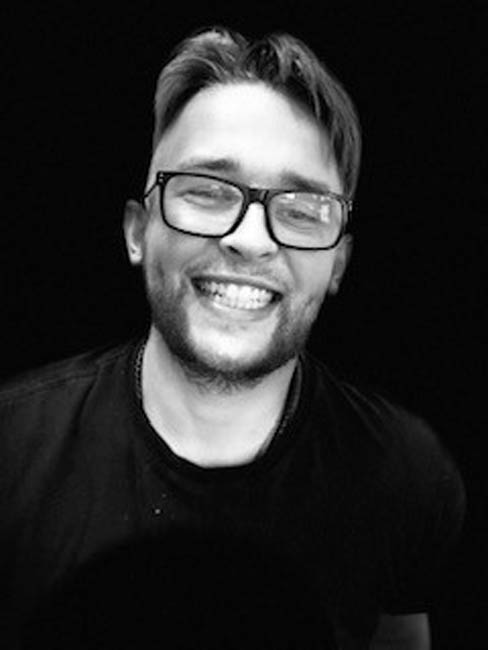