Mike was diagnosed very dramatically in August 2007.  He was still playing football, but was experiencing a sensation of numbness in his left foot, which made it difficult to put his shoe on.  This numbness then spread to his leg and his left-hand side, causing him to collapse.

He went to hospital and within one day he was diagnosed.  A week later he was operated on and a biopsy was performed.  We were stunned to find that the tumour was grace IV and that it was incurable.  We could not believe it.  Mike was a very positive person and refused to accept that he was going to die.
He underwent radiotherapy, but within two weeks of starting this he was very ill with a blood clot or possibly an infection in his heart.  Mike was in hospital in Swansea (60 miles from our home) for two months.  Chemotherapy then followed.

2008 was quite a good year for Mike health-wise until October when I noticed he was starting to drag his leg again.  This time he had a different type of chemotherapy, but his mobility got worse and worse.  He also started experiencing fits on a fairly regular basis and nothing felt normal anymore.  Often it could happen in a public place, like on a train.

On holiday in August 2009 in the Isle of Wight, Mike had a major seizure and very quickly deteriorated after that.   One day he would have physio on his hand and be able to do the exercises and the next day he couldn’t.  One day he could talk and then the next day he lost his speech entirely, which was terribly frustrating for him and for all his family – we tried different types of communication - there were so many things still to discuss…

Over a few short days he lost the ability to do anything at all and was just sleeping, until he didn’t wake up anymore and died very peacefully at home in November 2009.    The first thing I felt was relief when he died - that this thing had been lifted from us and him.  Seeing Mike like this was really awful for all of us. I felt it was so degrading for him to go from being such an active person and a successful business man to becoming so helpless.

We hadn’t planned his funeral because he had maintained a positive stance that he wasn’t going to die… or perhaps he didn’t want to upset me.
1,000 people came to his funeral – a testament to the man he once was.  As Mike and our son Ben were very big Tottenham Hotspurs supporters, everyone at the funeral wore Tottenham shirts and we had people hold up footballs in church and make an arch for the coffin to go under.  There was a big party afterwards – a big send-off – and Ben, who is a musician, organised for his band to play.

After Mike died I initially went through a phase of being in total shock, then a terrible period of utter sadness and now I feel so lonely, realising he is not coming back.

I have to console myself with the fact that Mike did achieve two goals: he made it to both our children’s graduations and he built a lovely big new house in 2008 for us in which I now live with Ben and Jessie, but without Mike.  I look out of the window and across the road I can see our old house where we all lived together for 23 years as one happy and very close family.

The new house doesn’t have many happy memories because he was ill here and died here.  When he was well he was always making jokes and making us laugh.  Mike was central to the happiness of our family and even when he was ill he never complained, even when he couldn’t play football anymore.

When Mike was ill I had a focus, but now he’s gone I have to cope with everything.  We were together for 33 years and luckily I have our two grown up children who still live at home, but something happened on one day and nothing will ever be the same again.  We never planned for this (for one of us dying so relatively young) – we always planned for what we would do together when we were old. 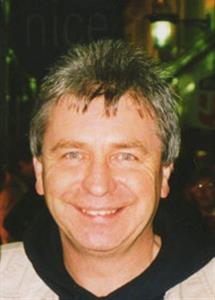