We are grateful to Mike who worked with us in January 2017 to share his story here. Sadly, he passed away in December 2018. We remember Mike as we continue our work to raise awareness of this devastating disease and to fund research to help find a cure. He will be forever in our hearts.

Mike, a retired company director and keen fisherman, started to behave strangely and his wife suspected he might have Alzheimer’s. When they pushed the GP for a scan, they were shocked to find that Mike, then 62, actually had a grade 4 glioblastoma multiforme (GBM4).

“I like to think that the fact that the tumour hasn’t grown is a lot down to my positive attitude. I also take a raft of non-prescription supplements which are said to be effective for brain tumours, including essiac capsules (a blend of herbs and natural ingredients), hemp oil, frankincense, turmeric and lemongrass. I don’t want to stop taking any of them in case I stop taking the one which is really doing me good!”

In October 2016, I was on my own in Cornwall, doing some diving while staying in our motorhome. For a couple of days I didn’t feel 100% and had a bit of a headache but then I rallied and spent a third week diving. My wife Tina flew down from our home in Middlesbrough to Newquay and noticed I wasn’t quite myself.

In December, Tina’s daughter, Gemma, came up from London ready to celebrate Christmas. I don’t remember much, but I know that a couple of days before she arrived, I emptied the dishwasher and couldn’t remember where things went. When Gemma heard about this she thought it was really odd, and, combined with Tina’s observations on my strange behaviour, recommended I saw the GP. I had an appointment with a locum who thought I had a virus, but Tina wasn’t satisfied with this. She felt there was definitely something wrong with my head and suspected I might have Alzheimer’s. She pushed for me to have a scan.

In early January 2017, I was given the results almost immediately after having a scan – It wasn’t Alzheimer’s at all. I needed surgery to debulk a brain tumour, which we were told was a grade 4 glioblastoma multiforme (GBM4). It was a huge shock. My daughter-in-law, who worked in the same hospital had come with us to the appointment to take notes. The neurosurgeon, Mr Varma, informed us of the implications; that patients are lost at all stages of treatment; on the operating table, during radiotherapy, during chemotherapy, but that some are still with us even five or six years later. We were, of course, shocked by this, but heard the last bit and decided to focus on the positive.

I also did a lot of research myself, helped by the fact that I had worked in clinical trials at one point and also because my father was a GP.

Prior to the craniotomy on 23rd January, I was put on a course of steroids to reduce the pressure in my head. Once the pressure had been relieved, it was amazing how my memory went straight back to normal.

I was discharged from James Cook Hospital the day after surgery, having been led to expect I would be kept in for a week. In the event, I was so well that one of the nurses didn’t realise that I had already had the operation! The surgeon was very pleased that he had managed to remove around 90% of the tumour – he had told me that 50% would have been a good result.

For a couple of weeks after the operation my brain felt like there was porridge slopping around inside my head.

I had a scan after a month and was then handed over to an oncologist who, before even introducing herself, said: “You realise you’re not going to recover from this?! It is a death sentence.” Her lack of bedside manner didn’t upset me, but, certain this wouldn’t be helpful for a lot of people, I challenged her. I was never going to sit back and take it.

The oncologist then explained I would be put onto the six-week gold-standard treatment of chemotherapy in conjunction with radiotherapy, to be followed by a double-dose of chemotherapy one week in every month. I agreed to the six-week treatment, but told her I would like to see what the scan revealed at the end of this period before going ahead with the double-dose chemo. She was a bit shocked at my stand.

I had been told that six-week gold-standard treatment of chemotherapy and radiotherapy would make me feel pretty bad. In fact it felt like I aged about 40 years overnight. The treatment seemed to weaken my muscles so much that I found it almost impossible to stand up, let alone climb the stairs.

Tina was amazing. She looked after me fantastically and was relieved that I didn’t have Alzheimer’s as she had originally suspected.

In the end, I did take the first week of double-dose chemotherapy, because I was given to believe that this would help me recover more. In fact, it absolutely floored me. I felt even worse! I had read articles in the press and listened to interviews on the radio which indicated that this oncology treatment killed more people than the disease itself. I asked my oncologist what clinical trial the gold-standard treatment was based on, thinking she would tell me the trial took place in the last couple of years. When she told me that it was as a result of a trial back in 2002 and that there had been nothing done since to improve survival rates, I was completely astounded. I couldn’t believe there had been no further attempts to give patients a better chance of living longer.

Breast cancer has reversed its survival figures over the last few decades so that today 86% survive five years from diagnosis. Why can’t the same thing be true of brain tumours where the figure remains less than 20%? I asked the oncologist whether she was happy with the existing level of deaths to continue, without trying anything else. She didn’t seem to appreciate being spoken to by me in this manner and just told me: “Let’s see how we go with the scans.”

I had an MRI in September 2017, the results of which were delayed for three weeks. It was a horrible wait worrying what they might be. It’s not just how it affects patients, but also the effect on relatives – my wife was beside herself.

We were finally given the feedback just before I went away on a fishing trip to Norway. The tumour hadn’t grown at all. It was completely static. The oncologist said it was a fantastic result and one she didn’t think she had ever seen before. I felt vindicated for not pursuing the double-dose chemo treatment.

My Macmillan nurse told me: “Whatever you are doing, carry on doing it!”

I like to think that the fact that the tumour hasn’t grown is a lot down to my positive attitude. I also take a raft of non-prescription supplements which are said to be effective for brain tumours, including essiac capsules (a blend of herbs and natural ingredients), hemp oil, frankincense, turmeric and lemongrass. I don’t want to stop taking any of them in case I stop taking the one which is really doing me good.

I also take apixaban to keep a DVT in my leg under control.

It was great to get away on my fishing holiday in Norway – I had reserved my place, but had a back-up person just in case I wasn’t able to go. My oncologist wasn’t very happy with me flying, but my best friend promised he would look after me, which he did.

I thoroughly enjoyed the holiday, even if it was quite strenuous and I had to have plenty of rest in between fishing trips. I have also managed to restock the freezer with the fish I caught!

I intend to spend the winter getting fit by exercising every day. I want to get rid of the DVT which makes my feet quite swollen, so I am going to the gym where I exercise on the cycle machine and run on the treadmill. As I get cold very easily, I like to go in the sauna and the steam room while I am there too.

I had another scan recently but won’t get the results until next month. I hope to find that the tumour is continuing to shrink. I am not prepared to go down without a fight so I am dedicated to do all I can to defy my prognosis.

Having met Mel Hennessy, a longstanding supporter of Brain Tumour Research, who set up a local fundraising group known as M.I.N.E. (Money is Needed Everyday), I worked with her to organise a successful spearfishing event on Redcar Beach in August 2017 which raised several hundred pounds vital research into this disease.

Brain tumours are indiscriminate; they can affect anyone at any age. What’s more, they kill more children and adults under the age of 40 than any other cancer... yet just 1% of the national spend on cancer research has been allocated to this devastating disease. At the current rate of spend it could take 100 years to find a cure.

If you have been inspired by Mike’s story, you may like to donate to this fundraising page: www.justgiving.com/fundraising/moneyisneededeveryday 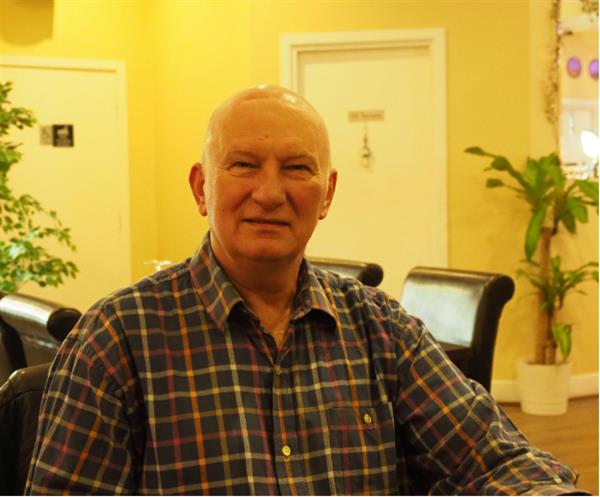