Former senior policeman, Malcolm Hill, was making the most of his first grandchildren (Matilda and James) and hobbies during retirement when he began to notice recurring pins and needles and a strange taste in his mouth. After Malcolm’s brain tumour diagnosis in 2013, his family continued to think positively after the initial shock. However, seizures affected his speech until he was barely able to communicate and Malcolm died, with his family around him, in July 2016.

“Dad had been getting pins and needles down one side of his body and experiencing a very strange taste in his mouth. He described the taste as being like the smell of “burnt bodies” and, being a policeman who had seen and smelt all sorts, that was a particularly striking description!”

Here is Malcolm’s story, as told by his daughter Nicola…

Looking back, it feels like my wedding to Chris in January 2013 was the last time we were all truly happy as a family. My dad, Malcolm, spent the morning writing his father-of-the-bride speech with the aid of seven coffees, so when he got a terrible headache two days later, we put it down to the caffeine and over excitement. Whilst we were away on a short honeymoon, my mother, Jean noticed that he was acting a bit out-of-character, being quite tearful and generally not himself. It did not seem like anything serious and my parents took care of our daughter, Matilda, as planned while we were in Florence.

It was only months later, in July, when my dad and mum, admitted that the odd symptoms had persisted. Dad had been getting pins and needles down one side of his body and experiencing a very strange taste in his mouth. He described the taste as being like the smell of “burnt bodies” and, being a policeman who had seen and smelt all sorts, that was a particularly striking description!

Dad and I were very similar.  I inherited a lot of his personality traits and we both followed successful careers in criminal justice with him rising to the ranks of Chief Superintendent and me a partner in a law firm. We were a close family with my younger sister, Louise, and I growing up in Sunbury-on-Thames. I think of Dad as my original best friend, he would always try to help me solve my problems as a child and I could count on his solid advice as an adult. It is the thing I miss most now.

Like me, Dad was always quite assertive and confident. Born in rural Elmley Lovett in Worcestershire, he did well at school and secured a place at the Royal Grammar School Worcester. Dad knew what he wanted to do and joined the Metropolitan Police Cadets in London when he was 17, rising quickly through the ranks and serving in stations across the capital including at Scotland Yard and in the West End.

When he retired aged 50, Dad still had a huge amount of energy which he then poured into his hobbies. Dad had always been pretty fit, playing rugby and squash, now he took up ballroom dancing with Mum, alongside swimming and lawn bowls. He was so busy, particularly with gardening which he really loved. As well as having his allotment, growing fruit and making his own jam, he volunteered every week at the Royal Horticultural Society's garden at Wisley. Dad got more and more involved with the RHS, eventually becoming a judge at the Chelsea Flower Show. He also organised a local annual event, Sunbury Open Gardens, for charity.

It was at Sunbury Open Gardens, in June 2013, that Dad told me how he had not been feeling well for a while and had seen the doctor a few times. The GP seemed to think it was a vitamin D deficiency but Dad knew it was more than that and, finally, the GP referred him for a scan through his private health insurance. None of us had any idea about how serious it would eventually turn out to be, but we were worried and I remember calling my sister when his results were due a few days later, after failing to get through on my parents’ number.

Louise was calm and reassuring about it, telling me the news that Dad had a brain tumour. We were all relieved to understand what it was and thought he would begin to feel much better, once he had started on some medication to relieve the symptoms.  The only people I had heard about with brain tumours, back then were Russell Watson and Sue Perkins and they had continued to live well. We took a positive view that it would be the same for Dad too.

Although there were some inevitable changes, my parents carried on as normal as much as possible. Dad had to stop driving and started to reduce his busy schedule a bit, like volunteering at Wisley. He made his peace with his illness early on, saying that he had had a great life, a wonderful family and a fulfilling career: “if my time is now, I have had a very full and enjoyable life”. We were keen that he did not give up too much too soon, and he certainly had a strong desire to keep living his life. He fought all the way.

Physically, he changed a lot. Dad lost a lot of weight in the first year and started complaining about terrible itchy skin that was driving him mad. It was shocking to see how ill he looked. By the end though things started rapidly going in the other direction so that he was constantly out-growing his clothes, ending up with a pile of jeans in various sizes that he could no longer fit into.

The tumour was starting to grow again in 2014, meaning Dad needed two operations within a few months to try to slow it down again (one on his 66th birthday). In September came the devastating news we all feared; his tumour was a glioblastoma multiforme (GBM), highly aggressive with an average life expectancy of just 15 months. Yet he was still feeling positive, especially when another grandchild, Emily, arrived at the end of the year. During autumn 2014, Dad had six weeks of daily radiotherapy for one minute each day. This did not work.

His condition worsened during 2015, beginning in February with his first major seizure.  He was resuscitated by paramedics, required intensive care treatment and a hospital stay.  His speech was badly affected. Dad was discharged without any change in medication and only two weeks later, he suffered another major seizure which damaged his speech even further. Although his speech returned a little as he recovered, each seizure left its mark as his ability to communicate became weaker and weaker.

At Easter, Dad began chemotherapy but had only two courses before it was stopped as his blood count became dangerously low.  He was then very lucky to begin a course of Avastin which continued until he died. Another seizure in October left his speech and communication permanently impaired so that my intelligent and articulate father became trapped inside himself.

I was amazed at how he still seemed to take it all in his stride, even though things were looking so bleak. It was hard for him to get us to understand what he wanted or was feeling, but the only thing that clearly worried him was Mum and how she would cope. They had been together for so long. Understandably given his prognosis, Mum did not want to leave his side and took much of the caring responsibility on her shoulders, although Louise and I helped wherever we could and some of my parents’ wonderful friends stepped in too.

Dad was having more frequent seizures by 2016 and Mum was desperate to try to identify his triggers and avoid them – even Countryfile was banned at one point after he twice had a seizure during the programme! He was very wobbly although he was still keeping as active as he could. I remember him struggling to push my daughter Matilda on a swing on Fathers’ Day 2016.

In July 2016 he fell into a flower bed in his beloved garden and Mum could not pick him up on her own. The treatment had left him very overweight by this point. Fortunately, some family friends with medical backgrounds lived nearby and were able to help her. They were very concerned when the hospital rapidly discharged him after checking him over. Dad had a lot of pain in his ribs and his stomach was becoming harder and harder, so they called another ambulance and he went straight back in to hospital.

This time, it was clear that he was not going to come home again. Our family camped out at the hospital, taking it in turns to either sit with him or try to rest on a roll-out mat - the worst kind of camping holiday! Mum, Louise and I knew he could hear us so we were upbeat and positive and chatted to him frequently despite the situation. Dad was kept comfortable and, eventually, passed away quietly with the three of us with him on 9 July 2016.

Later, at the ceremony to celebrate his life, we were all touched to see how many people came to remember him. Dad has left a big hole in our lives, particularly as the last three years had been so dominated by illness and worry. We all try to keep his memory alive but I know that his grandchildren cannot really remember what he was like before the brain tumour made him so poorly.

Losing Dad like that puts things in perspective. It is a cliché but I know that life is short and you have to be kind to yourself and focus on what is really important. I have wanted to run the London Marathon since moving to Deptford/Greenwich in 2003 and cheering the runners on at the side of the road.  I have applied several times through the ballot without success. When Dad died, it focused my mind and I knew I had to do it… my first and only marathon! It is especially poignant this year as it will be Dad’s 70th birthday three days before the event and I am delighted to be wearing a bright pink charity running vest - Dad’s favourite colour.

Dad used to be there with us, watching the runners go by, and I know he will be watching me too. I’ll be running with my husband Chris who lost his dad around the same time, so it is sure to be emotional. Although it is comforting, knowing that Dad saw his children settle down and was able to meet all of his grandchildren, we miss him every day, at every birthday and Christmas, at every milestone, and I know we will miss him cheering us on, on marathon day.

If you have been inspired by Malcolm’s story, you may like to make a donation via www.justgiving.com/fundraising/nicola-hill33 or leave a gift in your will via www.braintumourresearch.org/legacy 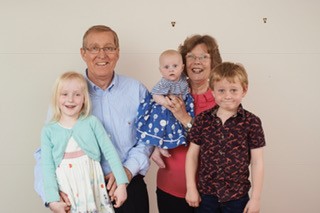