“One of life’s good guys”. Mac Fairrington, was diagnosed with an anaplastic astrocytoma in 2014 after complaining about headaches and a strange smell. He underwent nearly two years of treatment, losing his vision, mobility and independence, but not his spirit nor determination to survive. Mac died aged 67, leaving behind his wife Kath, five children and five grandchildren.

“People talk about peaceful deaths, but he did not go quietly. He fought till that last breath. He never wanted to leave my Mam. They were the love of each other’s lives.”
Here is Malcolm’s story, as told by his daughter Jane Witherspoon…

Everybody called him Mac. He was one of life’s good guys, always playing jokes and up for the “craic”. We were brought up, three girls and two boys, around Birtley and Washington in the North East. Our house was like Piccadilly Circus, with people in and out and always something going on. It was a really happy house.

Our dad was very creative, always making something, from paintings to metalwork or woodwork. Everyone we knew had one of his paintings in their house and we used to joke that our house was “the house that Mac built”. He was an electrician by trade, working for BT for years as a manager - working with “The Boys”.

He was so proud of all of us. As my TV presenting career took off, he and my mam would tag along to the shows. They would get really excited about going behind-the scenes. Often, I would lose them, only to discover them in the green room chatting away to all the celebs. You could take ‘Mac’ anywhere. He liked hearing other people’s stories.

Two years ago, in 2014, it all started with a smell. “There’s an awful smell,” he would say.  “Can you smell that?” He had always had headaches, and he was complaining about a strange sense of déjà vu, but the smell thing must have concerned the GP as he referred our dad to the hospital.  Diagnosed in June 2014 with what they thought was a low-grade brain tumour, a biopsy the following month showed that it was an anaplastic astrocytoma, grade three, in his left temporal lobe.

Things happened quickly. He was accepted onto a chemotherapy and radiotherapy trial as part of the Sir Bobby Robson Cancer Trials Research Centre, at the Royal Victoria Infirmary in Newcastle-upon-Tyne. That course of treatment finished in October 2014 but his MRI the following February revealed that the tumour had grown.

By September 2015, the doctors were recommending surgery. They tried to remove his tumour, but its position meant that they couldn’t get it all, so it was back to another course of chemo. This time he felt so ill, he had to stop after two rounds. Looking back, I think that maybe he knew, deep down, what was happening to him. I wonder if he was trying to prepare my Mam and us for his death, without letting any of us know.

I got married in October. He managed to come to the wedding, but he wasn’t well and my brother Andrew gave me away. He was a big bloke before, he had lost loads of weight during his illness, but the steroids bloated him up so much in the wedding pictures. I had been spending a lot of time going up North to see him and then back again to work in London. My job is very upbeat and smiley, so it wasn’t easy to put that front on. Going through something like this changes your perspective. Nothing is as serious anymore.

I spent a year crying in the car. One day, I was driving back down to London when my sister called with an update. I was near York, and pulled into a farmer’s field to answer the phone. I was sobbing, asking if I should turn around and go back? I remember the farmer driving past in his tractor. He took one look at the state I was in and kept on going! I still have no idea where I was. That’s the thing. It was a blur and all consuming.

My mam had been coping with it all on her own at home when a district nurse suggested we moved him into a hospice for a bit, just to give her some respite. It was hard to get her to agree, we were probably all in denial about what was happening. I always thought we would find a cure for him. I think he thought I’d find one for him too. I’m the practical one, asking the questions that no one else did - like how long he had left. Constantly googling, emailing specialists, researching trials... searching for that glimmer of hope. Never giving up. He never gave up.

When I came across the charity Brain Tumour Research, I was shocked to discover that brain tumours kill more children and adults under the age of 40 than any other cancer. I couldn’t understand why certain treatments seemed to be available in London, but not the North East. I even got in touch with our local MP back home, Sharon Hodgson, to see if she could help. She took his story to the Houses of Parliament.

Our dad was a fighter, even as he lost his sight and mobility on his right side. He was right-handed so that meant he couldn’t write or draw anymore, which was awful for a creative person like him. Brain tumours take away your modesty and ability to do things for yourself. They take away “you”. Anyone who met him knew he was a proud man, but now he was regressing to childhood. He was even swearing and he never swore in his life… well, not in front of us, maybe the BT ‘Boys’ knew different!

He didn’t want to leave my Mam. That was probably the worst thing for him. He knew that my brothers and sisters and me would be fine, but he hated the idea of her being alone. Even as he started losing his speech, he would still shout out “next!” meaning what treatment are we trying next. He didn’t want to give up. Christmas 2015 was spent in bed at home. He was acting out-of-character, getting obsessive about everyone else’s health and being scared to go to sleep. He would even barricade himself in the bedroom and then shout “that’s it, take me now!”

Things went quickly downhill in the New Year. No one really knows how to cope, we all tried to manage with different mechanisms. Mam was resilient but it was a horrible time. Our dad went into St Cuthbert’s Hospice, in Durham, for his last days. My mam had spent the last full night with him. Just the two of them.

On the final night, 30th April 2016, my sisters Joanne, Emma and I went to the hospice to join them. I had declared that I was bringing in wine. I was always told: “you’re not a good drunk!” We poured our first glass at around 8pm and he died. I’m sure he was thinking: “you lot have got to be kidding if you think I’m going to struggle on here and watch you get drunk.”

The room was silent and we could hear his breathing change. People talk about peaceful deaths, but he didn’t go quietly. He fought. He never wanted to leave my Mam. They were the love of each other’s lives. 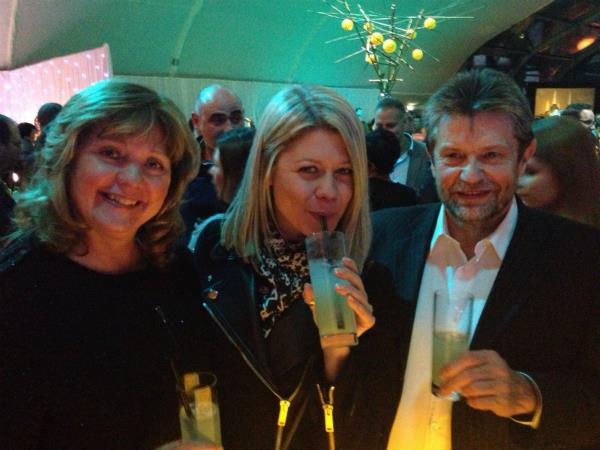