Maggie was a woman who loved life, her job and her family and friends.  She had always lived life to the full until she was diagnosed with a glioblastoma multiforme.   She and her family then felt like they had stepped onto a roller coaster, yet they were determined to make the most of the time Maggie had left.

“Mum’s brain tumour was a big, big shock, which we never saw coming.  Nobody close to me has had cancer, so it was a big learning curve.  We are a very close, small family and I was very close to my Mum.  It was so devastating for my brother, aunt and I and so disappointing that there were no options for her.  Breast cancer research gets lots of funding and there are lots of treatments.  Why can’t the same be true of brain tumours?  I can’t believe that there are no effective treatments, let alone a cure.”
Until mid-year 2010, my mother was an independent woman who loved life and her job.  Mum travelled the world as a clinical training manager to places like Australia, Cyprus, Egypt, China and Singapore.  She lived in a village in Oxfordshire and had a very busy social life.

At the end of June 2010, my mother started to be a bit disorientated and confused and was generally just not coping well.  The doctors thought she was having a bit of a breakdown, but the family didn’t believe this.

A couple of weeks later, Mum started to complain of headaches and it was felt that she must be coming down with something.  When the headaches became very severe we took her to hospital.  Again they said it was a breakdown.  The next day she went to our local hospital in an ambulance.  By this stage, when questioned, she was giving very confusing answers.  A brain scan revealed a huge brain tumour.  We were told that it was very aggressive and that she had weeks, if not a few months, to live.  On top of this the doctors weren’t recommending any treatment.

We were obviously all completely devastated and Mum was in floods of tears.  Her short-term memory had gone completely.  On top of all this, I was due to be married in three weeks’ time.  It became Mum’s goal – she just wanted so much to be at my wedding.

Then a specialist team from the John Radcliffe Hospital, Oxford, came to our local hospital to see Mum.  She was in severe pain and on a morphine drip, but was transferred to the John Radcliffe.  We were then given a ray of hope - the neurosurgeon said he could operate to debulk the tumour and also perform a biopsy.

Just days before I was married we had the results of the biopsy – Mum had a stage IV glioblastoma.  It hit us very hard.  She immediately came to live with me and came under the care of Charing Cross Hospital in London who told us that we shouldn’t have been given a prognosis.

My wedding day arrived and we had a fantastic day, made particularly special because Mum achieved her goal of being there.

Mum then began a course of radiotherapy and chemo, but it was made clear that the treatment would only prolong her life, not cure the tumour.

A follow-up scan at the end of the six week course revealed that the radio and chemo hadn’t achieved anything.  As, you can imagine, this was another big blow.

Mum’s next goal was to live to see Christmas, but, not long before the big day in December, she succumbed to a chest infection and was back in hospital.  Fortunately she was discharged on Christmas Day.  Another goal achieved.

Our outlook was to make the most of any time we still had with her and we couldn’t help but be joyful and positive with my little son Luca, Mum’s only grandchild, around.  He is such a delight, so full of life and energy, yet so innocent, not understanding what was going on with his grandmother.

In January 2011 Mum seemed to be doing so well, and yet a scan at that time didn’t reveal any improvement.  Over the spring-time she was not too bad.  Another scan showed progression of the tumour and it was suggested that she might have more chemo because at the time she seemed to be quite well, all things considered.

Unfortunately, by the time Mum began the treatment, her condition had again deteriorated and she was only able to have the chemo for a few days before it was decided we should pull it.  Mum became increasingly worse.

We did try Avastin after the chemo treatment was stopped – it was offered to us, but we had to fund it ourselves, but, although she had no side effects, after three doses, it hadn’t worked.  Mum was also progressively deteriorating.

From September, I realised I needed more help at home – we were quite resolved all the way through that we would try and keep Mum at home - but she was now very unwell and couldn’t get out of bed properly unaided and was very wobbly on her feet.  She was falling over going to the toilet and her sight was going.  Her brain was being taken over by the cancer.

We had considered the idea of a week’s respite care so that I could have a break, but during the first week of October, Mum had a very, very bad turn and we couldn’t wake her up properly.  The district nurse told us that this was a bad sign and that she might only have hours or a few days left.  We decided that, if Mum was not going to live much longer, we wouldn’t put her into respite care.

After a couple of days, against all expectations, Mum seemed to perk up, although she remained bed-bound.  We had a day carer and a night carer, as well as additional carers who came in to change her and district nurses administering morphine intravenously – so a lot of people coming and going every day.

At this point, Mum was very chatty in bed, sometimes talking normally, sometimes making little sense (because of the brain tumour and the morphine).  Later she became blind and lost the hearing in one ear and became unable to swallow food and, at the very end, even water.  Her body was shutting down and it was terribly hard to watch.

Throughout this, Mum’s pain was incredibly well-managed and she didn’t seem to suffer with the pain.

By now it was into the second week of November and, on Friday, we couldn’t rouse Mum again, although she could hear us.  The following day she went into a deep, deep sleep and stopped communicating.  Her arms and legs were still and I noticed the colour going in them.  On Sunday, she died.  It was very peaceful and calm.  My brother, my aunt, my Dad (they were no longer married but had remained great friends), Mum’s best friend, Nicky and I (all Mum’s close family) were there.  It was the 13th November at 10.30pm and Mum was 57 – a very young 57.  The GP called and Mum was taken.

A week later, we had Mum’s funeral.  She had planned it and chosen the music, including Dancing Queen by Abba which was played as Mum came out of the church.

My brother gave the eulogy and I read my poem to Mum: “We will always remember you”.  The church was full of Mum’s friends and work colleagues from near and far.  She was then cremated.  We had the wake afterwards at my house where Mum had lived since she became ill, with lots of champagne at Mum’s request.

As she requested, Mum’s brain was donated to the Charing Cross Hospital for research, along with stem cells in her neck.

I have her ashes still in her room, but when the time is right she asked that we sprinkle them on Golden Cap in Dorset, which was a place she loved.

Even before she was sick, Mum was so much a part of my life.  I miss her terribly.
Mum’s brain tumour was a big, big shock, which we never saw coming.  Nobody close to me has had cancer, so it was a big learning curve.  We are a very close, small family and I was very close to my Mum.  It was so devastating for my brother, aunt and I and so disappointing that there were no options for her.  Breast cancer research gets lots of funding and there are lots of treatments.  Why can’t the same be true of brain tumours?

I can’t believe that there are no effective treatments, let alone a cure.   It is terrible that in this day and age, her outcome was inevitably death and not only that, but her prognosis was so short.  She only survived for 17 months from diagnosis and during that time, although we made the most of her life with lots of fun, love and laughter, the quality of her life was very poor.

Before she died, Mum set up the Maggie Harvey Trust, a fundraising group for Brain Tumour Research, to fund research into this dreadful disease. 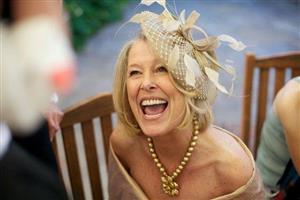