Lynn worked as a teaching assistant at Epsom & Ewell High School for many years.  She and her daughter, Jade, were very close and used to get together two or three times a week, often to go out for dinner or to the cinema.  In 2012 she was diagnosed with an aggressive brain tumour after displaying changes in personality.  She survived nearly four years after diagnosis, but developed a form of leukaemia, probably as a result of her chemotherapy, which killed her in June 2016.  She was 56.

“The day of the craniotomy coincided with her Mum’s funeral so she obviously missed it.  It was very hard leaving Mum in the hospital to go to Nan’s funeral and very difficult not being able to tell my Granddad the real reason why Mum wasn’t there either.  We told him that Mum was having a routine operation, not that they had found a grade 4 brain tumour.”

Here is Lynn’s story as told by her daughter, Jade…

I can still vividly remember the first time I knew something was wrong with Mum.  It was May 2012 and I was in my final year at university and had come to visit.  Mum, who was then 52, was behaving like she was drunk all the time.  Her Mum had just died and I kept checking to see if she was actually drinking but she wasn’t.  I took her to see the GP who told us she was depressed, but I knew that she wasn’t and that there was more to it.

Then Mum became incontinent, so we took her to St Helier Hospital. Three times she was sent home from the hospital with doctors telling us there was nothing medically wrong with her. On the fourth visit, we refused to take her home until they investigated further and she was eventually sent for a scan.  It was then that we discovered that Mum had a tumour the size of a tennis ball which needed operating on immediately.  We were told that she was very lucky it had been found then as she would have died within five days if it hadn’t been removed.

The day of the craniotomy coincided with her Mum’s funeral so she obviously missed it.  It was very hard leaving Mum in the hospital to go to Nan’s funeral and very difficult not being able to tell my Granddad the real reason why Mum wasn’t there either.  We told him that Mum was having a routine operation, not that they had found a grade 4 brain tumour.

The surgeons couldn’t guarantee that Mum’s personality would be the same post-operation.  In fact it took about two months until she started acting normally again.  Until then, she still often seemed drunk, doing very immature things and acting like a five-year-old a lot of the time.

During the craniotomy the doctors managed to remove 100% of the tumour which was great – they told us that normally they would expect to remove around 80% - but it was hard to hear that the tumour would come back eventually.  The neurological nurse told us the longest time she had known was 10 years, but that most people didn’t make it beyond five years, so we hoped that we would have at least five more years with Mum.

Following surgery, Mum started on chemotherapy every six weeks for six cycles, which she had in the form of a tablet, as well as intravenously.  A couple of cycles had to be delayed because of her white blood cell levels.

She didn’t have radiotherapy because they were saving it for when the tumour grew back.

Mum didn’t return to work.  The chemo made her very ill.  I decided to defer my finals so that I could look after her, helped by my brother, Dale, who I shared a flat with and sister Mahe Gladdon, who, although living in Middlesbrough with her family, regularly came down to visit.

The visits to doctors and hospitals continued.  Following chemo, Mum had an MRI scan every six months to see if the tumour had grown back. Her veins were so damaged from the chemo that every time they took blood they had to find a new place to take it from.  I even saw them take it from her feet!  Otherwise, she was getting on with life, seeing family and friends and even talking about going back to work.

In March 2016, Mum was diagnosed with Myelodysplastic syndrome (MDS), a potential precursor to leukaemia, and started having tests to decide her treatment options.

Throughout March and April of 2016 she started getting worse. Mum was rushed into hospital on three occasions for blood transfusions, probably having about 10 in total.

The doctors came to the conclusion quite quickly that her best option was a bone marrow transplant (the preferred solution as this would completely eliminate the risk of the MDS developing into leukaemia), or, if not, an acute chemotherapy that would control it, but never completely remove the risk.

Mum had to endure the excruciating pain of a bone marrow biopsy to enable doctors to start looking for a suitable donor.  They ruled out me and my siblings as possible donors because the chance of children being a match was almost 0% and they ruled out Mum’s brother because he was over 60.  He was also a cancer survivor himself, having been diagnosed with bowel cancer in 2014, but thankfully by now had been given the all clear.

Nearly all of my friends immediately volunteered to be tested to see if they would be a match, but the doctors said this wouldn’t be necessary as they were extremely positive about finding a match on the current bone marrow register.

They weren't however sure if her body could cope with a bone marrow transplant because it is such an intense procedure and all your organs need to be 100% fit.

Over the next couple of months, Mum started undergoing tests on her organs. An ECG showed her heart was good to go ahead and eventually the only thing we were waiting for was an appointment for tests on her lungs. As a smoker they weren't too hopeful. Whilst waiting for the appointment, however, we received a letter saying a donor had been found.

Everything seemed to be looking up!

On a Sunday in June, I went to see her, just before going on holiday on the Tuesday.  Mum was in such high spirits.  She was excited that I was going away, but also worried because I was going to Ibiza and, having been there herself at my age, knew the dangers and the risks involved!

I returned in the early hours of Sunday and messaged her as I always did when I got back from holidays, letting her know I had landed safely and would see her soon.  She replied saying she was glad I had had a good time and was back safe.

On Monday Mum’s best friend Lorraine (who is also my Godmother) rang me at work, concerned she wasn’t getting any response from Mum to her calls and messages, which was most unlike my Mum.

I went round to Mum’s house with my brother and met Lorraine there.  Mum was yellow in colour, sweating, confused, dehydrated and breathless.  We called an ambulance and she was taken to hospital.  Initial testing showed that the MDS had developed into leukaemia and that there was some form of bleeding on the brain. They were unclear at this stage if this was as a result of another brain tumour or some form of mild trauma.

The next day I went to visit her and by the time the rest of the family had arrived (including Mahe who had driven down from Middlesbrough), the consultant had assessed her.  She broke the news that Mum only had a few days left because the bleed was getting worse, her blood wasn’t clotting (as a result of the leukaemia) and she was not responding to any treatment.  It was a catch 22.  If they treated the bleed it would worsen the leukaemia and would just delay the inevitable.

Mum deteriorated very quickly.  On Tuesday morning, she was talking incoherently, although she knew I was there.  By Wednesday, she just didn’t seem to wake up.  Thursday came and she was struggling to breathe.  It was distressing to watch.

I slept with Mum in hospital on Tuesday night and didn’t leave the hospital until Friday morning when she passed away at about 6 or 7am.  I was awake when she stopped breathing.  I called the nurse and she told me a doctor would need to pronounce her dead, although she confirmed that there was no pulse.

I called my brother, sister and dad to let them know.  None of them answered and it was my dad who was the first to return the call.  He immediately went round to pick up my brother, then called my sister who called my grandad and we all met at the hospital to say goodbye.

We were all in shock when she died on Friday morning.  If we had been told that her brain tumour had come back I think we would have been more prepared.

Her death has left a huge hole in my life.  Mum and I were really close and used to get together two or three times a week, often going out for dinner or to the cinema.

It was only after she died that I discovered how grim the statistics are for patients diagnosed with brain tumours – I had avoided doing any research when she was alive.

I am pleased to be helping through fundraising and raising awareness and have recently completed the Silverstone half marathon, raising over £1,500.  I still hate running! 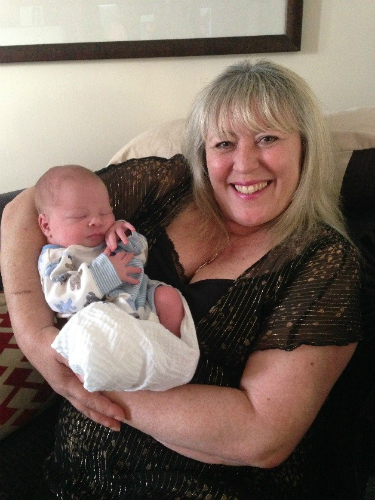