We are grateful to Lizzie who worked with us in October 2020 to share her story here. Sadly, she passed away in August 2021. We remember Lizzie as we continue our work to raise awareness of this devastating disease and to fund research to help find a cure. She will be forever in our hearts.

Since being diagnosed with an aggressive brain tumour in May 2019, mum-of-three Lizzie Parker has transformed her diet and lifestyle in a bid to extend her life and slow the progression of her cancer. Lizzie, a former primary school teacher from the East Riding of Yorkshire, has undergone three brain surgeries, radiotherapy and chemotherapy, combining a ketogenic diet with standardised brain tumour treatment. Now the 39-year-old is also funding her own private treatment, since her NHS options have run out.

I had been suffering from migraines for a few weeks and I’d been back and forth to my GP to try to get to the bottom of what was causing them. I had a busy job as a primary school teacher and three boys at home (then aged 11, 13 and 15), so it was thought the severe headaches were the result of tiredness and stress. I was given migraine relief medication and told it probably wasn’t anything serious.

“Then, one evening I was in bed feeling really unwell and fatigued, when all of a sudden, I got a sharp pain in my head, which shot down my spine.”

The next morning, I felt really weird and noticed I had lost some co-ordination too. I said to my husband Paul that something wasn’t right, so we headed to Hull Royal Infirmary A&E to get checked out. I was put through various assessments and was sent for a CT scan, which revealed a ‘suspicious, sinister mass’ on my right temporal lobe. I was given high-dose anti-inflammation drugs and admitted. Even though they had found something on my brain, I really wasn’t expecting it to be a brain tumour. 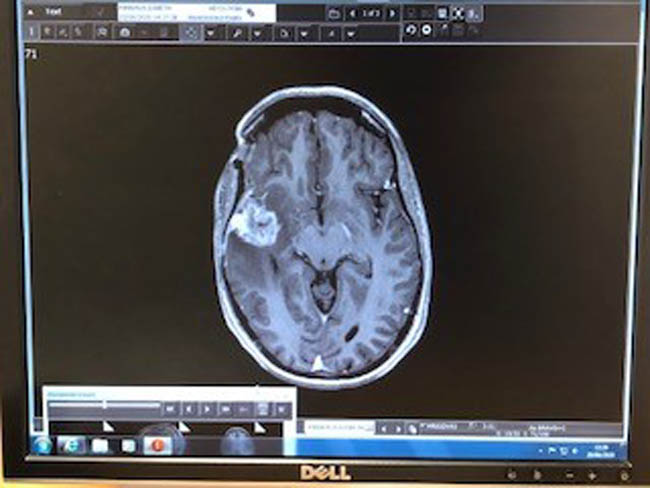 A further MRI scan showed that I did, in fact, have a golf ball-sized tumour. They said it looked like it was a high-grade glioma. I asked about the prognosis and was told the average was six to 14 months. I was in complete shock and so was Paul but somehow, I remained calm and my thoughts immediately turned to our three sons. They were waiting down the corridor in the hospital while we were being given the news. I went to see them and explained that I would have to be operated on. 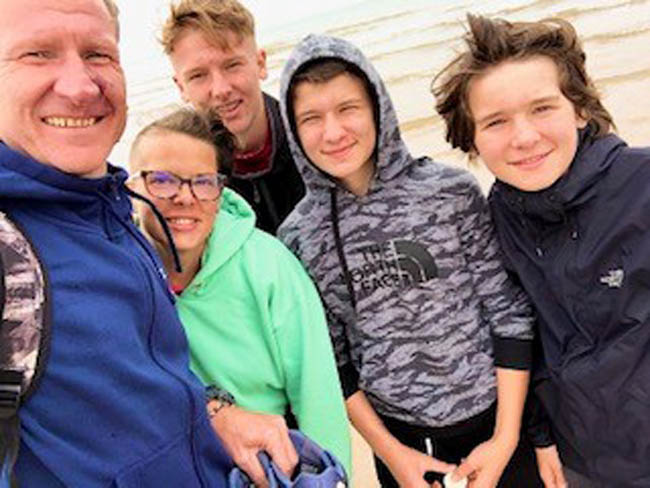 “We didn’t use the word ‘cancer’. I said it was like a ‘weed’ in my head that would need to be removed and then I might need medicine afterwards to try to kill the ‘roots’ and prevent it from growing.”

Within four days I was undergoing brain surgery to remove as much of the tumour as possible. On the day of the operation, I felt calm and positive and was only planning for the best-case scenario. The worst thing was having my loved ones coming to visit the day before; it felt like they were there to say their goodbyes and really didn’t help with my positive-thinking. Still, I thought about my 15th wedding anniversary, which was coming up and I sent Paul a text asking him if he would marry me all over again. Thinking about the possibility of renewing our vows once I had recovered from surgery gave me a goal to focus on. I watched the sun rise over Hull from my hospital window and felt really at peace with everything. 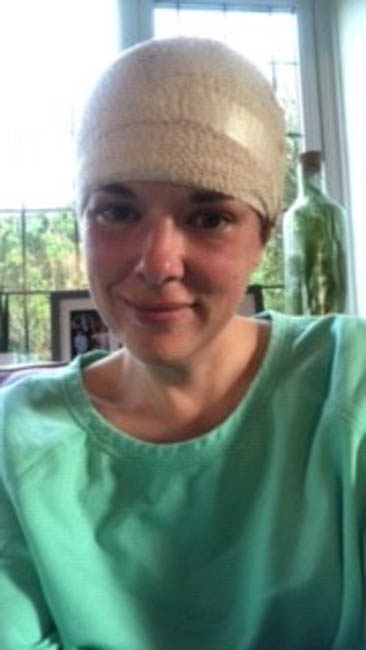 The surgery lasted five hours. I don’t remember waking up but I did regain consciousness very quickly and was able to go home after four days in hospital. A biopsy confirmed that my tumour was a grade 4 glioblastoma multiforme (GBM). Only 25% of glioblastoma patients survive more than one year and just 5% survive for more than five years. Following surgery, I was put on the standard-of-care treatment; a six-week course of daily radiotherapy, alongside Temozolomide (TMZ) chemotherapy. Unfortunately, I reacted really badly to the treatment; it made me very unwell and I ended up having blood transfusions due to my low blood count. 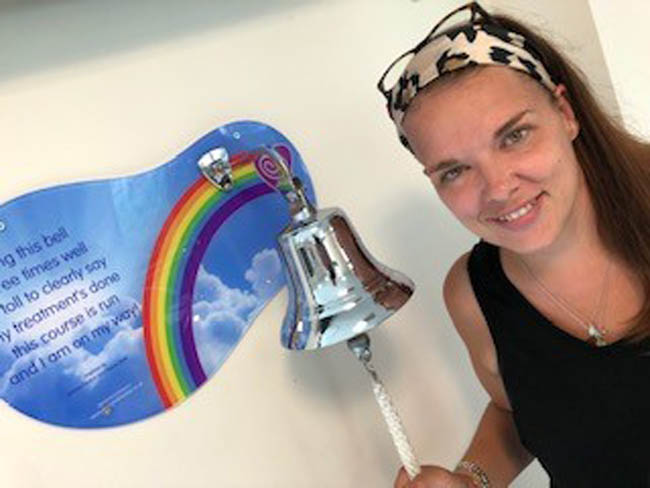 From the moment I was diagnosed with a brain tumour I decided to take matters into my own hands and embarked on restoring my health as best I could. I cut out all rubbish from my diet; no caffeine, no alcohol, no processed food. I had previously been on a low-fat diet, which I thought was healthy, but as I did more and more research, I realised just how toxic my diet and lifestyle used to be. I switched to the ketogenic (keto) diet, which is high in fat, low in carbohydrate and contains zero sugar. The idea was to restore my metabolic health. It’s based on the idea that cancer cells have dysfunctional energy systems that demand vast amounts of glucose, and lack the adaptability to use other fuel sources such as fatty acids or ketones, which are produced when the body starts to use fats as its main source of energy. I quickly became an expert on the subject, devoting my time to reading and researching everything I could on the topic, to arm myself with as much knowledge as possible. 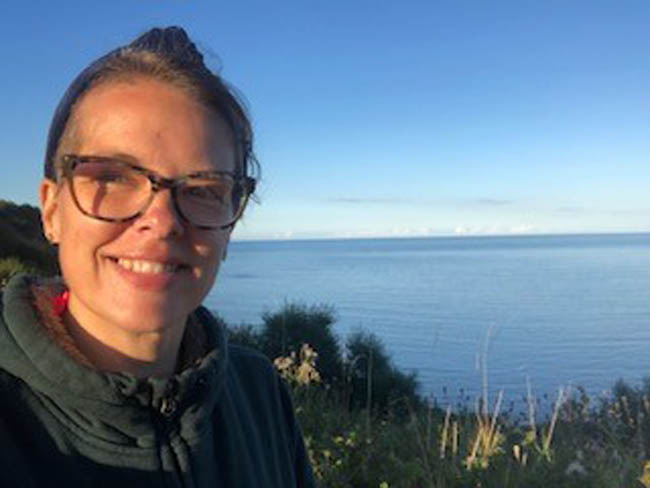 I adapted really well to my new diet and even managed to get my husband and the boys involved too, although they obviously don’t follow it as strictly as me. I have lost four-and-a-half stone and reduced my body mass index (BMI) from 30 to 23. My bloods were quickly restored and I continued to feel well. A hammer blow came in December 2019, however, when a routine MRI scan revealed a new area of growth in my parietal lobe. I was offered surgery on this second area of disease but I refused.  I turned it down because my health was improving and I had no symptoms and was enjoying a good quality of life. It seemed insane to put myself through an operation just before Christmas that I had worked so hard to be here for. My NHS team were fine with the reasons and agreed we would review the next scan, which was at the beginning of January. The scan results showed stability in both sides, so we thought we were on the right track.

Then, on 18 March 2020, as the country was about to go into lockdown due to the outbreak of coronavirus, I suffered a seizure, which triggered an unscheduled MRI scan. The results of that scan showed that, unfortunately, the tumour had changed again and I urgently needed to go in for a second surgery. That operation took place on 6 April. By now, the country was heading towards the peak of the Covid-19 pandemic. I really wasn’t anticipating all of the hospital staff to be in full PPE. As it was early on in the pandemic, the staff hadn’t worked out how to get patients in and out of beds in a Covid-secure way. It was all very strange and I just couldn’t wait to get it over and done with and get home. Luckily, I was discharged the day after my surgery and recovered well. 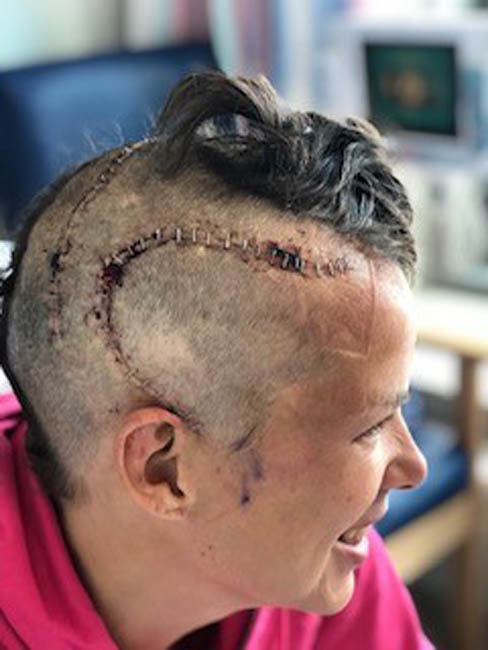 Three months later, in June 2020, I attended an appointment following a routine MRI scan and received the news that there had been more progression in both my temporal and parietal lobes. The upshot was a third brain surgery on 8 July, this time a double resection lasting seven hours. So, I’d had surgery right at the beginning of lockdown and another at the end just as the restrictions were easing – you couldn’t make this stuff up! Once again, I managed to stay calm and positive throughout. My family were also incredible, taking it all in their stride. We’re a team; the five of us taking on each challenge we’ve faced together. 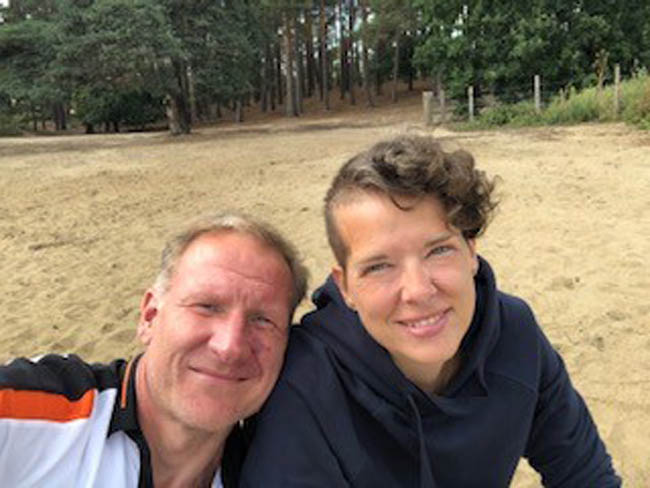 “I never embarked on a ketogenic diet thinking I had found a cure for brain cancer, rather, I hoped it would help me to live a lot longer than the initial six months I had been given.”

It has also got me through three craniotomies in four months. Along the way, I have learnt about amino acids, cellular health, mTOR cancer pathways and cellular respiration, as well as the effects of insulin and glucose-fuelling on the body and repurposed drugs. It has been quite a journey!

I have also learnt about the drastic lack of funding into this area of cancer research. We need more research into why people get brain tumours and how to treat them and improve outcomes. My passion inspired me to get involved with the charity Brain Tumour Research, as they are the only national charity in the UK singularly focused on finding a cure for brain tumours through campaigning for an increase in the national investment into research to £35 million a year. In September, a gang of us from my village Elloughton, near Hull, walked in socially-distanced groups of six as part of Brain Tumour Research’s Walk of Hope campaign. It was lovely to have a community of supporters joining me and my family for the event and we were proud to raise more than £500 for this vital cause. 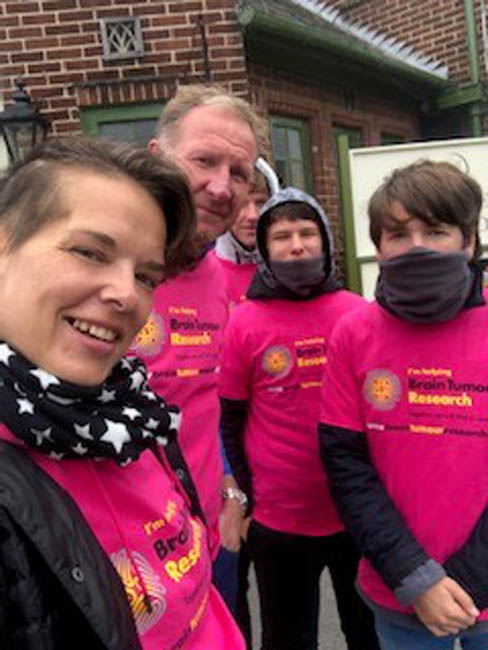 After my diagnosis, if the assessment had been done on the NHS, I would have been assessed as pre-diabetic and hyperinsulinemic. If this had been addressed, they could have treated or advised me differently. Instead, I have researched and self-funded an integrative pathway to correct these markers and extended my life expectancy. Not all brain tumour patients have the means to be able to do this. I strongly believe that advising on metabolism would improve outcomes for many. I am calling for the Government to fund this specific area of brain tumour research so that the NHS can revise current protocols in light of the evidence. I’ve started a petition to fund research into metabolism testing for brain tumour patients, which needs to achieve 100,000 signatures in order for the topic to be debated in Parliament. I’m promoting it widely on social media, including on my blog Game Changer, where I also write posts about the daily life of someone battling an incurable brain tumour.

I am now self-funding treatment via an oncologist from the Imperial College London, with a monoclonal antibody drug, which is not available on the NHS because it has not undergone any trials for cancer patients. There is nothing left in the NHS pathway for me now. The treatment I am on costs £36,000 and is very much experimental but it is showing good promise in other patients so I remain hopeful. If I can succeed on this drug it might inspire other doctors to do trials on these drugs.

“I don't class myself as ill because I do not feel unwell. I have a disease in my body that carries a terminal diagnosis and I am technically receiving palliative care.”

All terminal means is that medically a cure has not been found and you are likely to die from this diagnosis; 17 months later, I’m still here and I’m living a good life. I accept my diagnosis but I truly believe that I can survive against the odds because I am taking matters into my own hands and not accepting what the statistics say. It’s never too late to take charge of your body and I hope I can inspire others to regain control of their, even in the worst possible scenario.

If you have been inspired by Lizzie’s story, you may like to make a donation via or leave a gift in your will via www.braintumourresearch.org/legacy 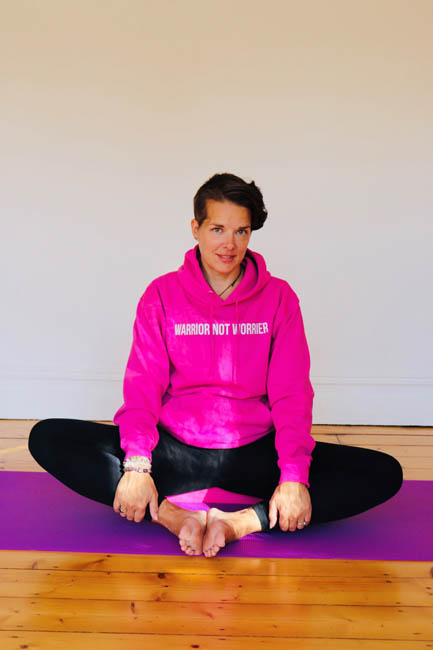