Linda Egginton was a selfless sister, auntie and friend. She worked happily as a teaching assistant and volunteered as a Sunday school teacher and as a scribe for the blind, but sadly a glioblastoma multiforme diagnosis came along to devastate her life and the lives of all who knew her. Just three months after her diagnosis, Linda passed away, aged 59 with still so much to live for.

“Within five days, my auntie had reached the end. She had been unable to talk or communicate and didn’t look anything like the woman I knew and loved. I can’t put into words how devastating it was to lose her and I don’t know if I’ll ever get over it.”

Here is Linda’s story, as told by her niece Bekki…

My auntie Linda was like a second mum to me, and she was the best sister and best friend to my mum, Debbie. People exaggerate when they call someone ‘the nicest person ever’ but Linda genuinely was the nicest person. She would do anything for anyone and I will always cherish the time I had with her. Linda didn’t have any children but her two cats, Jasper and Kai, were her babies.

It was September 2012 when we noticed something wasn’t right. My mum popped round to see her and Linda was really upset and distressed; she was trying to do a lesson plan but she just couldn’t do it. She’d been a teaching assistant for years and would do lesson plans with her eyes closed but now for some reason her brain just wasn’t getting into gear.

Mum suggested booking an appointment at the doctors and my auntie never wanted to go to the doctors so when she immediately said yes, Mum knew something wasn’t right. Alarm bells rang even louder when Linda had a breakdown in a class at school a few days later. This wasn’t like her and Mum was so worried that she went to the GP with her.

In the GP’s room, my auntie wouldn’t answer any questions and just looked to my mum to speak for her. I think this is partly why they thought she was depressed and sent her home with anti-depressants. Within days of taking the medication, however, Mum noticed that Linda was slurring her words and walking slowly with her hands hanging limply; she spoke to the GP and asked if it was the medication and the doctor said he would change the prescription just to check. The new pills made no difference and my auntie was just getting worse and worse. It got to the point where the whole of her left-hand side was limp and Mum called for an ambulance who took her to A&E with a suspected stroke.

Looking back now, Mum remembers chatting to Linda in hospital about their uncle who’d had similar symptoms, but they both laughed it off and said ‘oh no, that was a brain tumour’. However, after seven hours of scans and tests in the hospital, my auntie was given the horrendous news that she herself had a brain tumour. And it was inoperable. After hearing the news, she cried, which was really out of character for her, and looked at my mum for reassurance. My mum was just as terrified though and didn’t have any of the answers Linda was looking for, but she told Linda she would be with her every step of the way.

Linda’s tumour was diagnosed as a grade four glioblastoma multiforme (GBM), and scarily, the consultant thought it had probably been there for nine months. Thinking back to my 21st birthday party in June that year, Auntie Linda hadn’t been her normal self. I remember me and my sister and our cousins commenting that she was more drunk than she would be usually, wondering if she was going to be the ‘drunk auntie’ at family parties from now on.

They transferred Linda from Darlington Memorial Hospital to Bishop Auckland Hospital for physiotherapy to help her use her arms and legs again. Then in November she was offered radiotherapy, which they said wouldn’t make her better but would give her some more time. Linda was quite religious and her faith made her believe that maybe the radiotherapy would actually make her well again. She was being really quiet and I could tell she was scared but she was also putting on a front to try and protect me and my sister Michaela.

Around this time, Mum was worrying that Linda was getting worse but she was frightened to say anything to the consultant in case they cancelled the radiotherapy. Linda had her hopes pinned on radiotherapy and, even if it wasn’t going to help the tumour, she still wanted to go through with it. Eventually though, Mum told the doctor about her concerns and she was gutted to hear the doctor confirm that Linda was getting worse as new scans had shown the tumour had grown.

Thankfully, Linda still had her radiotherapy and it did her a world of good psychologically. One of her treatments was scheduled for Christmas Eve but it had to be delayed because the machine wasn’t working. The trip to hospital wasn’t a waste though as a children’s Christmas choir was singing at the hospital and for the first time in ages, my auntie was smiling.

Christmas that year was a bittersweet time for me. Linda was a huge fan of the royals and never missed the Queen’s Speech so my mum, sister and I all sat and watched it with her. She loved it so much that she’d glare at us if we so much as sneezed. The rest of the family, including my uncles and their kids travelled back to Darlington and joined us on the 27th. Linda was getting overwhelmed and tired of all the visitors at this point which was so unlike her – she was usually such a people person. Yet she still wanted to get all the family together.

One moment I’ll never forget was when she started sharing out all her nice things between me and my cousins. Linda always liked to look nice and had a collection of nice perfumes, shoes, and accessories. She took good care of her skin too with lots of expensive skin products, and she would tell me off if she ever caught me using a face wipe to remove my makeup. So, when she started handing all these things out, it hit me that this would probably be the last Christmas with her. My cousins were all excited to be getting these nice things but I, being the oldest, realised what she was doing. It still makes me upset thinking about it now.

A few weeks later, it was the funeral of one of Linda’s next-door neighbours and Mum had stopped her from going as she was just too unwell. While Mum nipped home for 10 minutes, Linda was so desperate to go that she tried running into her room to get ready and she collapsed. When Mum got back, she thought Linda had gone.

Linda was rushed into hospital and put on a general ward where Mum left her for the night. When we went back the next day, however, my auntie had drastically deteriorated and was now in a room on her own. It was obvious that she didn’t have long left so Mum and my Uncle Gordon pleaded with the hospital to move her over the road to St. Teresa’s Hospice when a bed became available. It was an historic building and Linda would have much preferred to spend her final days there than in the hospital. The hospital insisted it was too dangerous and Linda might not even survive the short journey over the road, but they gave it a go on the 14th January and the risk paid off.

Within five days, my auntie had reached the end. She had been unable to talk or communicate and didn’t look anything like the woman I knew and loved. I can’t put into words how devastating it was to lose her and I don’t know if I’ll ever get over it.

She’d planned her funeral herself and it really was a lovely day – exactly how she would have wanted it. I read The Rose Beyond the Wall by A.L. Frink at the service which was difficult but I’m glad I did it for her. Just a couple of months later, some good news came in the midst of all the sadness: I was pregnant and would be giving birth to a little girl called Chloe, just eight months later. I know Linda would have loved her so much, and having Chloe was like having a part of Linda still with us.

Chloe is four now and just about to start school. I think about Auntie Linda every day and every Christmas, we make sure we watch the Queen’s Speech in silence. I also think twice before reaching for a makeup wipe!

I still can’t believe how cruel this disease is and how many people are suffering because of it which is why I’m determined to raise money for research into brain tumours when I run the Great North Run in September. It’ll be tough but knowing I’m doing it in my auntie’s name will help me reach that finish line.

If you have been inspired by Linda’s story, you may like to make a donation via https://www.justgiving.com/fundraising/bekki-mullett1 leave a gift in your will via www.braintumourresearch.org/legacy 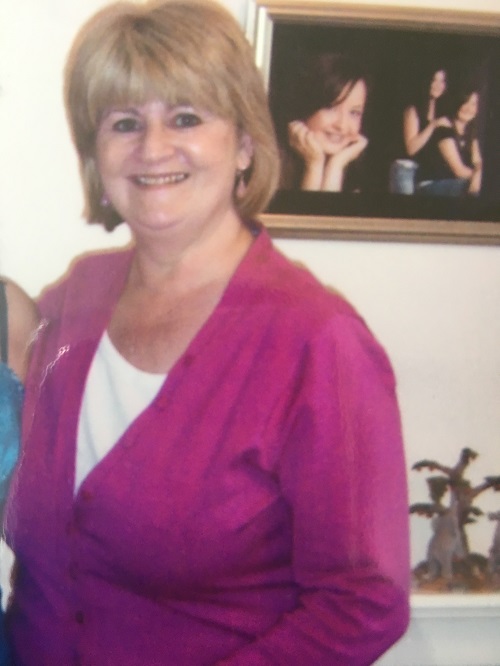