Katrina was eventually diagnosed with an Astrocytoma grade III, having experienced seizures for several years – her consultant had been happy just to monitor her.  Eventually, however, despite a craniotomy and chemotherapy, Katrina succumbed to the tumour and passed away at the age of 43.

“Katrina was such a beautiful person – she was gentle and kind, passionate and determined and was so full of love and compassion.  I am just so grateful and privileged to have shared 24 years with someone so unique, extraordinary and amazing, but I miss her terribly.

Now I want to increase awareness of this terrible disease for which there is no known cure and celebrate Katrina’s life.”
Katrina attended full-time ballet studies at Arts Educational Schools, London and it wasn’t long before she was being awarded prizes for her work and performances.  Her dancing career took her around the theatres of Germany, Austria and Switzerland, performing with the Vienna Festival Ballet in Swan Lake and other ballets.

Along with all types of music and dance, Katrina loved to explore new countries and cities.  Combining travel with her work in Sweden, Italy, France and America, together we had some wonderful times in many parts of the world.

It was towards the end of two years of intensive studies at Arts Educational Schools, London, when Katrina was beginning to audition for professional work, that she met me.   I knew immediately that Katrina was special.  She was so affectionate and loving.  Her natural beauty shone through – she had long, curly brown hair, a gorgeous figure and a wonderful sense of humour.  A friend I worked with at the time used to say that Katrina looked like a young Jane Seymour.  It didn’t take me long before I realised I had met my soul-mate, best friend and partner for life.

We married on 18th October, 1997, but, six years later, when Katrina was 34, she started to experience seizures, or what she described as “funny moments” and a “mass” was revealed.  Her consultant (who shared the same love of classical music, dance and opera as Katrina) was happy just to monitor the situation and encouraged Katrina to get on with her life and her dancing.  He was, however, under pressure from other consultants to operate, which concerned me, particularly as he hadn’t yet performed a biopsy.

At the time the seizures weren’t that frequent and I just trusted what we were told, but five years later when the swelling became more intense and her consultant retired we went to another hospital for a second opinion and saw a younger doctor who insisted we got a surgeon to look at Katrina’s scans.

By this time, Katrina was experiencing more frequent seizures – some happened in Central London.  I really worried for her safety.  I was phoned on a few occasions by different hospitals to come and pick her up, following a seizure.

Nothing could prepare us for the news that Katrina needed a major operation to remove the suspected brain tumour.  I remember that Katrina wouldn’t look at the scans – it was very difficult to face what was happening - but I felt we had to be guided by the doctors.

Katrina was operated on in May 2009.  It was difficult and traumatic, but yet again Katrina was truly amazing, coming through the operation and going back to her dancing within weeks.  She wore beautiful scarves around her head to hide the scars and the bald patch where they had shaved her head.  She was incredibly strong and brave.  I would have been a nervous wreck with what she had to deal with, but Katrina handled it all so well.

Katrina’s health seemed to be back on track, even though she had to take medication every day to prevent seizures.  She carried on with life and things seemed to be going well, but the problem with this type of condition is that it is so unpredictable and within two years Katrina had a relapse.  A weakness in her right arm and leg developed and this was to lead to the final chapter of Katrina’s life.

Within the next couple of months, Katrina began chemotherapy.  It was really scary, but yet again Katrina showed amazing courage and bravery and was determined to live her life, refusing to give this hideous tumour an inch.  Her goal was to be well enough so that she could get back into her ballet classes and this she achieved with her amazing strength of character.

It was only in the last six months of her life, that Katrina was unable to carry on as normal.  She had no choice – her body had taken over.  Her walking became weaker and weaker and she was unable to move her right arm at all.  She had to take various types of drugs, some of which made her hungry all the time and caused her body to swell up.  Others made her feel dizzy, making her walking even more unsteady.

She started to lose her speech and as the tumour progressed Katrina had very limited vocabulary.  Amazingly, however, if we put on one of her favourite cds, like Katie Melua, Katrina could sing along with the words with her beautiful voice.  It was very emotional for me, her mum & dad and sister Fiona, but we just had to carry on, not showing that we were upset.

It would have been very easy to become depressed at this difficult time – but not Katrina.  She was frustrated, but never angry or bitter.  She still maintained her beauty regime of cleansing, moisturising, putting on her make-up and dressing in beautiful dresses when she could - some things she needed help with, but a lot she did herself.

It became an amazing period of time when we could focus all of our love onto Katrina – she was simply adorable, so loving and beautiful.  We could not stop kissing and cuddling her.

We looked after Katrina at home until very nearly the end of her life.  It was what she had wanted… but she had to go into a hospice for the last 36 hours of her precious life, where we held her hand as she gently slipped away from us.

Katrina was such a beautiful person – she was gentle and kind, passionate and determined and was so full of love and compassion.  I am just so grateful and privileged to have shared 24 years with someone so unique, extraordinary and amazing, but I miss her terribly.

Now I want to increase awareness of this terrible disease for which there is no known cure and celebrate Katrina’s life. 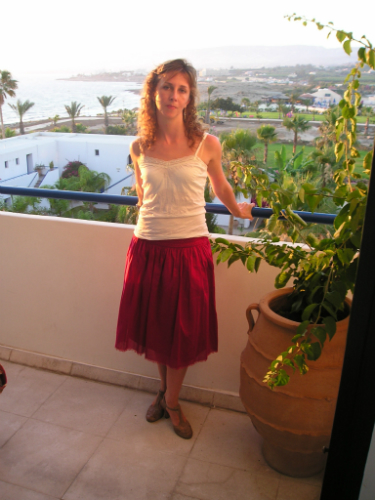