We are grateful to Julie who worked with us in July 2017 to share her story here. Sadly, she passed away in February 2019. We remember Julie as we continue our work to raise awareness of this devastating disease and to fund research to help find a cure. She will be forever in our hearts.

Bristol mum of two, Julie Harvey, is living with a grade four glioblastoma multiforme (GBM), a very aggressive form of brain tumour. Though doctors have given her a 14 month prognosis, she is taking every opportunity to indulge her love of swimming and spend time with her friends and family. Having lost her sister in her 20s to a head injury sustained from a freak horse riding accident, Julie is determined to not waste precious time dwelling on her illness and has set herself the challenge of swimming two miles in open water around Brownsea Island, something she has always wanted to do.

“Telling my friends and family about the brain tumour was awful, especially my mum and dad. Sitting them down to tell them they were going to lose another one of their children was heart-breaking. I want to enjoy my life and don’t want to be remembered for the cancer, but for being me.”

I was working as an Activities Coordinator at the time I started to feel unwell and I just remember the excruciating headaches and the consistent pain. I knew that this wasn’t ‘normal’, as no headache should last two weeks and stop you from doing your job. My mum was the one to say to my GP “this is not a headache” and insist I went to A&E. As my husband John was in Israel on business, my mum took me to the hospital. When I started throwing-up on the way, it only made me more concerned about what could be wrong. At first they implied it was just a headache and why was I wasting their time. Then the doctor saw me and took it more seriously but said it was nothing to worry about but they would do a scan to prove it was nothing.

That evening they came back and said I had a tumour and they would like to operate but that it was in a good place so they hoped to remove all of it and that it had probably been there for years.

John made it home the next day and was with me for the operation which took place two days later and follow up scans. I was high on morphine at the time for the pain so the seriousness of what was happening didn’t hit me, the word tumour made me think “oh well, doesn’t matter” and things were just happening around me very quickly. When I was sent home they still suggested everything should be fine except that I wouldn’t be able to drive for a year.

When I got the call from the hospital to come in and discuss the results, I knew it was bad news (they wanted me to go in the next day). A further MRI scan and tests revealed I had a grade four glioblastoma multiforme (GBM), a very aggressive form of brain tumour.

I have received a lot of bad news in hospitals in my lifetime. My sister Claire died when I was 23, after hitting her head in a freak riding accident and we almost lost my daughter Sophie at six months to meningitis, which left her deaf.

This time my response to the news was shock, being told you have 14 months to live and that only 25% of people live for two years was devastating. Telling my friends and family was awful, especially my mum and dad. Sitting them down to tell them they were going to lose another child was heart-breaking.

After the diagnosis, there were days I couldn’t get out of bed and my mood was very low. The courses of chemotherapy and radiotherapy were both physically and mentally draining, and made me really sick. Though I felt awful I was determined to not let the cancer stop me from getting out and about and enjoying things like swimming, walking and cycling.

I love to swim and being outdoors, whether it’s swimming in a lake, long walks or on a boat with my friends from my local sailing club in Thornbury. Going on long walks with the girls and having the opportunity to catch up, has also always given me so much pleasure. Recently my mum, my aunt Celia, friend Elaine and daughter Sally took on a 26 mile walk around Edinburgh. At mile 17 I was ready to throw in the towel but Elaine and Celia pushed me on through. I’ve known Elaine for over 20 years and she knew singing songs like ‘She will be coming round the mountain’ would keep me moving.

I’ve even got my family active, my husband John has signed up for a triathlon in September, which is so unlike him. We’ve been married for nearly 26 years and I remember him asking me out in the local pub where I worked, and inviting me to play squash. I guess he knew then that I liked to keep active!

I’m really lucky to have a such a great family and a circle of friends who live close by and created a rota to take it in turns to come to my treatments and help where they can. My cousin Richard takes me to my swimming where I meet Cathy who I swim with twice a week, which I really enjoy and gets me out of the house. I’ve also recently taken up a weekly art class with my dad, though I’m not very good, it’s nice to spend time with him.

I have one more week of chemotherapy to go, though asked the hospital put it on hold so I can complete a two-mile open water swim around Brownsea Island. It’s something I have always wanted to do and while I can do it and while the weather is nice I want to give it a go. I really think my sister’s death made me think, “I’ve had 26 more years that she’s had, I’m going to make the most of it."

When I was first diagnosed, I wanted to tell my story and let people know how I was getting on, so set up the blog http://juliebtjourney.blogspot.co.uk/ to record my journey. Discussing everything from my treatments and scans, to the counselling I received. These sessions were really helpful and enabled me to speak openly about my fears and how to talk to my girls about what was happening.

Soon after the diagnosis I decided I wanted to organise a summer ball which took place at the beginning of July. It was really successful and with a lot of hard work we had a great evening with over 120 friends and family and it raised over £3,000 to be shared between Brain Tumour Research and Brain Tumour Support.

My daughters, Sally (23) and Sophie (21) have been amazing with everything and I am so proud of what they have achieved so far in their lives. Sally is now a qualifying as a teacher, and did amazingly in her exams, even with the worry of her mum being ill, and Sophie has just landed an apprenticeship with Bristol City Council, which she is really enjoying. With the support of John and even the unconditional love of my dog Bert, I am very blessed to have a such wonderful family.

There are some scary statistics online about brain tumours and the survival rate compared to other cancers. Less than 20% of those diagnosed with a brain tumour survive beyond five years compared with an average of 50% across all cancers. It’s just such cruel and devastating disease and there really needs to be more people talking about it and raising awareness.

I have accepted that I am terminally ill and am aware there may be more treatments on the horizon. However, I’m thinking very much in the now, spending precious time with key people in my life and enjoying swimming for as long as I am able to. I don’t ever want to be defined by my cancer. I want to be remembered for being a good friend, a loving sister, daughter and wife, as well as a great mum. 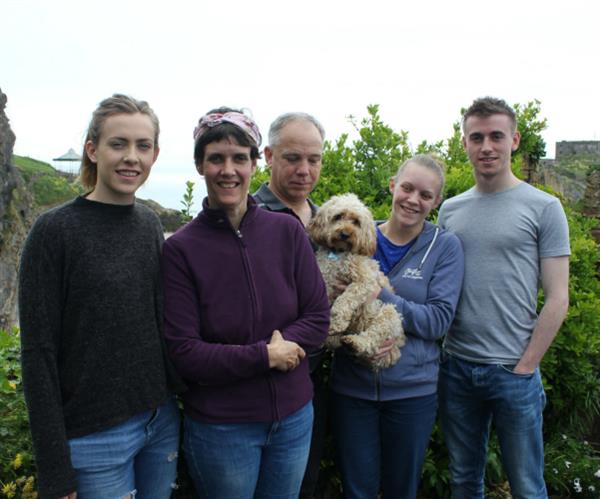