Jorja-Rose was the youngest of six children, adored by her parents and siblings alike. Aged just 15 months, she was diagnosed with a rare and inoperable pineoblastoma brain tumour and underwent chemotherapy and a stem cell transplant which gave her six months of good health. Sadly, Jorja-Rose suffered a relapse and passed away just three months after her parents got married. She was just two years old.

Here is Jorja-Rose’s story, as told by her mother, Carla…

Jorja-Rose was always happy, always had a smile on her face, even when going through treatment; she just got on with it and never complained. Her favourite thing was having stories read to her, especially The Gruffalo. She was a very special little girl.

I had a normal pregnancy with Jorja-Rose, the youngest of my six children, and she was a healthy baby, meeting all her mile-stones up until her first birthday. But after that, I found I was frequently taking her to the GP, initially because Jorja-Rose was vomiting in the morning and then because we noticed her becoming more lethargic. 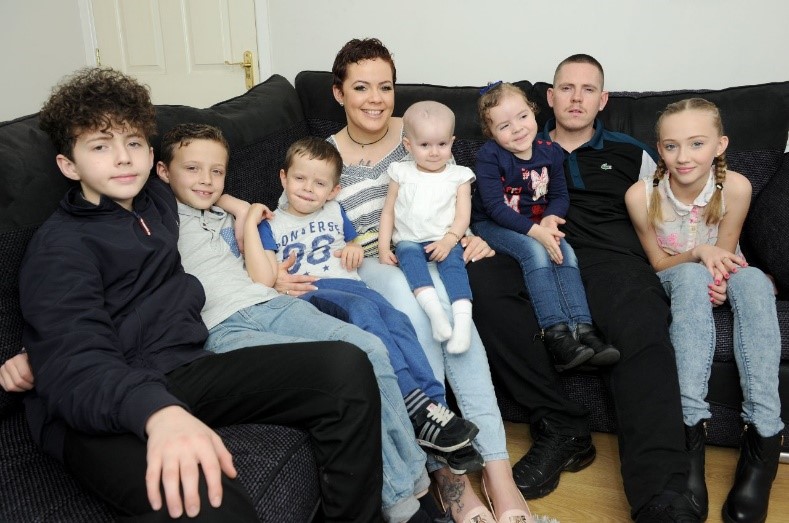 Jorja-Rose had started walking around four months earlier, but she seemed to be losing her balance and slowly stopped walking. I thought it because she was dizzy. Then we noticed that she kept holding her head to one side – I know now that this can be indicative of a brain tumour, but then I thought she had a poorly ear. Throughout our visits, the GP continued to diagnose either a virus or an ear infection.

With antibiotics not making any difference, I started to suspect that something was wrong, but having never come across the symptoms of a brain tumour, that diagnosis was the furthest thought from my mind.

It’s very difficult to understand from a 15-month-old what exactly is wrong, because their communication is so limited, but having googled, I thought Jorja-Rose might be suffering with vertigo or possibly diabetes.

On my birthday on 4 April 2016, around six weeks after Jorja-Rose started being poorly, I had been to the GP again. This time, he gave me a letter to take to the walk-in centre at the hospital which indicated a suspected neurological problem. Jorja-Rose had an MRI scan and the next thing I remember is being given the news she had a brain tumour. We were told she would need surgery and that there was a risk she could be left with disabilities.

“It was absolutely devastating. My very first thought was Jorja-Rose was going to die. I had lost older members of the family to cancer, but no one as young as my little girl.”

I remember thinking the room was closing in on me and thinking that I must be having a nightmare. All through that night, sitting beside Jorja-Rose, I kept hoping I was going to wake up and everything was going to be ok, but of course that didn’t happen.

Two days later, at Queen’s Medical Centre in Nottingham, Jorja-Rose underwent brain surgery to relieve the symptoms of hydrocephalus. Doctors made a ventricle for the CFS fluid to flow through and also took a biopsy. It was such a scary time – it felt like her life was just hanging in the balance.

Jorja-Rose came round from surgery and was like a newborn baby again, having to learn everything again from scratch, including walking and talking. She was also very poorly with lots of ups and downs and needed to remain in hospital for a couple of weeks post-surgery.

The biopsy was sent to Germany and to the US so that doctors could be certain what they were dealing with – in Great Britain just a handful of children under the age of 15 each year are diagnosed with the type of brain tumour which we later discovered Jorja-Rose had. We didn’t get the results until a month later. It was my worst nightmare.

We were hoping the brain tumour would turn out to be low-grade, but it turned out to be a very aggressive and inoperable pineoblastoma, one of the rarer types of childhood brain tumour. We were told the tumour was growing in the pineal gland right in the centre of Jorja-Rose’s brain. When a tumour grows there in the middle of the brain it’s very hard to operate without doing a lot of damage.

“We were also given the devastating news that the tumour would in all likelihood lead to her death.”

Jorja-Rose was under the care of Prof David Walker who told us she needed chemotherapy and started to put a treatment plan together. The only other treatment for pineoblastoma is radiotherapy, but he explained that would be damaging to the brain and very risky for a very young child like Jorja-Rose as it impairs the child’s brain development. 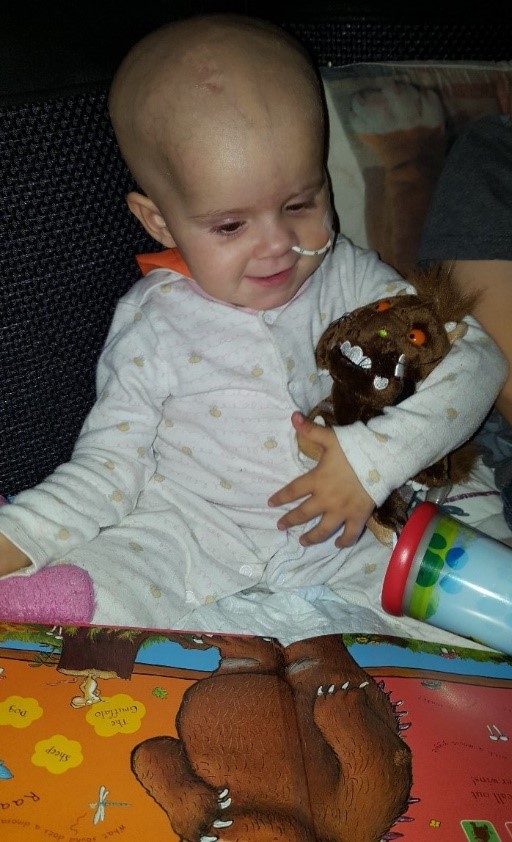 Jorja-Rose remained at home for a while until she stabilised and then started on eight rounds of chemotherapy. Then she went to the Royal Hallamshire Hospital in Sheffield for high dose chemotherapy and a stem cell transplant, which really hit her. She suffered with mucositis – the painful inflammation and ulceration of the mucous membranes lining the digestive tract, usually as an adverse effect of chemotherapy and radiotherapy treatment – and terrible pain. It was the worst thing to see Jorja-Rose suffering. Finally, however, she was well enough to come home just before Christmas 2016.

Not long afterwards, we found ourselves back at Queen’s so Jorja-Rose could continue her recovery, although she remained on an isolation ward for weeks on end.

“On 23 January after an MRI scan, we were told that the tumour had gone. It was such amazing news and the whole family celebrated the end of Jorja-Rose’s treatment when she rang her ‘end of treatment bell’ on 2 February.”

Our joy was tinged with apprehension, however, as we had been warned that Jorja-Rose had a 65% chance of relapsing.

In the next six months, we managed to cram a lot in while Jorja-Rose remained well including going on some holidays and day trips thanks to financial support from local charities PASIC and The Sam White Legacy, making precious memories, and we even got to celebrate two clear scans.

I put a lot of pressure on myself to make memories because I think deep down I knew the tumour would return. But Jorja loved nothing mre than being at home surrounded by her famiy and bossing us all about, ruling the roost! We would have movie nights and discos in our living room – Jorja was a huge music fan, as well as loving her books.

During that time, Lee and I decided to get married and we managed to get the whole day organised in just five months so that we had our beautiful girl there with us, along with her brothers and sisters. It meant the absolute world. Two days before the wedding date of 15 July 2017 however, Jorja-Rose said: “Ow Mummy, my head hurts.” My heart sank. We decided at the last minute not to go away on our honeymoon because it didn’t feel right. Then just 10 days after the wedding we were given the earthshattering news that Jorja-Rose had relapsed. 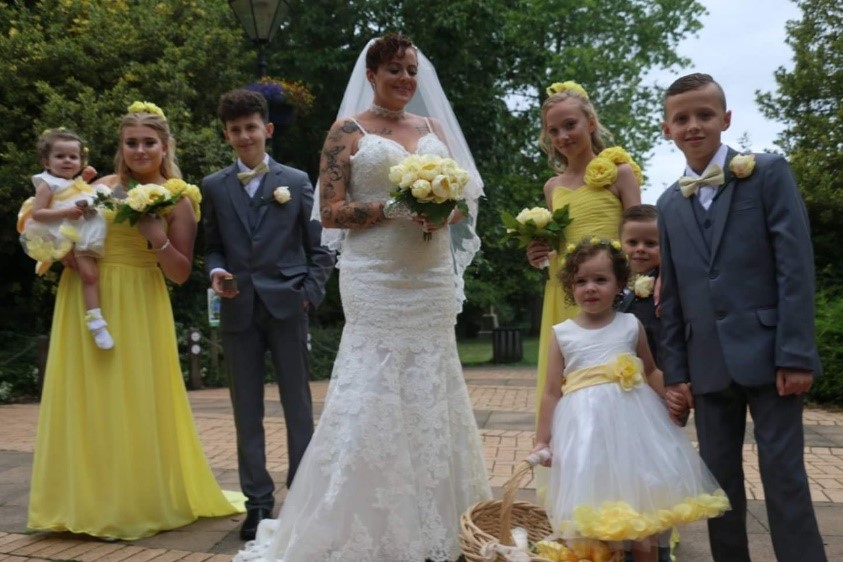 Another treatment plan was put in place, but this time Jorja-Rose couldn’t have intravenous chemo. Instead, a reservoir was placed in her head and the chemo drugs were delivered via the reservoir. We were told this would give her a chance.

Her medical team also planned for Jorja-Rose to have radiotherapy and she went to the preliminary appointments, including having her radiotherapy mask fitted. A week before the radiotherapy was due to start she became very poorly and one day she said: “Mummy, my head’s all wet.” There was spinal fluid leaking out and I immediately thought it was because of a build-up of pressure within her skull.

From then on, Jorja-Rose went downhill. She never started the radiotherapy and we knew that, short of a miracle, we were going to lose her.

My gorgeous, brave baby passed away, aged two, on 21 October at Rainbows Hospice in Loughborough with Lee and me and her brothers and sisters at her side. The last time she opened her eyes we were watching the film Avatar. We loved snuggling up and having a family night.

“You think this will never happen to you, but it does. It doesn’t matter if you are young, old, rich or poor. It is the lottery that no one wants to win – and it picked on a poor, defenceless baby.”

She always had a smile and so many people have said Jorja-Rose changed their outlook and made them appreciate their life. Jorja never moaned and was always happy.

Having all my babies safe asleep under one roof is a feeling I miss so badly.

Since losing my little girl, my life is ruined. I do not enjoy things; everything is an act. I am absolutely devastated and just plodding on. It isn’t really a life.

Every year on her anniversary I have resolved to do something different so that I stay occupied and try to avoid thinking deeply about the significance of the day itself. On her first anniversary I took on a sky dive and this year I abseiled down the Queen’s Medical Centre. 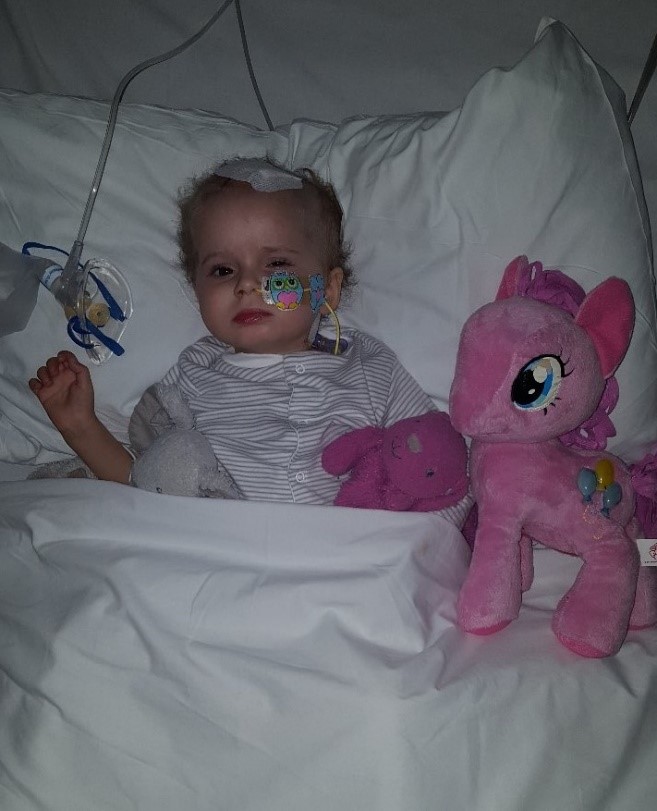 Christmas is not the same and never will be – it’s the worst time of year when someone in the family is missing.

In an effort to do something positive because Jorja-Rose was always so positive, and to keep her memory alive, we have set up the Jorja-Rose Foundation to raise awareness and fund research into childhood brain tumours. The Foundation also supports families who have a child undergoing neurology and oncology treatment at Queen’s Medical Centre, and is fundraising for an iMRI scanner for the hospital which we believe could have helped Jorja-Rose. We feel that with an iMRI scanner, doctors might have had the confidence to attempt to remove Jorja-Rose’s tumour.

“This has been a very hard story to tell, but if it helps even just one child get an early diagnosis leading to swift treatment and they go onto survive, I will know Jorja-Rose’s death has not been in vain.” 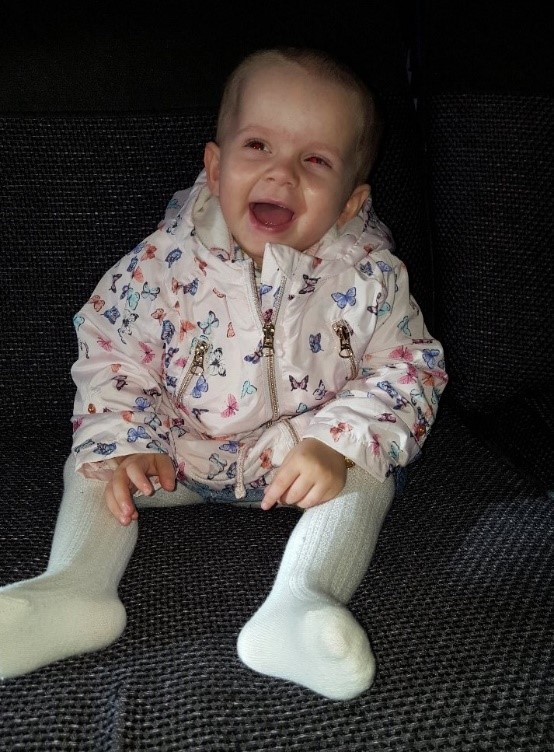