Father-of-five Jon Winn died after a five year battle with a brain tumour he didn’t even know he had. The glioblastoma mulitforme (GBM) which took his life wasn’t diagnosed until after his death. His partner is angry that he was misdiagnosed and endured a nightmare five years struggling to get answers.

“As the months went by, Jon continued to go downhill and I had to give up work to look after him. Jon lost his speech and it became difficult for him to move around. He could no longer play football with the boys. I did my best to see that we could still do things as a family.”
Hayley, Jon’s long-term partner, tells his story …

In 2005, my partner Jon Winn took part in the Great South Run in our home town of Portsmouth. He was raising money for Cancer Research. Little did we know that within months he would be taken seriously ill himself and would die from a glioblastoma multiforme (GBM), the most aggressive form of brain tumour.

I feel as if I lived a nightmare for five years as Jon became progressively more ill. It wasn’t until after he died in May 2010 at the age of 47 that we knew what had happened to him. A post-mortem examination revealed a tumour had been growing in his brain, robbing him of his ability to speak and taking away his independence until he was totally reliant on others.

I was just 17 when we met. Jon was a taxi driver who came to pick me up when I was off on a night out. He was ten years older than me, something which a lot of people questioned but, in the end, we were together for 20 years. We had two sons, Billy now 21, and Ryan, now 16.

Jon was chirpy and bubbly. I was young and found him very attractive and would always ask for him when I needed a taxi! Things became serious a couple of years after we first met and I was 20 when we moved in together.

It wasn’t long after he had completed the Great South Run that we first realised something was wrong. Jon phoned me one day to say that he couldn’t work anymore as he could hear voices in his head. Jon was clearly ill and, to start with, it was put down to a urine infection. He even went to the emergency admissions ward at Queen Alexandra Hospital where I work as a healthcare assistant. We were referred to St James’ Hospital for psychiatric help. It seemed all wrong to me as I was sure this wasn’t a psychiatric problem but I felt I needed to trust the professionals and their opinion.

It wasn’t until January 2006 that Jon had a CT scan. His brain showed no signs of abnormality but he did have a seriously extended bladder and so was catheterised for around six months. In May he underwent an MRI scan which was inconclusive although we were told later that Jon’s brain had shrunk which was an indication he had some form of dementia.

I felt as if things were turning into a nightmare. Jon was ill and his condition was deteriorating. He wasn’t able to work but I continued my job at the hospital and, somehow, we managed. It was very frustrating that we weren’t getting any answers. The nearest we came to a diagnosis was encephalitis and that was what Jon was treated for. Of course this was wrong so the drugs he took didn’t work.

As the months went by, Jon continued to go downhill and I had to give up work to look after him. Jon lost his speech and it became difficult for him to move around. He could no long play with the boys or take them to football matches with their team, Meon Milton. I did my best to see that we could still do things as a family and we would take Jon out in his wheelchair to see them play.

In his last few weeks, Jon’s condition deteriorated very quickly to the point where I could no longer feed him his tablets. It was pitiful to see. He went into the Rowans Hospice where he received the most wonderful care. Three days later he passed away. I was with him along with our boys and Jon’s sons from a previous marriage.

In many ways it was a relief when Jon died because the quality of his life had become so poor. He couldn’t do anything for himself and relied on me for everything which was so different to how he was before.

Although it was shocking to be told that the post-mortem revealed he had a brain tumour, it was good to know what was really to blame for our five years of hell. I feel angry that this happened, sad that we have lost Jon and let down that it wasn’t until after his death that we got a proper diagnosis.

I am taking part in the Great South Run this year in memory of Jon. I hope his story will help to raise awareness of brain tumours. It is shocking to learn that just 1% of the national spend on cancer research is allocated to this devastating disease. 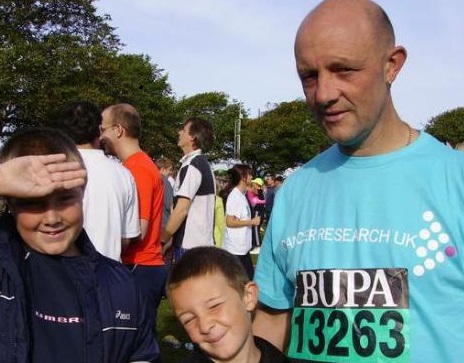