After experiencing slurred speech and severe neck pain, farmer, dad and grandad John Riches was diagnosed with an inoperable grade four glioblastoma multiforme (GBM), a very aggressive form of brain tumour, in 2001. He died less than a year later, aged 58.

“I called home one night to see how they both were and asked if dad was free to talk, to which dad shouted ‘I’ll speak to him tomorrow’ over the sound of the TV show, Have I Got News for You. Sadly, I never did get to speak to him the next day.”

Here is John’s story as told by his son, Stephen…

My family had been farming at Langar Farm, in Edgefield, Norfolk, for over 60 years, breeding pigs and keeping cattle on our mixed arable farm. Both my dad, John, and my grandad, Arthur, loved being up in the early hours to feed the pigs and tend to the cattle.

One of my happiest memories as a child was visiting the local pig market in Aylsham, every Monday with them. I was only little at the time, but it was always good fun sitting on my grandad’s shoulders and guessing the breeds.

Dad had always worked long days on the farm, but in the mid 80s he had to stop the heavy lifting after suffering from severe back pain. He continued with the arable side of the farm, but did less of the strenuous labour, choosing to help other farmers and work at the local aggregate quarry to boost his income.

It was May 2001 when my mum Pam mentioned she was concerned about dad and had noticed that his speech had been a bit patchy and he was suffering with pain in his neck as well as his back. She assured us that she had taken dad to the GP, they thought he could have issues with nerves in his back and neck, but nothing serious.

My dad was a private person and didn’t like to bother people with personal things, so we weren’t surprised he didn’t mention anything. My mum was the one to keep me and my younger sister Louise up to date with how they both were.

They had just returned home from their annual post-harvest holiday when mum mentioned that dad’s symptoms had worsened. Less than a week later I got the call that dad had collapsed and been rushed to hospital. I could hear the worry in mum’s voice, she was convinced it wasn’t a stroke, but I think at that point we couldn’t rule anything out. Dad was admitted to hospital and booked in for an emergency MRI scan.

The results showed dad had a grade four glioblastoma multiforme (GBM), a very aggressive form of brain tumour, which was inoperable. The consultant explained that treatment was available, but we all knew it didn’t look good. I felt sick when I heard the words tumour, as this was the last thing that I’d expected. Mum took the lead in speaking to the doctors about next steps and the treatment that dad would have to undergo.

Dad showed a side of him that day that I had never seen before. He was always very jovial, laid-back and positive, but when he received that news, he stayed quiet and reserved. You could see fear, confusion and shock all over his face.

After initial investigations and a biopsy at Addenbrookes Hospital, dad began an intense course of radiotherapy at the Norfolk & Norwich Hospital, which was tough for dad and all the family. As he wasn’t well enough to take on his usual role on the farm, my grandad and some farming friends stepped in to help out. Dad tried to keep himself occupied with artbooks and making bird boxes, but you could just tell he would have rather been up and about, tending to the farm.

Christmas was subdued that year. There would usually be celebrations throughout December as my grandad and parents were born at Christmas time, grandad on the 19th, dad on the 22nd and mum on the 28th. However, that year we all struggled to put dad’s illness to the back of our minds. Mum and dad chose to spend Christmas with my sister and her new baby girl, Molly, which lightened the mood a little. It was special for both of them, as they got to spend time with their first grandchild.

The following January dad was feeling a little better as he had finished the treatment. I called home one night to see how they both were and asked if dad was free to talk, to which dad shouted ‘I’ll speak to him tomorrow’ over the sound of the TV show, Have I Got News for You. Sadly, I never did get to speak to him the next day.

The following morning dad had got up to go to the bathroom, where he collapsed and died as a result of a haemorrhage from the tumour. The call from my mum that morning is one of the hardest conversations I have ever had.

I think grandad took my dad’s death the hardest. He lived next door and would always pop round to see how he was doing and to greet dad when he returned home from hospital visits. I think he believed dad was going to be OK and fight the tumour. He never thought that he would outlive his son.

Mum was strong after dad’s death and tried to keep the family together. When she was diagnosed with breast cancer in 2008, she used that same strength to fight it. However, cancer is an evil and destructive disease and we lost her in 2014.

I found the death of my dad a lot harder to deal with then the death of my mum 12 years later. Dad always wanted to die with dignity and not be a burden to his family, so I take reassurance from the fact he didn’t suffer like mum.

Even though I have lost both my parents, I live my life with my dad’s motto ‘whatever will be, will be’, making the most of life and my good health. I think that is what my parents would have wanted me to do, live my life and take nothing for granted. 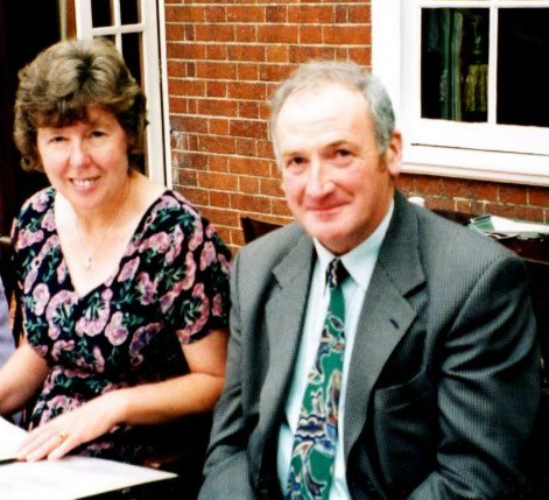