John was looking forward to a long and happy retirement with his wife Judith. Previously fit and well, he began experiencing seizures and was later diagnosed with a low- grade glioblastoma brain tumour. Within months the tumour had changed to an aggressive grade IV and he underwent radiotherapy and chemotherapy. He defied expectations to live for three-and-a-half years, losing his battle in June 2014.

Here, his wife Judith tells his story …
John was 61 when he died on 24th June 2014. He was a cleaning and environmental services manager at the University of Plymouth and had been there for 16 years.

In 2008 he started having small seizures and it was quite a few months before we got to the bottom of what was causing them. It turned out to be a tumour which could have been in his brain for years. He was diagnosed with a low-grade glioblastoma.

John was given tablets to help control the seizures but, to be honest, they didn’t really help and he took early retirement through ill health in 2010. Diagnosis meant he was no longer able to drive so I had to take him into Plymouth to work every day and then he would get the train home again.

It was early in 2011 when he had a scan which revealed the tumour had grown. This was followed by a biopsy which took place at Derriford Hospital. As John couldn’t bear the effects of a general anaesthetic, he elected to have the procedure with just a local anaesthetic. Goodness knows how he did that.

Unfortunately, the results showed the tumour had changed. It was an aggressive grade IV. We were told by the doctor that, without treatment, John could expect to live for about two months but with treatment he could expect to have around another 20 months.

This is one of the reasons why I feel research is so important. The radiotherapy and chemotherapy drugs that John had, meant he lived for another three and a half years – an improvement on the 20 months we were told to expect.

I am sure that the time he had left was increased by the drugs he had. The more research that can be done the better. It will help to further improve outcomes for others, it will give people more time and, hopefully, eventually lead to a cure.

You are told by the doctors that you have a brain tumour and it will grow back again. You learn that the treatment will only help for a certain amount of time. As you imagine, that is devastating and you live in constant fear.

So little is known about brain cancer. The situation is different with other types of cancer where some patients can have their tumour removed in its entirety or the treatment means they are in remission. That doesn’t happen with brain tumours.

John was from Glasgow and I was born in Torquay. We lived in Sheffield for a while and then moved back to Devon 20 years ago. We loved to take long walks together and we had a dog we enjoyed taking out.

As a result of his condition, John’s mobility was badly affected and it became harder and harder to do the things we had loved. I retired from my job as a trainer in school play work, where I was involved in encouraging more children to get active, in order to help John get around. The medication designed to help with John’s seizures made him fell unwell and we weren’t able to fly because of the effect the cabin pressure would have on him.

We drew up one of those dreadful bucket lists so we could plan to do things we might otherwise not have got round to. We went to the Ice Hotel in Sweden and also had a trip on the Orient Express although we weren’t able to enjoy that one as much as we had hoped because John had been badly affected by the flight out there.

We were very lucky to have such marvellous support from the local home care team of the Rowcroft Hospice in Torquay. At the end, John’s condition deteriorated quickly and he died at home on June 24th 2014. 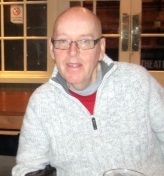