Composer, pianist and former Director of the London College of Music, John McCabe CBE was lost to a brain tumour on 13th February 2015, just weeks before his 76th birthday. He had been married to Monica for 40 years and lived in Kent. John was widely loved and respected across the world of classical music.

His wife Monica tells his story …
John and I celebrated 40 years of marriage on 31st July 2014. We had lived together for a year or so before that and, even though I have strong, loving relationships with the rest of my family, John was everything in the world to me. Losing him has torn me apart. I cannot properly describe my distress. He was 75 and died just a little before his 76th birthday. Some people might say: “Well, what do you expect? He was an old man anyway.” But John did not die of weakness, old age, or failing powers. He was vigorous, mentally and physically, and still working hard. It was the brain tumour which killed him and, in the latter six months or so, the failure of the NHS properly to combat or treat it, together with a lack of research into the causes and cure of such cancers.

John was not only brilliant; he was the best of men, with so much more to give the world. He was widely loved and respected across the world of classical music. Even while he was ill he wrote an enchanting orchestral work entitled Joybox for the Proms, premiered at the Royal Albert Hall in July 2013. He also wrote a big Sonata for Trumpet and Piano for the Deal Festival in 2014, and a major choral work entitled Christ’s Nativity, premiered by the Halle Choir in Manchester in December 2014. We managed to attend the Prom performance but, sadly, John was sick at the time of the Deal Festival and too ill to go to the Manchester premiere of the choral piece. He still had so much music in him, and I have manuscripts of the start of a number of big works which are now lost to the world.

He was stoic, he was patient, he was amazing- almost to the end, until his unhappy two stays in a local hospital which was headlined in the national press while he was there as possibly the worst in England. I feel the need deeply to find out the causes of all brain tumours but especially the aggressive glioblastoma multiforme from which he died. My heart goes out to other victims and their families, and I honour those who are working at fundraising to find a cure, or at least better treatments.

John was a man of absolute integrity and honour. He was devoted to the art of music, which ranked higher with him than any personal success. He showed no jealousy or malice at the good fortunes of colleagues and peers, delighting in the success of their musicianship, and if possible furthering their interests by performing their works, in some cases by arranging concerts, and in others  performing or recording their keyboard works himself. His knowledge of music was encyclopaedic, and his enthusiasms spread widely, from Byrd to Bruckner, from Haydn to Satie, Rawsthorne and Tippett, via Vaughan Williams, Schubert, Schumann, Liszt, Ravel, Debussy – the list is endless, though artistic quality was the basis of his admiration.

From an early age he loved to explore little-known works, and champion composers he considered unjustly neglected – thus he came to record the entire piano sonatas of Haydn (which have been continually on sale since the 1970s), the solo piano repertoire of Nielsen, and the magnificent Ludus Tonalis of Hindemith, which he considered a masterwork, along with the Suite Op. 45 of Nielsen. His pianistic technique was first-rate, particularly in his 30s and 40s, and he was also a brilliant sight-reader. Never possessed of a massive sound, he could nevertheless make a note float across a smaller recital hall as if it had scarcely emanated from the instrument, but existed of itself. In all cases he tried to be totally faithful to the vision of the composers, rather than his own.

As a composer he was modest and self-deprecating. Once satisfied with the work he had written he seldom listened to it again. He was more interested in the next piece. I’ve known him, at a meeting intended to promote his own music, to spend much of the time enthusing about the work of a fellow-composer. While seldom teaching, he was deeply interested in furthering the careers of young composers and instrumentalists, and gave first-rate master-classes, not insisting on his own viewpoint, but encouraging young musicians to pursue – or defend – theirs.

Nor were his interests limited to music. He nearly chose to study English Literature at Cambridge, rather than music in Manchester and he was very widely read. He also took a deep interest in matters of a more relaxing nature (to him) such as cricket, golf and snooker. He had, as most cricket enthusiasts do, an encyclopaedic knowledge of every match ever noted in Wisden, the cricket-lovers’ bible. Malt scotch and cigars (later pipes) also stood high in his regard. As a teenager he would “skive off” school to cross the Mersey and go to the cinema. Again his knowledge and love of films was detailed and devoted, from world cinema to the Western genre. Music, however, stood paramount with him, and was his longest devotion, writing and listening to it almost to the end. Since becoming ill he wrote three major works, full of intellectual quality and often amazing joy. Many of his works, including the Sixth and Seventh Symphonies, and his deeply moving Cello Concerto, stand in need of commercial recordings.

My husband did not deserve to die in the cruel manner fate dealt out to him. An aggressive brain tumour, such as he suffered, has no known cause, and is inoperable and incurable. He bore the treatment with great patience and stoicism, until the distress of the end. He lost the use of his legs and his left hand. His hearing and eyesight suffered. But almost until the end he retained his faculties, except when very tired and exhausted. Sadly he realized in the end that getting the musical thoughts in his brain down on paper was becoming too difficult for him. He left behind him the groping steps towards a short choral work based on the speech of King Lear on the blasted heath – a fascinating choice, if only he could have finished it. He also had the beginnings of two string quartets, a solo cello work and an Eighth Symphony.

Brain tumours can affect anyone. Brain tumours kill more children and adults under the age of 40 than any other cancer ... yet just 1% of the national spend on cancer research is allocated to this devastating disease. This is unacceptable!

Research is our best hope and the charity Brain Tumour Research stands out with its commitment to fund dedicated research centres.

John McCabe was my husband and partner, friend and mentor. I learned so much from him. I do not know, at present, how I can live without him.

The photograph shows John at the IVORS Awards ceremony in May 2014. He was presented with a Lifetime Achievement Award by the British Academy of Songwriters, Composers and Authors. His speech received a standing ovation. 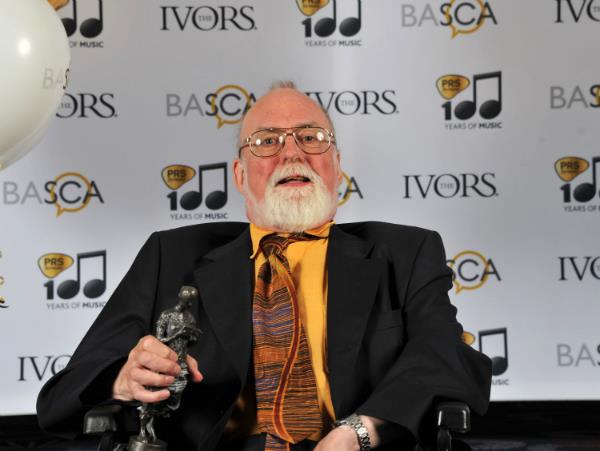