Jeffrey was diagnosed on 14th February 2012.  Valentine’s Day will never be the same again for me.

We had already noticed that Jeffrey’s speech was a little strange and that he was having some issues with his balance.  He had also started struggling to complete the time sheets for his local council job.  It was thought he had suffered a mini-stroke so it was a real shock when Jeffrey went for a scan to discover he actually had a brain tumour.  When I saw the scan I knew straight away – I had seen his father’s MRI scan two years earlier and his tumour and I recognised it immediately.
Having been admitted to the University Hospital of Wales in Cardiff, Jeffrey had a biopsy, but was told his tumour was too deep for surgeons to operate on.

Our son, Christopher, and I looked after Jeffrey at home.  Christopher and Jeffrey had always had a very close relationship and both shared a love of watching films together either at home or at the cinema.  Until Jeffrey fell ill we had enjoyed a lovely family life and had many wonderful holidays together – our favourite destination being Turkey.

Jeffrey underwent chemotherapy and radiotherapy, losing his hair.  His treatment also made him very tired and sick until his sickness medication was changed.
He developed epilepsy.  I had never seen a seizure before and remember he had a bad one in the bath when I had to pull the plug out and support his head while the water drained away.  The seizures got worse and worse until one that was so bad Jeffrey had to be sedated and a breathing tube inserted.  It was then that the radiotherapy was stopped.

As time went on, there seemed to be one thing after another.  Jeffrey had a blood clot in his lung, then a bleed on his brain; he lost his speech and therefore his ability to communicate with us.  We were supposed to be getting married, but had to cancel the wedding because Jeffrey lost the ability to even be able to write down his vows.

It was very hard for Christopher too who often stayed off school to be with his Dad.  He knew his father was dying.

Jeffrey died at home with his family around him just nine months after his diagnosis – me, Christopher and his two adult children.

Christopher is intent on doing all he can to raise funds for research and won a Local Hero award – Achiever of the Year from our local Wave radio station.  And both last year and this year has enlisted his school – Bishop Vaughan in Swansea – to take part in Wear A Hat Day (for which he was last year awarded a trophy for fundraising from the school).  I am so proud of him – he stood up on stage at assembly to tell the whole school why they should wear a hat and support Brain Tumour Research in memory of his Dad.  Christopher says: “I want to help do my bit to find a cure so no other family has to go through what my family has had to.”

I didn’t realise how many people and families are impacted each year by brain tumours.  It is terrible.  I urge everyone to sign the e-petition to lobby the government for greater funding.  It is unacceptable that brain tumours are the biggest cancer killer of the under 40s yet receive less than 1% of cancer research funding in the UK. 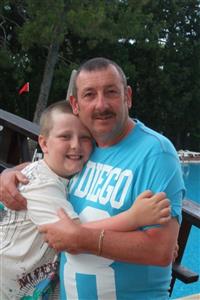