Jay Sherrell passed away in May 2015, a little over three years after being diagnosed with a grade 4 glioblastoma multiforme. She was 43 and left two young children, an identical twin sister, an older brother and sister plus her mum.

“Although we had known for some time that this moment was coming, I was still extremely shocked when Jay died and, to start with, didn’t really cope at all. I truly felt as if I had lost my shadow. It was as if someone had cut off my arm. I still dream about her a lot and have flashbacks of the times that we were teenagers doing silly things. I talk to her all the time as if she is still here with me. Of course I miss her like mad but I see her every day when I look in the mirror.”
Jay’s sister Clair tells her story…

Our parents already had a boy and a girl and weren’t aware until fairly late on that their “new baby” was actually going to be twins. Jay was my identical twin, we were born on 22 June 1971 and were always as close as I think two people could be.

It was hard to tell us apart. A small freckle on the left ear – mine but not hers – was virtually the only way of distinguishing one from the other and of course only those really close to us would know this. As well as looking so alike, we both shared personality traits and were stubborn and feisty. We were quite naughty too and would play tricks on people at school. Even when were older we were still at it. I still laugh when I think about how we swapped clothes at a 21st birthday party. It was quite a while before anyone, including our boyfriends, noticed.

I don’t know if it is the same for all identical twins but Jay and I were always very close. We would know what the other was thinking and were always aware of exactly how the other felt.

We were in the same class until senior school when we went into different forms. I left school to start work while Jay went to South Downs College in Waterlooville where she studied catering. She worked as a chef for a while before retraining and joining the staff of Hampshire Police. She stayed with the force for about 20 years and worked in various roles at police stations such as Eastleigh, Fratton, Cosham and Havant.

Although we built our own lives getting married and having families, we remained close, physically as well as emotionally – we ended up living just 17 doors away from each other in Havant.

It was me who accompanied Jay to the doctor in February 2013 when she began to complain of migraine-like headaches and dizziness. She underwent some neuro tests which she sailed through but, a couple of weeks later, I had a call from one of her kids – she had two girls – asking for help as Jay “wouldn’t get out of the bath.” I immediately knew something was wrong, she seemed to be acting very strangely and we called an ambulance.

Initially it was thought she might have had a small bleed on the brain but she was allowed home within a couple of hours. Two weeks or so after that I came home one day to find her having a seizure on the sofa. This time the hospital told us she would have a brain scan and then a lumbar puncture and it was at that point we realised something was seriously wrong. She didn’t need the lumbar puncture as the scan showed she had a grade 4 glioblastoma multiforme, the most common and aggressive form of brain tumour.

At first, Jay didn’t want to have the surgery which was needed to remove as much of the tumour as possible although without the procedure her life expectancy could be as little as six months. Our older sister, Linda, who attended all Jay’s hospital appointments, helped her to see that she had to do what she could and not just for herself but for her children Izzy, now 14, and Bethany,16.

Understandably, Jay was very frightened. It was as if agreeing to the operation made her diagnosis real. However, she did go ahead but it didn’t help that she was admitted to Southampton General Hospital on 13th March 2014, the first anniversary of our father’s death.

The tumour was successfully removed in the operation which took several hours. As she came round she asked one of the nurses in recovery to let us know she “wasn’t dead yet”!  We took this as a good sign, she was back to her old self.

Despite such moments of humour, we all knew it was likely that the tumour would come back. Jay and I had been deeply shocked by her diagnosis but characteristically she was determined to beat the cancer and that stubbornness was present in everything she did. Jay recovered well from the surgery with no lasting problems and underwent radiotherapy and chemotherapy which seemed to help a bit. She had a phased return to work during August and September that year.

Sadly, it wasn’t long before I noticed she was behaving oddly once more. I don’t think she realised what was happening and she started having seizures again. It became clear that she wasn’t able to look after herself and the children so the girls went to stay with their father – he and Jay were divorced - while Jay went to our mum’s.

After that, Jay’s condition deteriorated rapidly. She had no strength in her legs and was soon unable to get out of bed. In early October, she went into Rowans Hospice at Waterlooville and she also had a spell at a nursing home in Fareham. After Christmas, Jay was sleeping a lot and we knew there was nothing more anyone could do. It was heartbreaking and I felt helpless as she lost her sight and the use of her arms. Typical Jay, she managed to joke that she was going to haunt me! She had always been witty and held onto her humour until the end. It was amazing.

There was only one thing I could do and that was to be there for her and to do the best I could to stay positive. My oldest son Joshua would do anything for his Auntie Jay and was with me and Linda as Jay passed away. I could feel her slipping away and, extraordinarily, as Jay’s heart rate dropped, my own was racing and causing pains in my chest. It was as if I could feel the moment of her death coming. She had been unable to speak but, in her final moments, she lifted her head from the pillow as if she was trying to say goodbye.

Although we had known for some time that this moment was coming, I was still extremely shocked and, to start with, didn’t really cope at all. I truly felt as if I had lost my shadow. It was as if someone had cut off my arm. I still dream about her a lot and have flashbacks of the times that we were teenagers doing silly things. I talk to her all the time as if she is still here with me.

Of course I miss her like mad but I see her every day when I look in the mirror. It is comforting but very odd at the same time. Sometimes I catch myself with a particular expression or mannerism and think it is my twin I see looking back at me.

Throughout our lives, Jay and I either saw each other or spoke on the phone almost every day. This is the longest we have ever been apart and the only way I can bear this is to imagine she has emigrated to Australia and that I will hear from her soon.

Mum is finding it very hard to cope. Our grief is unpredictable and comes at us like a wave. Some days you feel as if you are beginning to get back on your feet while on others you feel it crashing down on you. 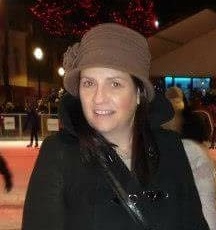