Jane Packer was busy revolutionising the world of floristry and raising a family when she was diagnosed with an aggressive brain tumour that turned out to be a glioblastoma grade 4. Following gruelling treatment, Jane was able to return to work and live a normal life until a stroke six years later heralded the return of the tumour. After she passed away in 2011, her husband, Gary Wallis, set up the Jane Packer Foundation in her memory.

“During the years of her illness, we busily researched the treatment options available and were shocked to find out that brain tumour research was so seriously underfunded in the UK.”

Here is Jane’s story, as told by her husband Gary Wallis…

Jane’s first job was as a Saturday girl in a local florist's shop; she fell in love with flowers on her first day and spent all her wages on blooms to take home. Her passion developed further, with her first step of a City & Guilds course in floristry and horticultural studies at Southwark College.

By the time we lost her, Jane had not only become a wonderful wife and mother, but also an internationally celebrated florist with famous clients from rock stars to royalty.

In the early days, Jane briefly left floristry to work for a knitwear company and this experience really inspired her to think about flowers as part of the fashion world and interior art, which was a very new idea at the time. It’s incredible to think that this brave and passionate young woman signed a 25-year lease on a shop in central London when she was only 22; she was so clear-sighted.

It was very hard work: seven days a week, pre-dawn starts at the flower market, no holidays, and barely getting by. There wasn’t much money around for promoting the business but Jane took a smart and creative approach to marketing, even sending her proposals accompanied by an artichoke to get attention! It worked and only a year later The Times featured one of her bridal bouquets.

Jane got into the business at the perfect time. The 80’s was when wholesalers started importing more unusual flowers and there was an explosion of possibilities for floral designers. Jane’s work was always simple, unpretentious and fresh and that got her noticed as a pioneer. She created the flowers for the 1986 wedding of Sarah Ferguson and the Duke of York, earning her an international reputation in the industry.

She truly changed the way people think about flowers and helped to revolutionise floristry, writing many books and setting up Flower Schools around the world. Jane had a vision of what flowers could be, and the effect they could have, and always wanted to share that vision.

We moved to our Marylebone premises and got married in 1990, working together to create a family and a business. Jane won a Royal Horticultural Society Gold Medal every year between 1993 and 1997. It was an incredible time, busy but inspiring!

In 2004, Jane began to feel a numbness in her right leg which wasn’t improving. Then came the devastating news that doctors had found a particularly aggressive brain tumour that turned out to be a glioblastoma grade 4, which normally doesn’t have a great prognosis. Jane went through a tough course of treatment involving radiation and chemotherapy, but amazingly she made a good recovery. She was able to return to work and live a normal life.

In 2010, Jane suffered a stroke which is suspected to have been radiation-induced following her treatment six years earlier. Regretfully, the tumour returned, causing a massive stroke in October 2011 from which Jane never recovered. She passed away on 9th November 2011.

During the years of her illness, we busily researched the treatment options available and were shocked to find out that brain tumour research was so seriously underfunded in the UK. There was, at that time, no specific research into glioblastoma and nearly all of the promising treatments were being developed in the USA. Although there were opportunities in the States to participate in clinical trials (usually restricted to newly diagnosed patients), there were no UK centres affiliated with the trial of emerging therapies.

Since I set up the Jane Packer Foundation, to raise awareness and funds, we have seen our partnership with Brain Tumour Research grow and flourish. There’s now a dedicated Research Centre of Excellence at Queen Mary, University of London, studying glioblastoma. This, alongside our children, and of course and the Flower Schools and shops, is part of Jane’s lasting legacy. 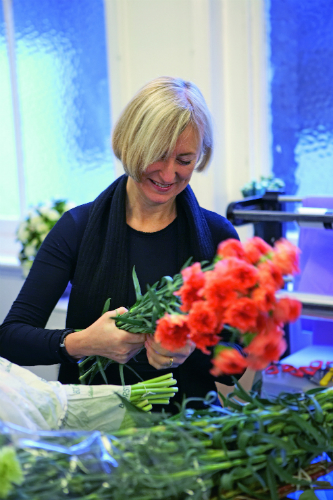