James just wanted to carry on as normal after he was diagnosed with a brain tumour. He endured surgery, chemotherapy and radiotherapy, but still managed to make his 4am shifts at work, providing for his wife Samantha and their two young children. James saw his favourite band Guns N’ Roses just a short time after leaving hospital in 2017.  He suffered dreadful personality changes at the hands of his tumour together with memory and speech difficulties.  He will always be remembered as a gentle giant and a loving dad.

“The doctors reassured us that James’ tumour wasn’t aggressive, and there was no immediate rush to operate, but deep down I feared that it would never be cured and we could one day lose him. I was angry at myself for not recognising the signs. The headaches, sickness, the personality changes; all that time we never imagined that James had a brain tumour.”

Here is James’ story, told by his wife Samantha…

James is fondly remembered as a gentle giant. I was just 18 when I met him, a 6ft 5in 24-year-old, in a nightclub on the Margate seafront. He was the most caring man with a lovely smile and we hit it off instantly.

We married in 2005 and things were wonderful. Later on, James was an amazing dad to our son Charlie, and daughter Ella, and he worked incredibly hard, as a shop assistant at Asda in Broadstairs, to provide for us all. Life wasn’t always easy and financially things could be tough, but we were happy.

It was in 2013 that James frequently complained about having headaches; they were sometimes so bad that he was sick. I nagged him to see a doctor but, James being James, he insisted he didn’t need to book an appointment. I’d noticed that he’d developed a short temper at times, which was unlike the James I knew, but I put this down to the stress of raising two youngsters and the stresses and strains of daily life.

James suffered from a particularly excruciating headache a few days after Christmas in 2013, and he was vomiting all day. He looked desperately weak and wasn’t able to keep any food down and, in the evening, as we dozed off to sleep, he started shouting. It was terrifying. I assumed that he was having a nightmare and was startled as I turned the light on and tried to wake him up. He wasn’t responding. Blood was pouring from his mouth and I realised he was biting his tongue and having a seizure. Panicking, I called an ambulance and James was taken to the Queen Elizabeth The Queen Mother Hospital in Margate.

An MRI scan at the hospital showed that there was a ‘lesion’ in James’ brain but I didn’t understand what that meant. He was referred to King’s College Hospital for further tests and, in the meantime, he returned home and was soon back to work; we tried not to worry too much. James had to surrender his driving licence after the seizure, which was difficult for him, but, determined as ever, he still made his 4am starts by taking a taxi.

We received a letter from King’s College Hospital, who had asked us to come in for an appointment, and we were told that James had a brain tumour, which was presumed to be a low-grade glioma. The doctors reassured us that James’ tumour wasn’t aggressive, and there was no immediate rush to operate, but deep down I feared that it would never be cured and we could one day lose him. I was angry at myself for not recognising the signs. The headaches, sickness, the personality changes; all that time we never imagined that James had a brain tumour.

James had surgery in March 2014, although his tumour, which was described as a spider-like, had attached itself to nearby blood vessels, so the surgeons weren’t able to remove it all. His tumour was eventually diagnosed as a grade 2 astrocytoma.  After the operation, he struggled to communicate for a few weeks due to a condition called dysphasia, even after he’d left hospital. When he was able to talk, he’d come out with random and sometimes rude outbursts, as if he didn’t have a filter for his speech. He was also very confused. Luckily these symptoms improved over time.

We moved house later that year to be closer to James’ work. He was such a trooper and, after just three months off sick, he returned to his employment, walking 20 minutes there and back every day to get there. He had temozolomide chemotherapy and a follow-up scan showed that the tumour had disappeared. We were thrilled to hear the news, but I still had a gut feeling it would return.

James got his driving licence back, which was a relief to us all, and we enjoyed holidays together as a family. We travelled to Turkey in 2015, Butlin’s in Bognor Regis the following year and Disneyland Paris in February 2017 and, after a traumatic period, these memories meant a lot to us.

Devastatingly, in March 2017, we were told that James’ tumour had returned and this time it was inoperable. It felt like we’d taken a huge step back. Yet again, he lost his driving licence and, while he wasn’t one to worry, and seemingly shrugged off this awful news, I was terribly concerned about what the future had in store for us.

James had radiotherapy at the Kent and Canterbury Hospital in August 2017 and this stabilised the tumour. He had a small brain haemorrhage a few months before his treatment and spent a lot of time in hospital. I struggled to keep Charlie and Ella informed. I didn’t want to scare them but I had to be honest, and I told them ‘we don’t know if daddy’s illness will ever go away’.

Watching James’ personality change at the hands of this horrible disease was heart-breaking. It was very hard for the children as James could be less tolerant than he once was.  James became frustrated when he had difficulties with his speech as he often struggled to find the right words.

Earlier this year, we welcomed a lovely little Cockapoo, Maisie, into our family and she was wonderful for both James and the kids. I think she helped to keep him going. I could see that James was slowing down and getting tired, and he spent more time in the house. As his speech deteriorated, I pushed to get the results from his latest MRI scan, but they only confirmed my fears. The tumour was growing again.

James was hospitalised on 6 September and I couldn’t understand how quickly he’d declined. His speech was so badly affected that he couldn’t communicate and we had to make a picture book for him to point out when he needed simple things, like a cup of tea or coffee. He was very confused and I didn’t want to leave him. He had PCV chemotherapy and I desperately hoped that this would work.

After a week in hospital, James was taken to Pilgrims Hospice in Thanet, where he spent his final days. I hated seeing him suffer and he struggled to even take himself to the toilet, but he desperately wanted to remain independent. The hospice staff were great to us all and offered me lots of hugs and hot drinks. James fell into a coma and I was able to sleep next to him in a hospice bed. His death, on 21 September, was as peaceful as it could have been and I was there with his mum, sister, two brothers and best friends. He fought so hard and was so brave.

James was an avid Guns N’ Roses fan and it was fitting that, just a short time after leaving hospital in 2017, he was able to see them live. He travelled to London by himself and, though I was really worried about him, it was wonderful that he got to see his favourite band, wearing their T-shirt and dancing to their hits, which helped him to escape his diagnosis if only for one evening. He never wanted to be defined by his tumour and I will always be in awe of his fierce independence, as I look back on the many years we shared together. 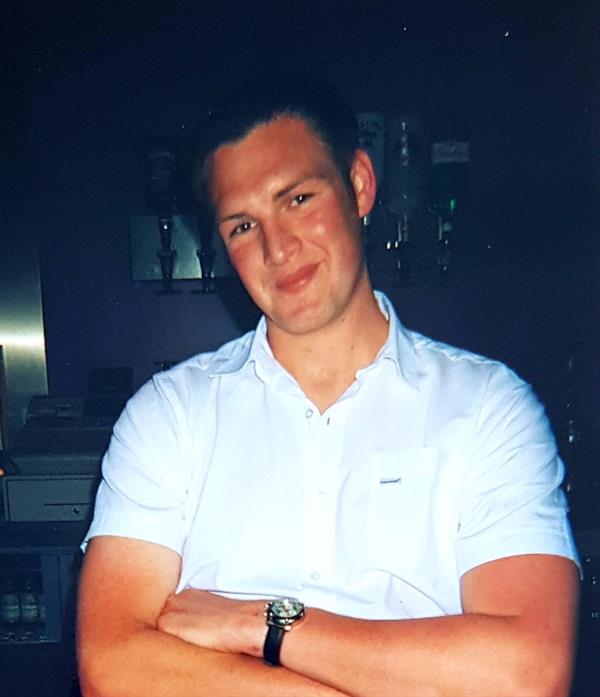