Diagnosed with a brain tumour at just 14 months, Isabella defied the odds to outlive her prognosis before she passed away aged five, at home in her mother’s arms, with her three doting sisters kissing her goodbye. Despite her illness, Isabella remained a happy child who loved to sing and dance, to play with her dolls and feel the wind in her hair. She went to school whenever she could and is much missed by so many.

“It was very touching that, as the funeral procession passed school, the teachers were standing by the fence and her classmates were in the playground, calling out ‘Here’s Isabella’ and waving. I don’t feel angry about what happened but I do feel a great sense of sadness that Isabella didn’t get the chance to grow up. I will be forever grateful for the doctor’s honesty which allowed me to accept that, sometimes you have to settle for quality of life rather than quantity, and this allowed me to ensure we gave her the best life possible.”

Isabella was just 14 months old when she was diagnosed with a brain tumour. It turned out that her “jelly legs” as we called them and her sensitive palms weren’t things that she would grow out of but caused by a tumour which was aggressive and incurable.

My eldest daughter Rebecca was four and I was six months pregnant with my third child Sophia when we received the news. I had always known there was something wrong but, at first, when I took Isabella to the GP with concerns about her not hitting the usual milestones, I was dismissed and told that all children developed at their own pace.

Since she was nine months old, we had called Isabella our “jelly baby” as she was soft and floppy and, later on as the brain tumour grew, we continued to refer to her jelly legs which continued to fail her.

My mother’s instinct had continued to tell me that all was not well and I persisted; thank goodness I did. We saw a doctor at the Royal London who detected a possible hip weakness. An X-ray revealed there wasn’t a problem and we were then referred to a paediatrician at King’s College Hospital and it was there that they finally picked up that Isabella was regressing; instead of developing she was actually going backwards. Cerebral palsy was suspected, but an MRI finally revealed the worst possible scenario.

Isabella had a large brain tumour, the largest the neurologist had seen in a child of her age, and it was putting a huge amount of pressure on her brain. We took her home to await surgery on 22nd December 2011. The surgeons managed to remove around 80% of the tumour and we were told a week later that the growth was cancerous. We later learned that Isabella was 1:900,000 children who had the high-grade anaplastic glioma.

I went into research mode. It was important to me to know everything there was to know and to try to understand what we were up against. Chemotherapy was delayed as there was a build-up of fluid causing a lump to appear on the side of Isabella’s head. A shunt was fitted to drain the fluid away and we started on 12 months of chemo in February at the Royal Marsden in Sutton. I was aware of proton beam therapy, although was told it wouldn’t work for us, but I was determined to get the best I could for Isabella and we went to UCL for a second opinion. I was told in the most direct way possible what the future held for us: my little girl wasn’t going to grow up. It was the worst thing you can hear but, in a way, I was thankful and from that moment on our focus shifted from keeping Isabella alive for as long as possible to giving her the best possible quality of life for however long she had left.

The chemo kept the tumour stable but when it started to make her horribly sick we decided to stop the treatment. Walking out of the consultant’s office and thinking that we were taking Isabella home to die was the hardest thing.

Faced with what was possibly going to be Isabella’s last Christmas, we wanted to make it the best it could be. A friend even turned an unused church into a winter wonderland and many people in the community rallied round to make it a magical party. By February we were told she had three months or less but Isabella defied the odds and lived for two years and three months.

In many ways we were very fortunate as, outwardly, she didn’t seem unwell and she managed to continue life as a relatively normal little girl, albeit one with a brain tumour. We had trips to Disneyland and went to Blackpool where Isabella was thrilled to have the wind blowing in her hair. She had always loved her long, full mane of red hair which, thankfully, grew back beautifully after the shock of losing it during treatment. Her jelly legs had been a constant feature and we were all used to helping her walk outside; she loved to sing and dance, to try on make-up and play with her dolls. By then our baby Gabriella, who we still call Dolly, was a year old, and the two of them would snuggle up together on the sofa.

Towards the end of April 2016 that Isabella’s condition deteriorated dramatically. It was around my birthday that something started to go wrong with Isabella’s balance. She started to have absence seizures and it was as if she was drifting off for a little day dream for a few seconds or up to a minute.

Although Isabella had managed to get back to Thorntree Primary in Greenwich she has having a rest day and we went out for breakfast on my birthday after the older girls had gone to school.

Isabella was being sick so we came home early and I contacted the school as I knew we needed to have Rebecca and Sophia back with us. We were together for her final days as Isabella, brave to the last, lost her sight and increasingly became unable to control her limbs.

We took her to hospital where, unable to be easily moved from the specially-adapted pushchair I had borrowed, the doctor and I sat on the floor as Isabella was examined. Faced with just a day or two left with my precious girl, we chose to take her home rather than prolong things with steroids or antibiotics.

By the following day we were losing Isabella although she was very calm, reaching out to catch falling lollipops and butterflies which appeared in her hallucinations. There came a time that she started to have the most awful seizures when her whole body would go rigid. She lay in my lap with the others around her and I felt as if she was struggling to stay with us. It is the hardest thing in the world to tell your child that it is OK for them to leave you but that is what I did. “The children are waiting to play with you and you can go to them now,” I told her. There had been enough suffering and we all kissed her as she finally let go.

Isabella died on 29th April 2016 at the age of five. It was very touching that, as the funeral procession passed school, the teachers were standing by the fence and her classmates were in the playground, calling out “Here’s Isabella” and waving. The school was wonderfully supportive throughout Isabella’s illness and since. She is remembered with a special picture on the wall and everyone there takes part in Wear A Hat Day each year in her memory.

Rebecca and Sophia had been collecting pin badges which are produced by the charity Brain Tumour Research each year and we were overwhelmed to be told that the designs they came up with at school and sent in were going to be manufactured and sold in order to help fund a cure.

This is such a lovely thing for us all and a wonderful way to remember Isabella who remains a part of our family and will never, ever be forgotten. I don’t feel angry about what happened but I do feel a great sense of sadness that Isabella didn’t get the chance to grow up. I will be forever grateful for the doctor’s honesty which allowed me to accept that sometimes you have to settle for quality of life rather than quantity, and this allowed me to ensure we gave her the best life possible.

If you have been inspired by Isabella’s story, you may like to make a donation to Brain Tumour Research via JustGiving please quote “Isabella Coomber” or leave a gift in your will via www.braintumourresearch.org/legacy 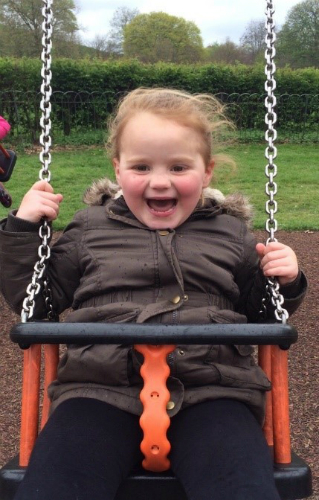