Former fireman and pub landlord Ian Walsh was taken ill at Christmas and, within a month, he was diagnosed with a high-grade glioblastoma multiforme (GBM) brain tumour. He passed away in August 2015, just four months after marrying his “soul mate” and long-term partner Glenda.

“The doctors tried to ensure he had the best quality of life for as long as possible. The day we got married was a bitter sweet occasion; you marry someone for life and I now realise we should have done it years ago. We had been together for a long time and kept putting it off, saying next year ...”

His wife Glenda tells his story …

Ian and I met at the pub. It was 2005. I was working at The Roebuck Inn which is at the end of our street in Rishton, Lancashire, and Ian was a customer. We both liked karaoke and we became friends, getting together when I moved to another job. I loved his Scouse accent and his cheeky one-liners; he was one of those people who lights up a room. The Roebuck came up to let and Ian took on the tenancy. After two years, he was offered another job which he took and 11 months after that I went back to the pub as manager. I had worked there as a teenager and my mum had worked there too so that pub has been an important part of our lives.

Just before Christmas 2014 I was poorly with a bug. It lasted four or five days and I was suffering from aching eyes and a fever as well as sickness and diarrhoea. I was feeling better when I noticed that Ian had similar symptoms and was also complaining of a headache. His went on for three weeks and I said: “something’s not right here.” He was also sleeping a lot and not eating. Following a visit to our GP he was prescribed tablets for vertigo. I remember coming home early on Monday 19th January and Ian was unwell and went back to bed. He was repeatedly vomiting and I decided I would take him to hospital the next day if it continued. We went to the local A&E where they wanted to give him a chest x-ray but I told them I was concerned about his head and we were sent to the Royal Hospital near Blackburn. They ran some blood tests and co-ordination tests such as putting finger and thumb together. By this time, Ian couldn’t do what they were asking and didn’t know what day or month it was.

The doctor said it was clear there were all sorts of things going wrong and he was sent for a CT scan. Ten minutes after that took place he had an MRI scan and we went back to the assessment ward to be told that a large mass had been found on his brain but, at that stage, they didn’t know what it was. When we were told the news I felt numb. It was surreal and as if I was dreaming. I thought OK, if he has got cancer he hardly drinks and he doesn’t smoke, he’s active, fit and strong, so surely he can be cured. It was impossible to take the news in.

We were sent in an emergency ambulance to the neurological unit at Royal Preston Hospital. Ian had to be sedated as he was very distressed and agitated. A biopsy took place the following day but we had to wait an agonising 15 days for the result. Ian was allowed home for the weekend. We went back to hospital to be told his tumour was an aggressive high-grade glioblastoma multiforme. It was in the back of his brain, incurable and inoperable but it could be treated. On 2nd March, Ian started six weeks of radiotherapy, going to the Royal Preston five days a week, and also took the chemotherapy drug Temozolomide.

We did not know what the future held but the doctors tried to ensure he had the best quality of life for as long as possible.

We got married in hospital in April. It was a bitter sweet occasion; you marry someone for life and I now realise we should have done it years ago. We had been together for a long time and kept putting it off, saying: “next year” ... But there’s no point in looking back.

Ian was very brave and we had great support from our family, friends and neighbours. Between us, we have seven children. The eldest is 30 and the youngest, Toni, is 20 and still lives at home. Ian moved to Rishton from Liverpool, where he had been a fireman, ten years ago. Everybody thought the world of him, not because of what happened – they all loved him from the start.

Brain tumours kill more children and adults under the age of 40 than any other cancer ... yet just 1% of the national spend on cancer research is allocated to this devastating disease. This is unacceptable! 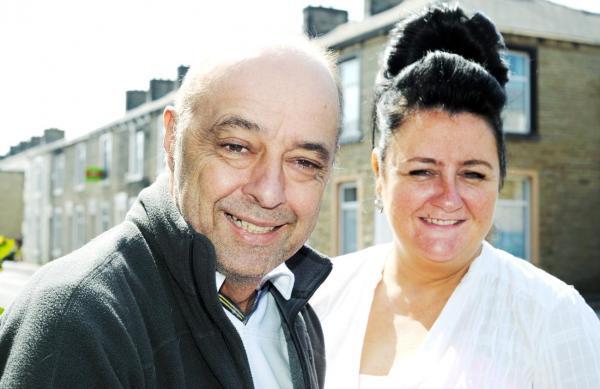