Ian and Karen got together later in life after Karen had been on her own for 10 years following the breakdown of her first marriage. They had 12 blissfully happy years and were looking forward to an early retirement, until Ian was diagnosed with three brain tumours.  He passed away just nine months later, aged 49.

Here is Ian’s story as told by his wife Karen …

Ian was caring, helpful, outgoing and energetic. He was always on the go, in fact he never stopped! He worked for Morrisons, while I worked up the road for Wilkinson, now rebranded as Wilko. We were well-known in our home town, particularly through all our customers.

“Ian and I met when he was out on a stag night. My friend had persuaded me to have an evening out – I had been on my own for ten years after my first marriage had broken down. Ian walked me home and asked to see me again. It was 24 June 2007.”

When I met him, I was working at the greyhound stadium three nights a week. Ian would come and pick me up from work. We were always together, holding hands. In August he asked if he could move in.

The following year, being a leap year, I proposed by writing on a banana which I put in his lunch pack, along with a ring. Happily, he said yes and we got married on 21 August 2010. We were the last couple to marry in the Gorleston registry office before it closed down.

For a couple of years, Ian suffered with headaches.

Then he forgot our wedding anniversary on 21 August 2017, which was very surprising. I thought he was having a mid-life crisis. 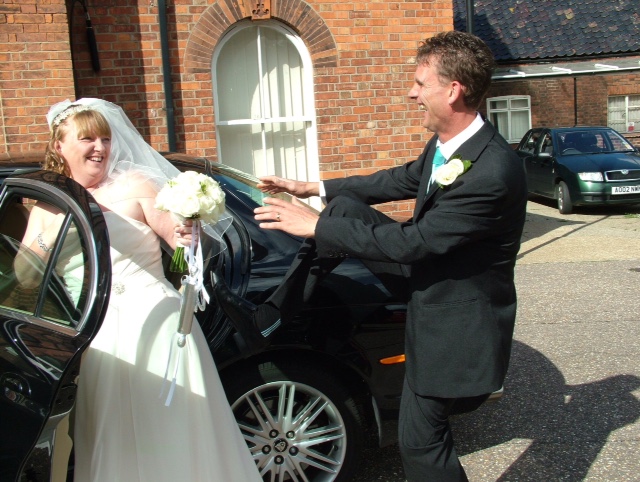 On 5 November, 2017, we were going to a firework display and for no apparent reason Ian hit a parked car. We called the police because we couldn’t find the owner of the car and then my dad came and took us home because our car wasn’t driveable.

Back home, I noticed that Ian was slurring his words and then he tripped over in the kitchen, cutting his head. He went by ambulance to hospital where it was thought that Ian might have suffered a stroke. A doctor and a nurse examined him and thought he was messing around as he wouldn’t look at them. I had to convince them that he wasn’t. They decided to send Ian for an MRI.  It was only then that they realised he hadn’t had a stroke; he had a brain tumour.

“I wanted the ground to open up. I just couldn’t take it in. I thought I was having a nightmare. It was so terrifying and on top of that we had to wait about two weeks for an appointment at Addenbrooke’s to find out what his diagnosis actually meant.”

Ian kept telling me everything would be fine, but I was absolutely shattered.

At Addenbrooke’s Ian had another scan and they told us they would try and remove as much of the tumour as possible, but it was a glioblastoma multiforme grade 4 (GBM). Even then Ian remained positive and kept saying it would be ok.

We were told Ian had three tumours. He had the largest one debulked and they managed to remove around 80%. The doctors didn’t tell him he was going to die, which I was grateful for. I wanted him to keep going and not just give up. He was still joking in the hospital, although he did have his grumpy days too.

Ian had some radiotherapy treatment, but we were told that chemotherapy wouldn’t help him.

In hospital, Ian kept doing random things like holding down his emergency button – I was scared they would take it away. The nurses would also tell me that he got angry when I wasn’t in the hospital with him. He developed OCD and was always looking to make sure everything was really clean. This led to him flooding the hospital sinks a couple of times. Ian even ran away one time and the police had to find him. 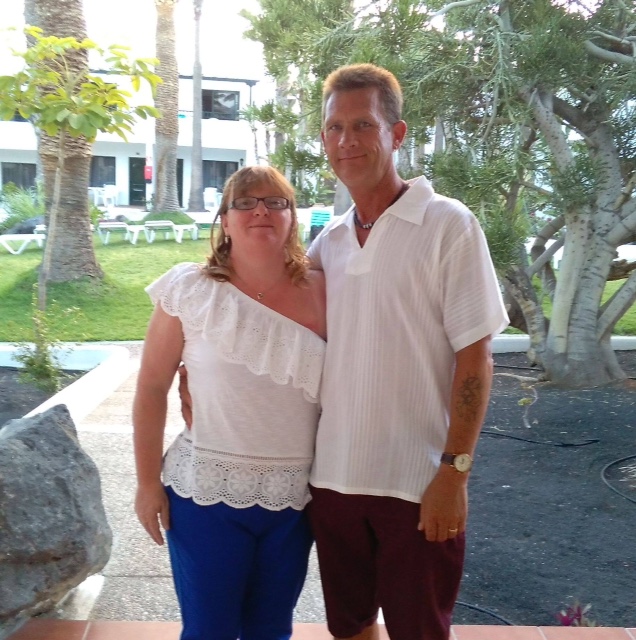 One day he made 20 beds along with the nurses and another day he lay on the floor ostensibly adjusting the walking frame belonging to the patient in the next bed. We had to let him do it otherwise he would get angry. On the other hand, he was also very kind, giving away his dressing gown and ear plugs to people he thought were needy or telling the nurses he was giving them all a pay rise.

People need to be aware that brain tumours can affect a patient’s personality. Ian turned from being a very caring person to someone who could, at times, be quite angry.

I took a career break from work and we went up to Scotland at the end of June to spend some time with his sister near Motherwell. She had suffered a brain haemorrhage, some years earlier, which had left her mentally and physically disabled.

Back home, life continued with the help of occupational help. Ian started telling anyone who would listen that we were getting a 40ft yacht with a hot tub. He kept telling us it was coming and even the nurses and people he met on the street.

On a Friday, Andrew, his carer, would take him to Cherry Lane Garden Centre while I had a three-hour break. Ian would also go to Headway, a charity which helps people with brain injuries, where, among other things, he made a bird-house to give to my dad on Father’s Day.

We had trips out and went to Southwold for fish and chips; we wanted to go to Cromer for crab, but sadly didn’t manage to tick that one off our list. Ian had lost the ability to walk and was in a wheelchair, but we still managed to get out and about and in early July we went to a car boot sale and to a firework display. 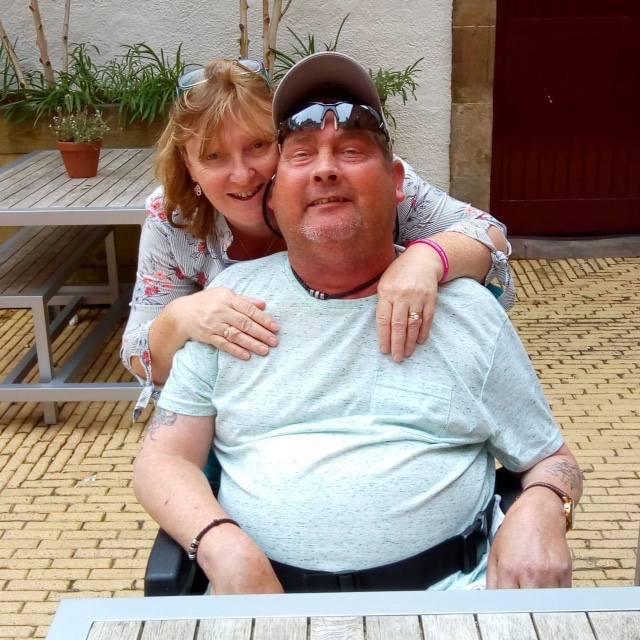 Then towards the end of July 2018, Ian contracted pneumonia and we were told that he wouldn’t be getting better. We had to put him into the care home where my sister works. They were able to give him a room with two beds put together so that I could stay with him.

Sadly, Ian quickly deteriorated and, although initially he didn’t want to be admitted to hospital, he eventually agreed. He stopped talking and was given a syringe driver for his pain.

“I was with him every day, looking after him, giving him his meals and helping him shower, although sadly I couldn’t stay with him at night. Then one of the doctors openly said in front of him that he wouldn’t survive the week.”

I left Ian’s bedside to go and speak to someone about palliative care. Two minutes later, with just my two sisters beside him, he passed away. It was 7 August 2018 and Ian was three months short of his 50th birthday. He had survived nine months from diagnosis, outliving the doctors’ prediction of six months. But I am still wondering why Ian waited for me to leave his bedside to die.

At home I found he had already made me a card for our wedding anniversary on 21 August and for weeks after, I kept finding white feathers and my mum and dad keep having a robin come into their garden. They call it Ian.

So many people came to Ian’s funeral, which was held just days after our wedding anniversary on 29 August. Among the songs we had, were Take That’s Rule the World and In the Arms of an Angel by Sarah McLachlan.

And having always promised Ian that I would get a tattoo – he had several – I have recently had one done for Ian: some feathers with a bird coming out of them.

We had always talked of retiring early and doing much more travelling. We were planning on buying another touring caravan; in our last one we travelled to places like Lake Windermere, the Peak District, Devon and Yorkshire and sometimes just a spontaneous weekend locally to somewhere like Beccles in Norfolk where Ian could also pursue his love of fishing. I couldn’t go caravanning now by myself as I wouldn’t want to tow a caravan. Ian always did the towing. 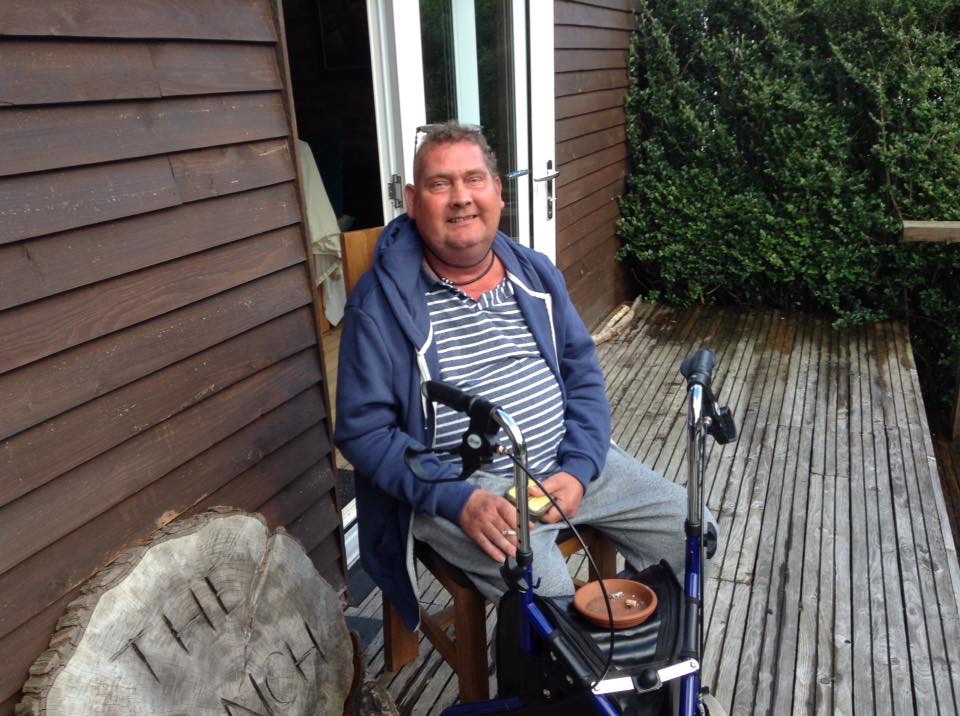 “I never thought Ian’s deterioration would be so tough. He changed so much visually and it was very hard that people we knew would walk past us in the street, no longer stopping to say hello.”

I suppose they were embarrassed and didn’t know what to say, but they still came to his funeral.

I was more than happy to care for him and wish I was caring for him still, but I never anticipated he would undergo such enormous personality changes. However, I do know that was the tumour and not Ian.

Sadly, some of the nursing staff we encountered seemed ignorant of the fact that brain tumours can drastically affect a person’s personality and, for example, got angry with him even in the last week of his life when he failed to use the emergency button to have his toileting needs addressed. However, I am sure he didn’t understand anymore what the emergency button was for. The fact that he was robbed of his dignity in this way continues to haunt me.

I am determined to continue raising awareness of this cruel disease. 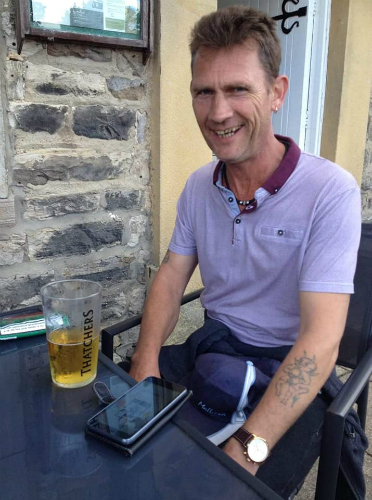