We are grateful to Holly who worked with us in February 2010 to share her story here. Sadly, she passed away on 18th December 2017. We remember Holly as we continue our work to raise awareness of this devastating disease and to fund research to help find a cure. She will be forever in our hearts.

Holly had a headache which wouldn't go away.  An MRI scan revealed a brain tumour in a very inaccessible place.  Now she is a teenager trying to live a normal life in between 3 monthly scans.
Holly’s symptoms started during the May bank holiday in 2009 when we were at my mum’s house and Holly mentioned she had a headache.  We thought this was nothing unusual for a teenager.  On the following Friday, Holly talked again about having a headache and that she had had it all week.  Then on the Sunday Holly was sick, so I thought it was time to go to the doctors.  The GP put it down to teenage hormones or sinuses.

Holly’s headache continued the next week and again on Sunday she was sick, which I thought might be down to the fact she went to her trampoline club on a Saturday.

Nevertheless, we booked again to see the GP who thought Holly should go to the Outpatients Assessment centre at our local hospital for tests.

Staff there were not unduly alarmed and asked what tablets we had given Holly, to which we answered “not much”.  It was suggested that we give her regular paracetamol and ibuprofen to zap it. I kept Holly off school too so that she could be fully rested.

Nothing changed so we went back to Outpatients and saw someone else who asked us whether we were worried and said they would try and get a CAT scan organised.

Amazingly, a scan came through for the next day – so quick, compared to the waiting most people experience.  The scan showed up something they didn’t like, but I still felt everything would be fine… That it would be something like hormones and that we would be home later.

The Paediatric Consultant came to tell us that they were waiting to be able to give Holly an MRI scan.  This happened the same day and a brain tumour was confirmed…  The diagnosis was totally out of the blue and rocked me totally.  It was the last thing I expected them to say.

Holly then had an operation to perform a biopsy and to have a drain inserted.  Unfortunately, the biopsy proved to be inconclusive and the drain became infected two weeks later.  Holly really went downhill with headaches and sickness again, ending up back in hospital.  The drain was removed and an open craniotomy performed.  The second biopsy was also inconclusive.

It is a real worry not knowing the grading of the tumour, which we have been told is an Astrocytoma on the hypothalamus.  The oncologists say it is probably a grade II or III.

Holly has to go for scans every three months so we live life between scans.  In November we had good news – no change in the tumour – so we had a Happy Christmas, but now we are building up for what the next one in February will tell us.

Holly seems very healthy at the moment with no headaches (maybe because the drain released the fluids which had been building up).  She leads a more or less normal life – the team at Cardiff University Hospital, whom she is under, have said Holly can do anything she did before the diagnosis.

She does, however, get really tired, which Holly finds frustrating as she often has to turn down invitations to parties and sleep-overs.

Holly goes to school as normal, although with a slightly reduced timetable to make things a bit easier for her.  She has stopped trampolining, because we are petrified that the bouncing around wouldn’t be good for her, but she is continuing with her swimming.  For the last two years in March, Holly has taken part in the Marie Curie Swimathon (totally unaware then of her own condition) and got her swimming club involved as well.  Now she is slowly building her stamina back up, as she cannot do the lengths she was able to do previously.

Holly doesn’t ask about her brain tumour, but I suppose having no symptoms makes it a lot easier for her.

It’s only since Holly’s diagnosis that I have become aware of the real lack of funding for brain tumour research – less than one percent of all cancer research funding.  We don’t know what causes brain tumours so we don’t know how to prevent them.  The cures are very limited so the need for more research is paramount.

If, over the next 10 years, funding is greatly increased, they may be able to cure Holly before the tumour does any damage. 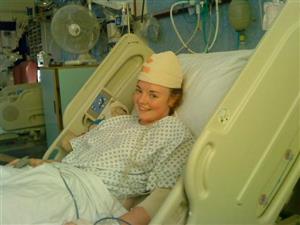