Graham Addison was a larger-than-life character at the heart of a tight-knit family. His brain tumour diagnosis in 2015 was a terrible blow to his wife, five children and nine grandchildren, but the family remained positive as Graham responded well to surgery, radiotherapy and chemotherapy. However, after a second operation Graham deteriorated rapidly and the love and support of his family couldn’t halt the aggressive glioblastoma multiforme (GBM). He passed way in September 2016, aged 66.

“Dad came out of theatre a different man and, for the first time, he was noticeably in decline. He couldn’t remember his own date of birth or even what day of the week it was. He was so brave but I remember once seeing the fear in his eyes when it dawned on him that his brain was failing him. How scary it must have been for him – to go from such a bright and intelligent man to someone who could no long remember how to use his mobile phone.”

Here is Graham’s story, as told by his daughter Suzie…

Looking back, there weren’t any symptoms that suggested Dad could be unwell. He felt well within himself and, aged 65, he led a really active and healthy life. He had retired after 37 years as a stockbroker but he kept himself busy socialising, playing tennis and going to watch cricket. He had been having a few spatial awareness issues but they were so insignificant that I’m only thinking of that now in hindsight.

What led him to go to the GP was actually a glass of beer. Mum and Dad had been at a family party in the summer of 2015 and my sister’s brother-in-law, a doctor, noticed that Dad was holding his beer in a tilted position. He asked Dad to hold his arms out in front of him with his eyes closed and, unbeknown to Dad, one of his arms dropped down – he said Dad needed to go for some tests as soon as possible.

Dad was referred to a neurologist who initially thought he had some kind of nerve issue but scans found a tumour in his brain, and it was a glioblastoma multiforme (GBM). It’s disturbing to think that such an aggressive tumour was growing and Dad had no idea.

We’re a close family, I’m one of five and Dad had nine grandchildren at the time – he has another granddaughter now who he sadly never got to meet – so the news hit us hard. My mum, Althea, was devastated when she found out Dad had a brain tumour but she was incredibly strong throughout Dad’s illness and focused on getting him through what was to come. Dad just accepted the news. He was a calm and rational man, so much so that he was the one comforting the rest of us after his diagnosis. As always, he was the glue holding our big sprawling family altogether.

We were relieved to find out that the tumour was operable and within no time, Dad was in theatre. The surgery went as well as could be expected and radiotherapy and chemotherapy were the next hurdles to overcome.

Dad responded well to treatment although he was very tired and less active. He had to stop playing tennis and could no longer travel. He also got diabetes. I think one of the hardest things for him was losing his driving licence. He had always enjoyed driving, whether it was picking us up from school when we were young or giving one of us a lift to the airport. Even a few weeks before he died, he said he was looking forward to the day he could drive again.

It wasn’t until the following year that the disease made its devastating impact. Dad’s chemo had ended and his neurologist suggested he have a second operation to debulk the tumour. We trusted the advice and Dad went ahead with the surgery in the summer of 2016.

Dad came out of theatre a different man and, for the first time, he was noticeably in decline. He couldn’t remember his own date of birth or even what day of the week it was. He was so brave but I remember once seeing the fear in his eyes when it dawned on him that his brain was failing him. How scary it must have been for him – to go from such a bright and intelligent man to someone who could no long remember how to use his mobile phone. Physically, he was becoming weaker too and relying more on my mum.

In September 2016, I was in Cyprus for a wedding and had a call from home telling me to come back as soon as possible. I thought they were being over-cautious; I’d seen Dad just a week before and he seemed relatively ok so I couldn’t understand how he could have declined so quickly. Waiting in the airport for the next flight home was one of the worst experiences of my life as it dawned on me how serious things must have been. I couldn’t comprehend what was waiting for me when I landed.

Back at home, Dad had lost all mobility and was increasingly confused. Mum had had to move him to a hospital bed in the lounge and call in help from the local hospice. Seeing how my once larger-than-life Dad had deteriorated was devastating. It was all so sudden.

Mum kept caring for him at home but she needed help so, between the five of us children, we took it in turns to stay over and give her the chance to rest for a few hours. We carried on like this for a couple of weeks but it became impossible to make Dad comfortable at home. He was in agony and there was nothing we could do to help.

It was a Thursday when Dad moved into our local hospice, St Catherine’s, and I took the Friday off work to go and see him. He’d deteriorated again and could no longer speak. The hospice warned that we only had a few days left with him but sadly they had overestimated and Saturday 24 September 2016 was Dad’s last day. We were all there by his bedside as he took his last breath and although it wasn’t a peaceful end, I find some consolation in the knowledge that Dad was surrounded by so much love.

Although our family had known people who had died from brain tumours, nothing could have prepared us for these 13 months and the grief that followed. Dad was the heart of the family and this cruel disease took him away from us. Each of us handled his death differently and we’re still finding our own ways of coping. Last year, we had the idea that we should all run the London Marathon in Dad’s memory – my brothers Stuart, Ben and Anthony, my sister Jenny, my fiancé Humphrey and me. Between us we want to raise £20,000 and help fund research into better treatments and, ultimately, a cure. I hope anyone reading Dad’s story will be inspired to support us and the thousands of others devastated by this disease.

If you have been inspired by Graham’s story, you may like to make a donation via https://www.justgiving.com/fundraising/remembering-Graham or leave a gift in your will via www.braintumourresearch.org/legacy 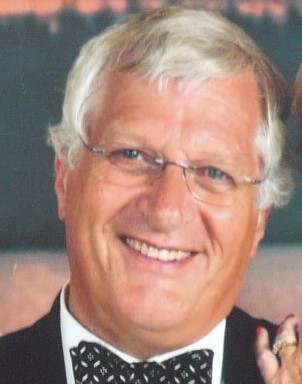