Husband, step-father and grandfather, Godfrey was laid to rest on what would have been his 25th wedding anniversary. His widow Shirley chose music from their marriage ceremony for the funeral which took place near their home on the Isle of Wight. Godfrey was 71 when he passed away just ten weeks after being diagnosed with a glioblastoma multiforme (GBM) brain tumour.

“A proud man, Godfrey didn’t want lots of visitors or people fussing around him. He was thinking of others and wanted to spare them the pain of seeing what was happening to him. Close family came and it was a joy to see the love in his eyes as our granddaughter, who was just a few months old, sat on the bed with him.”
Godfrey’s story is told by his wife Shirley:

Godfrey and I considered ourselves lucky to have found each other. We were both divorced and I had an eight-year-old daughter when, by chance, we were introduced at a club on the Isle of Wight where we both lived.

It’s funny as I’d already spotted him on several occasions as he drove past the bus stop as I waited to get into work in the mornings. It was one of my brothers who introduced us and we hit it off straight away, marrying three years later. He died just ten days short of our silver wedding and was laid to rest on our anniversary.

The funeral service included two hymns which we had at our wedding – it was comforting for me on this very sad day when, by rights, we should have been celebrating together on a wonderful holiday. We had decided to treat ourselves and had plans to fly to Australia and then board a cruise ship to New Zealand. Godfrey was taken ill on the day we had planned to book the trip.

We were at home on 28th March 2016 when Godfrey had a seizure and fell down the stairs. It was such a horrible thing to witness and I still have flashbacks. His face turned purple and he was foaming at the mouth and making such awful noises. An ambulance took him to St Mary’s Hospital at Newport where we were told they had found something in Godfrey’s head. No-one mentioned anything about a brain tumour and he was put on a high dose of steroids in the hope of shrinking the mass which could have been a brain bleed caused by the fall.

The next step was a scan and biopsy at Southampton General Hospital and, it was mid-May when we were given the dreadful news that Godfrey had a glioblastoma multiforme (GBM), a malignant and aggressive brain tumour. It was such a shock. The doctors said they could not operate. There were actually three separate tumours and the size and location meant that surgery would do more harm than good.

The prognosis was poor; without treatment Godfrey had only a matter of weeks but chemotherapy could give us a year. Treatment started but Godfrey was knocked sideways. He was exhausted and seemed to have no energy whatsoever and he lay on the bed all the time.

By the time we were due in Southampton again for our next appointment Godfrey was far too weak to make the journey, even in an ambulance. It was decided that his condition was so poor that the treatment would stop and my husband’s words to me were “thank you so much.” He just couldn’t take it any more.

Godfrey spent his last weeks at home. In the end, he was confined to bed but would insist on feeding himself even though he was very weak and had lost the use of his right side. We had carers in to help and were so grateful when thoughtful friends and neighbours would leave a bottle of wine or some freshly-dug new potatoes on our doorstep.

A proud man, Godfrey didn’t want lots of visitors or people fussing around him. He was thinking of others and wanted to spare them the pain of seeing what was happening to him. Close family came and it was a joy to see the love in his eyes as our granddaughter, who was just a few months old, sat on the bed with him. His step-daughter Leanne, my daughter has been wonderful throughout this whole episode. She often would sit and chat with Godfrey during his illness.  Unbeknown to me they arranged for a bouquet of flowers to be delivered to me on my silver wedding anniversary day as Godfrey had always sent me flowers on our anniversary. It was handy that my daughter is a florist and owns her own business.

We talked a little about what would happen when he was gone and Godfrey knew I was a strong person and would get through it, but it hasn’t been easy. I try to keep myself busy and have been volunteering at Northwood House here on the Island and am also helping with admin work at Cruse Bereavement Care which supported me when I lost my mother three years ago.

Godfrey’s diagnosis seemed even more cruel as the family had previously suffered losses to brain tumours. My brother’s wife, Charlotte Venables, lost both of her parents, Mike and Jenny Parry to GBM and, like me, she is a great supporter of the charity Brain Tumour Research. 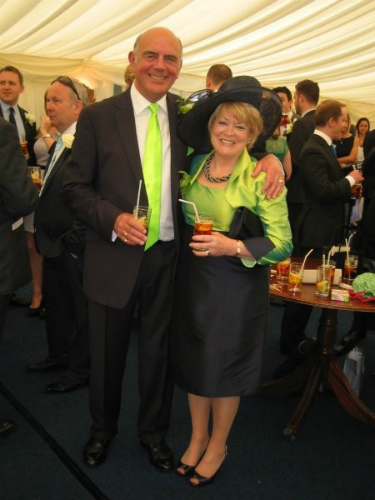