We are grateful to Glendon who worked with us in May 2017 to share his story here. Sadly, he passed away on 12th October 2017. We remember Glendon as we continue our work to raise awareness of this devastating disease and to fund research to help find a cure. He will be forever in our hearts.

Glendon Snape was looking forward to starting his honeymoon when he was struck with a terrible headache during the journey. Never setting foot in the hotel, Glendon, 51 from Preston, was instead rushed into hospital by ambulance from the hotel car park. The newly-weds, with four children between them, were devastated to hear that Glendon had a grade four glioblastoma multiforme, with possibly just months to live.

“When the doctors told me I had 14 months to live, my heart just sank and knowing more became an obsession; I just had to try to find a way out of the nightmare... It’s like an addiction but it’s kept me alive.”

13 months ago, I was the luckiest man alive: getting married to the love of my life, with our four fantastic children around us. Now I’m sitting in a wheelchair, facing my third surgery, having been through months of gruelling and experimental treatments and repeatedly hearing I may only have months to live. Sometimes it feels like death by a thousand cuts.

After meeting ten years ago, I married the love of my life, Kate, in January 2016. We have four children between us, the eldest is only 20, and I was happy in my job as a sales and marketing director. Everything was going well.

We had planned a minibreak a few weeks after the wedding, a trip to north Wales, and it was on the drive down from our home in Preston when I first started feeling odd. I had a terrible headache and a strange feeling of déjà vu. Kate took over the driving after I took us down a one-way street and by the time we reached the hotel, I collapsed. The ambulance picked us up from the hotel car park, we never even checked in, and I just remember waking up in hospital. A scan revealed the tumour and I had surgery a week later.

I knew nothing about brain tumours before my diagnosis, but once we had been told the news, I began frantically researching everything I could find. I remember thinking as long as it’s not a glioblastoma multiforme (GBM), it might turn out fine… then they identified that was indeed what it was. As I became more of a reluctant expert, I said to myself: as long as I have a favourable MGMT status then I might be okay… unfortunately I don’t.

When the doctors told me I had 14 months to live, my heart just sank and knowing more became an obsession; I just had to try to find a way out of the nightmare. I would wake up at 5am and spend all day, sometimes 24 hours at a time, at the computer desperately searching for information. With a GBM, you need hope or you’ll be crushed. It’s like an addiction but it’s kept me alive. If you want to get better, then you have to do your research, it’s down to you. No-one will hand you a cure.

After my first surgery in March 2016, I had chemotherapy and radiotherapy, starting a regime of three-monthly MRI scans to monitor the progress of the tumour. With such an aggressive form of cancer, three months seems too long to wait to know what’s working. I had another operation in January 2017, to remove more of the tumour, and that was when I really took control of my own treatment. I was told that I couldn’t risk another surgery after the second one as the risk of being left with “deficiencies” was too great.

I could no longer move my left side and they were out of options, I felt like the doctors were giving up on me. It was like having a gun to my head: pay up and go private or die in three months. I had heard about experimental new treatments during my months of research, so decided that this had to be the time to just try anything I could. I sold my mother’s house, cashed in my life insurance and pension (my company had already arranged a minimum leaving package for me six months after my diagnosis, after 23 years with them) and threw everything I had at my disease.

I’m now only weeks away from my possible life expectancy, as my doctors had initially warned me. The last year has been one endless period of worsening scans, horrible treatments and ongoing pain. I am desperate for respite, for six months where my tumour would just stay stable and not grow. That would be a lifetime for me. The treatments available on the NHS are so out-dated, there’s been no significant improvements in 30 years. How can they save anyone?

I started off seeing an amazing oncologist, Wolfgang Wick, in Heidelberg in Germany. One of his first questions to me was: “where’s your Novocure Optune?” He told me that without this innovative new treatment, a kind of wearable skull cap using electric fields to treat brain tumours, I had virtually no chance of survival. He immediately wrote to the company, who gave me one for free; they are such a humane organisation. It’s very unusual in private cancer care to come across anyone who offers anything without charging. Sometimes I feel that trying to beat cancer is like being asset-stripped by pharmaceutical companies.

You have to wear it almost all of the time, but the Optune seemed to help with the pain. I slept like a baby for the first time in months. Unfortunately, a few months on and the tumour is still growing, but I still wear it just in case it is having a retardant effect. It’s like a safety blanket for me. Immunology was the next thing on my list to explore and I came across Matt Williams at Imperial, who is the best in the UK. I chose to have another resection, despite the earlier doctor’s warnings, to get as much of the tumour out as possible. Next will come experimental immunotherapy privately, wrapped around a course of NHS radiotherapy which starts on my birthday. I also got genetic testing done to inform my treatments.

Two months ago we thought it might be all over. I was unconscious for four days and they started end-of-life care with me at home. The kids were scared they were losing their dad but I came around again. I don’t want to die. I’m fighting to stay with Kate and the children. I want to give others hope; patients and families need to hear there’s hope!
I have spent tens of thousands of pounds on treatments - it will probably run into six figures - and travelled all over Europe to see specialists. We are clinging to the hope that the current plan will work as the next lot of options, which would have to be done privately, are frighteningly expensive. This is all just buying me time with my family and hopefully slowing the tumour growth. I know the tumour will probably come back, but maybe everything I’m making happen could actually cure me. You never know, it might just kill it off.

Every day I wake up and then remember what I’m facing. It’s exhausting. Yet I know I am blessed, with my children and my wife. Kate completes me, I can’t give up on her. I have to carry on fighting. We still need a proper honeymoon!

If you have been inspired by Glendon’s story, you may like to make a donation via https://www.justgiving.com/braintr or leave a gift in your will via https://www.braintumourresearch.org/legacy 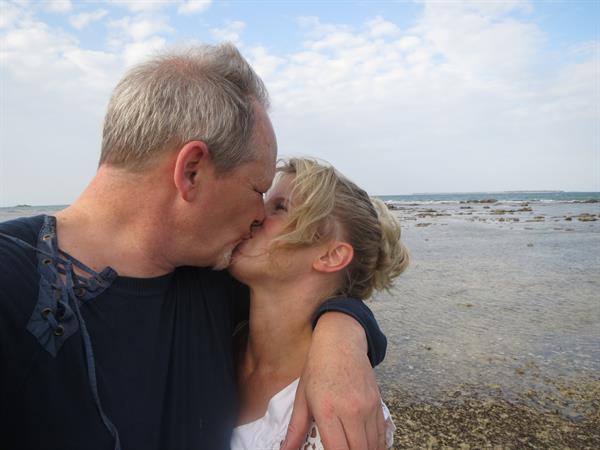