Georgie Beadman wife, mother, daughter, and sister, died seven years after being diagnosed with a low- grade glioma. She was a talented potter who loved music and the arts. In February 2015, Georgie died at the age of 41 leaving a husband and two small children.

“It is desperately sad to think that brain tumours kill more children and adults under the age of 40 than any other cancer and I was shocked to learn this area receives just 1% of the national spend on cancer research. A number of the girls who Georgie met during her year as a debutante are now involved in fundraising to support vital research into brain tumours which is wonderful. We were unable to help Georgie but I am sure that we can help others.”

Georgina was a lovely child and grew up to be very caring, always more concerned with other people than herself. She was a joy to be with and remained so until she died in a hospice in February 2015 at the age of 41, leaving two sisters, and a husband and two children aged 12 and nine.

Georgie was the youngest of my three daughters and a sister to Julia and Susannah. She was born at Queen Charlotte’s Hospital and grew up in Notting Hill Gate. We had suffered a family tragedy when, as a baby, Susannah was left with brain damage after a severe bout of influenza. After this sadness Georgie brought us new joy. She attended Queen’s Gate School in South Kensington which is where her talent for music was discovered. She then went as a boarder to Westonbirt School in Gloucestershire.

In 1992 Georgie was a debutante and was featured, among others, in Tatler magazine, Country Life, Hello, the New York Times and the Daily Express. I kept an album of all those things which I treasure. I had been a debutante myself and she knew it was something I was keen for her to do. In a way I think she was a little embarrassed and worried what her university friends, many of whom came from wildly different backgrounds, would think. They found out by chance in the end and, if anything, it made them love her even more.

Georgie got her degree at Glasgow University and attended the Royal Scottish Academy of Music and Drama. She went on to study set design and worked on a number of productions for London theatres. After that she found her way into website design and worked for some time with Tricia Guild as Project Manager of Designers Guild, which is where she discovered her joy of design and love for pottery. She went on to be a potter and her last exhibition, in October 2014 in London, was a sell-out and a great showcase for her formidable talent.

She had met Cristian in Edinburgh and they were married in 2000. For a while they lived in Chilworth and then moved to Shrivenham. Cristian was working at Christie’s and then Dreweatts, the fine art auctioneers, and now appears on the BBC’s Antiques Roadshow. Everything was going along swimmingly until March 2008 when Georgie woke up in the night to find she had no sensation in the right hand side of her body. She was also suffering from terrible headaches. Her sister Julia and I both travelled to be with her. Cristian managed to get her a GP appointment and from there she was sent to hospital in Swindon.

While she was there she was tearful and she felt out of control which was so unlike her. An ECG reading showed nothing other than her heart was beating slightly too fast. She was unable to have an MRI on that occasion as the machine wasn’t working.

At the end of the week she was taken ill while on her way to a wedding in Oxford and eventually had an MRI scan on the Monday. Within days she saw a consultant who told her there was an abnormality in her brain. It was a low- grade glioma, around 4cm x 6cm, the size of a walnut. The tumour was inoperable and she was told that at some point it would become intermediate or high- grade but it wasn’t possible to say when that would happen.

At the time, Georgie’s children were so little. Alfred was five and Jemima was just three. Georgie told me straight away but in such a positive way that at first I didn’t realise the enormity of the situation.

I remained optimistic that something would come along to help my daughter. As Mayoress of the Royal Borough of Kensington and Chelsea I was able to persuade my great friend the Mayor, Christopher Buckmaster to nominate Brain Tumour Research Campaign, a member of the national charity Brain Tumour Research, for his Mayoral appeal. His Magic Wand appeal raised £250,000 to provide a high-tech neurosurgery SonoWand for Imperial College Healthcare NHS Trust’s Charing Cross Hospital.

Very few people knew that Georgie was the inspiration for that appeal. Cristian, Julia and I feel so strongly now that her life must not have been in vain and think how wonderful it is that we can help others. We must do all we can to prevent anyone else going through the suffering which Georgie endured.

There was a period of two or three years when things were quite good but Georgie became ill once more and the only answer was surgery. She pulled through and the first tumour was halted for a short while and then returned, requiring more surgery.

Her wonderful surgeon Joan Grieve at the National Hospital, Queen’s Square, managed to remove more of the tumour and Georgie also had radiotherapy.

Georgie’s only thought was that she would not be able to help her friends as she had been used to, she never once complained about her illness and was always hopeful and cheerful.

Nearly six years later we heard the devastating news that she had a major tumour at the back of her head. Surgery was no longer an option and by the time we approached Christmas 2014 she was desperately ill and was brought up to Charing Cross Hospital, London, under the care of Matt Williams who did everything he could to help. She went slowly downhill and was moved to Prospect Hospice at Wroughton near Swindon where she was beautifully cared for.

We were all with her near the end and it was lovely to see her finally reaching a point of peace. Her friends had put up lots of decorations around her bed and, as Georgie lost consciousness, a string of dragonfly fairy lights came on. It was extraordinary, they were not plugged in but they flickered into life – we all saw it.

Cristian saw to it that Georgie’s funeral was an uplifting occasion. He gave a very moving eulogy in which he talked of her beautiful character, her kindness and generosity of spirit. The children both took part in the service too. Jemima read the poem My Angel, My Muse by Christie Hughes and Alfred played an extract from Schubert’s quintet The Trout on his viola. Georgie’s sister Julia wrote a moving story to help us all through our grief.

It is desperately sad to think that brain tumours kill more children and adults under the age of 40 than any other cancer and I was shocked to learn this area receives just 1% of the national spend on cancer research. A number of the girls who Georgie met during her year as a debutante are now involved in fundraising to support vital research into brain tumours which is wonderful. We were unable to help Georgie but I am sure that we can help, and hopefully save, others. 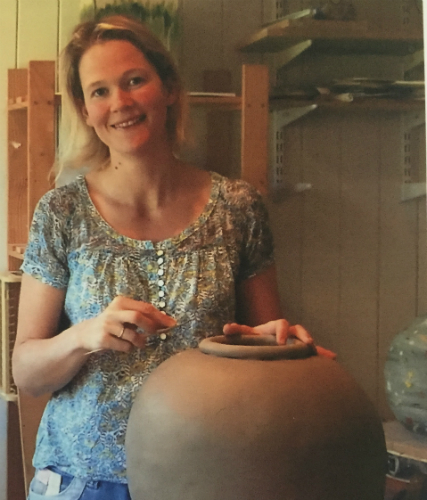