George was diagnosed with a brain tumour at the age of 25. He underwent surgery and married his childhood sweetheart Georgina 13 months later. Sadly his tumour returned five years later. He had radiotherapy and chemotherapy which left him partially paralysed with double vision and memory problems along with other side effects. Together with Georgina, George’s mum Sondra cared for him during his last months. He passed away with them and his sisters by his side in June 2010.

My son George Michael Harrison was destined to be famous. He was just seven when his class teacher constantly sang Beatles songs for him after his namesake. George got so fed of up of it that he declared: “From now on I’m going to use my middle name and be called George Michael.” Within six months, Wham! Had their first number one hit. Sadly, he never achieved fame as he died at the age of 32 as the result of a brain tumour.

George was born in Boston, Lincolnshire. In 1981, along with his sister Charlie, we moved to Bath in Somerset. Five years later we were on the move again, this time to Radstock in north east Somerset where his sister Abbie was born.

In 2003 when he was 25, George suffered his first epileptic seizure and collapsed at Comet in Longwell Green, Bristol, where he worked as a personnel manager. He was taken to Frenchay Hospital in Bristol where he was diagnosed with a brain tumour. He needed urgent surgery to remove it and was operated on within three days.

After the operation, George recovered well. We were elated to learn that the tumour was low-grade, although it had not been possible to remove it all. After surgery, we noticed that George seemed to lose his spatial awareness and his mental state was up and down. He was angry that he couldn’t go out with his mates or drive his car, yet he was also scared to go out alone. After undergoing some counselling, George’s condition improved and he was able to go back to work full-time. On a very happy day in September 2004, 13 months after the operation, George married his childhood sweetheart Georgina. They had met when they were 16 and it was love at first sight.  After they married they bought a house and lived very happily in Peasedown St John, Somerset.

Things were going well when, five years later, in December 2008, George became unwell once more. He went to hospital for a scan which showed the tumour had started to regrow. George was philosophical about the situation and trusted his surgeon to put it right as he had done before. But sadly, this didn’t happen. The operation revealed the tumour was no longer low-grade but had mutated. It was identified as a primitive neuroectodermal tumour (PNET).

This time we were told there was no cure. George underwent a course of radiotherapy followed by chemotherapy. He had part of his skull removed and developed double vision. The symptoms were as bad as they get. George was partially paralysed but still managed to sort out his finances on his laptop. He made sure his monthly donations to charities such as Oxfam and Cancer Research were paid. George worked very hard and was the manager of Crown Trade Paints in Bath when he died. He was not ordinarily a brave person. He would not have climbed a mountain but the way he faced things and dealt with the day-to-day stuff showed bravery.

We were lucky enough to be able to look after George at home in the house he shared with Georgina. Carers from Dorothy House Hospice in Bath were on call should we need them. Georgina was able to continue to go to work each day and I stayed with my son to care for him and keep him company. I also prepared an evening meal that he and Georgina could share each day.

We were able to carry on with this routine for eight months and I feel so lucky that I was able to have this time with George.

Georgina, Charlie, Abbie and I were with George when he died early in the morning of 8th June 2010. We all know that one day we will feel relief for him but that day hasn’t come yet. We still feel he should be here especially when the sun shines and he should be able to enjoy it with us.

George was a legendary dancer and we are organising a “bop” in his memory to raise funds for Brain Tumour Research. Brain tumours kill more children and adults under the age of 40 than any other cancer … yet just 1% of the national spend on cancer research is allocated to this devastating disease. This is unacceptable!

Before George’s diagnosis, our family knew nothing about brain tumours yet so many other families are touched by them. When George was undergoing his radiotherapy in Bristol we met other young people going through the same thing. George became friendly with a 17-year-old and said to me: “It seems so unfair that such a young lad should be going through this.” Despite everything, George never complained about what he was going through and would try to encourage me about his illness; he had a great sense of humour and we laughed often.

We learned that even ordinary young men can react in an extraordinary way when affected by illness; we lost a special person on that June morning – as so many other families have. 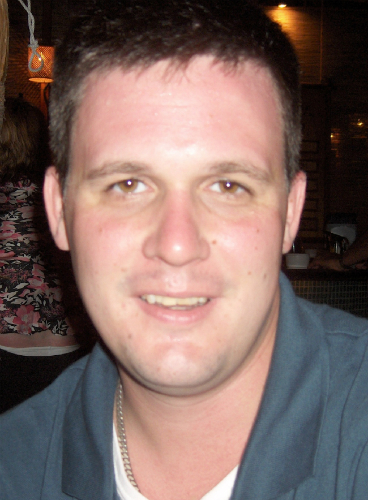