A former officer in the Metropolitan Police, Gaye Chaffe was diagnosed with an oligodendroglioma brain tumour in 1992. Her husband Simon supported her through two craniotomy procedures and subsequent treatment. The tumour spread to her brain stem and she passed away six years later in her husband’s arms, leaving two sons aged eight and three.

Her husband Simon tells her story …

I was 19 when I joined the Metropolitan Police in 1977 and in August, after completing training school, I started as a probationer at Marylebone police station in the West End of London. Gaye was on the same relief and we were colleagues for two years before romance blossomed. We were both sporty, she didn’t suffer fools gladly and we were like-minded in many ways. We were in a job where we were dealing with potentially dangerous situations and where you have to have trust in each other.

Gaye’s career moved on and she was stationed elsewhere. In 1982, she was on a hotel burglary squad at Paddington police station when terrorist bombs went off in Hyde Park and Regent’s Park. It was one of the worst IRA atrocities to hit the mainland, killing 11 soldiers and seven horses and injuring many more.

She was one of the first on the scene and was among those who rendered first aid where they could. Later that day she talked of the carnage she saw at the bandstand in Regent’s Park and described how she helped a man who was trying to crawl away after losing both legs. The episode had a massive psychological effect on her and, later, she was diagnosed with post traumatic stress disorder and was medically retired from the police.

Gaye retrained in travel and tourism and worked with luxury holiday company Kuoni for a while. We started a family and our first child, Christian, was born in 1989. My career in the Met progressed and I moved from Marylebone to South Norwood, doing a couple of stints at a training centre, at one time as an instructor in public order tactics, before promotion to sergeant and moving to Brixton.

Before Christian was born we had moved out to Wotton in Surrey and then to nearby Abinger Common where I still live now.

To my eternal dismay, Gaye liked to watch a soap opera. I can’t remember now if it was Neighbours or EastEnders but I can recall very clearly that, out of the blue, she pivoted on her chair and it was as if her eyes were following a fly around the room. She spun round and fell to the floor. The seizure was very disturbing to watch.

Our GP at the time, Dr Jepson, was supportive and instrumental in getting a scan for Gaye although the usual practice was that this was normally only available after a second episode such as she had experienced. This was how in 1992, when Gaye was 35, the tumour was discovered.

The neurosurgeon and author Henry Marsh CBE identified it as an oligodendroglioma. He explained to us that his methods were radical compared to others at the time and that his approach was to remove as much of the tumour as possible even if this meant causing a degree of collateral damage. Gaye underwent a craniotomy in which a panel of her skull was opened and the tumour, which was growing in the front left lobe of her brain, was removed. Initially, Gaye recovered well with few side effects. Her short term memory was not quite the same and, understandably, she had mood swings.

Anti-convulsants were prescribed and we had been warned that we should not try for another baby while she was taking the medication. During that time her driving licence was revoked which caused difficulties as we lived in an area with very little public transport but friends rallied round and we worked things out. Gaye had a small police pension which also helped.

She was anxious to come off the anti-convulsants and, when she did, she was able to drive again and conceived our second child. Immediately after Sebastian was born in September 1995 a scan showed there was another tumour. Dr Marsh performed another craniotomy and was hopeful that most had been removed. After this Gaye became a lot more vague and her mood swings were greater. The following year, another tumour was found.

Gaye was due to fly up to her sister in Newcastle on a short break and I took the boys down to Devon to visit my parents. I was with the children and my father at the Dartmouth Regatta when my mother took a phone call from the Royal Surrey County Hospital in Guildford to say Gaye had been admitted. Shortly before the taxi was due to pick her up and drive her to the airport for her trip, she had started having seizures. Somehow she had managed to dial 999. When help arrived, the paramedics had to break the door down to get to her. I drove straight back up to be with her and, eventually, they managed to get the seizures back under control.

Gaye stayed at the Royal Surrey for some time and was eventually transferred to the Royal Marsden. The tumour was growing quickly and spreading to her brain stem. We were told that it was imminently terminal and Gaye was moved into a palliative care unit. Everyone there was wonderful. I was on compassionate leave from work as Gaye slipped in and out of consciousness. I visited her daily and my parents abandoned their home to live with me and help look after the boys. I can remember quite clearly one occasion in September when the boys had both celebrated their birthdays and Gaye cried on my shoulder that she would not be alive to see another of their birthdays. I could only agree with her. Over the next few days she was unconscious for longer periods of time. There were swimming events on TV as it was the Commonwealth Games and I remember commentating as I thought Gaye might be able to hear me. During the late 1970s she had been a member of the Met Police off-shore lifesaving team so she would have been particularly interested in this. However, I noticed she was responding less than before. I called a member of staff and they warned me that she was approaching the end of her life.

I picked her up and held her as her mum had requested and Gaye passed away in my arms. One of the decisions that I had to make on her behalf was that her kidneys and corneas would be used for transplants. Like lots of ladies, she was conscious of her weight throughout her life; ironically she was too small for the skin from her back to be used in a transplant. The organs were harvested soon after she died and it has brought me some solace to think that three people were helped as a result.

We lost Gaye in September 1998; I am now remarried and Jayne and I have a 12-year-old son Emanuel. Jayne and I met in Covent Garden during December when I was at a police leaving do and she was at a Christmas party. In many ways I had done so much grieving before I lost Gaye that it didn’t seem too soon to be in another relationship.

I still don’t think that I was as good a father as I should have been to Christian and Sebastian after they lost their mum but I did my best. Sebastian was just three and his situation attracted much sympathy and attention. Looking back, I think Christian, who was eight, should have had more attention than he did. I remember once we were having a family discussion about the boys and the way people focused on Seb, and Christian remarked: “I lost my mum too you know.”  But they have made their way in life. Christian is 25, working in Nova Scotia, Canada, and has just moved into his first home with his partner. Sebastian, is 19 and training to be an officer in the Royal Marines.

Brain tumours kill more children and adults under the age of 40 than any other cancer ... yet just 1% of the national spend on cancer research is allocated to this devastating disease. This is unacceptable! There are so many illnesses that claim lives but people need to be more aware of how many young people are dying from brain tumours; after all it could be them or their family.

I retired from the police in July 2007 after more than 30 years and now work as a Countryside Ranger for the National Trust in East Hampshire. My time in the police was very closely linked with what happened to Gaye so, in many ways, it was good for me to get away.

We still don’t know what caused Gaye’s tumours. At one stage, she thought it was connected to growth hormones during pregnancy. She had also been assaulted a couple of times, on one occasion suffering a broken nose when a prisoner head-butted her and there is anecdotal evidence to say tumours could be linked to head trauma. The truth is that no-one knows what causes brain tumours which is why research is so vital. 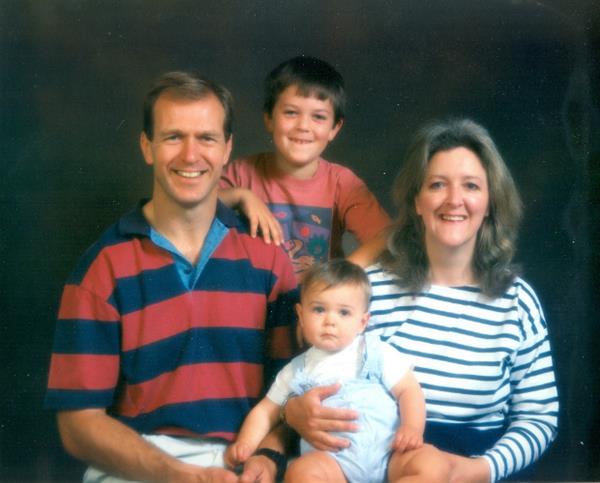