We are grateful to Fiona who worked with us in January 2016 to share her story here. Sadly, she passed away on 11th December 2017. We remember Fiona as we continue our work to raise awareness of this devastating disease and to fund research to help find a cure. She will be forever in our hearts.

Fitness fanatic Fiona discovered she had a brain tumour after collapsing at the gym. In the last six years she has undergone surgery and treatment as her tumour, classified as “low-grade” has continued to grow and cause paralysis. With the support of her husband, mother and friends, Fiona remains optimistic and will be supporting Wear A Hat Day 2016.

“I have known from the beginning that my tumour can’t be cured but I remain relatively optimistic. New treatments are coming out and I hope that there might be trials which I could be put forward for. My husband Andy is a very positive person. He has been a tower of strength and has kept me going. I see my mum every day and have great support from my friends.”

Andy and I got married in 2009 and the following year I felt I was losing power down my left hand side. I didn’t think a great deal about it other than perhaps it was a trapped nerve and I saw a chiropractor who said my spine was out of line.

It’s fair to say I was a fitness fanatic, I played squash and went to the gym a lot. I was keen to maintain my weight loss having started dieting when I was 21 and lost more than five stones. I was running on a treadmill at the gym when I collapsed. An ambulance was called and I was taken to hospital but was soon sent home.

The following year I still wasn’t right and I went to see my GP. Eventually I had a scan but assumed all would be well. I was 39, fit and healthy, had never smoked and gave up drinking years ago. The reality was that I had a hidden time bomb in my head. I was diagnosed with an anaplastic oligodendroglioma. Its location meant surgery was not possible but radiotherapy was an option.

Looking back, it is now a total blur. I was just so utterly shocked to be given that news. I started 30 sessions of radiotherapy, travelling to Edinburgh and back five days a week. I had lost my driving licence so relied on Andy and my mum to support me.

After six weeks of treatment there was some good news. The scan showed that the tumour hadn’t grown and, for the first time in nine months, I was able to work, at first through a phased return and then full-time. Things were OK for quite a while but in 2014 I felt a numbness down my left hand side. I went back to my consultant and a scan showed what I had dreaded – the tumour had grown. The options were to do nothing and to watch and wait or to go for chemotherapy. I didn’t really feel there was much choice, I wasn’t going to just leave things as they were and chose to start treatment straight away. After 12 months of taking the drug Temozolomide, the tumour had shrunk to more or less nothing. I was great news and, of course, I was thrilled.

However, by June 2015 I had numbness down my left hand side again and, this time, there was not much doubt in my mind what was causing it. I contacted the hospital immediately and was taken in for a scan very quickly. The news was not something I ever wanted to hear: the tumour was growing again.

My next option was surgery and last September I had a craniotomy procedure. Although it wasn’t possible to remove the tumour completely, it was de-bulked and they took away as much as they could. As there was a danger I could be left paralysed or worse, I was anaesthetised but awake during surgery and asked to move my foot so the surgeon could gauge how much tissue he could take away without causing unnecessary damage. I was unable to walk for a couple of days after the operation but had some physiotherapy which helped. Over the next few weeks I continued my recovery at home and was able to use a static bike which Andy had set up for me.

Unfortunately it wasn’t long before I was having numbness again. It was thought it might be a side effect of the surgery as my nerve ends were remapping but it got so bad that I was paralysed on my left hand side and couldn’t go out. My scan was brought forward to November 2015 and showed that the tumour was aggravating the nerves. I was adamant that I would keep fighting for treatment and I was put back on chemotherapy, this time with the drug PCV. The drug is very toxic and given in a maximum of six doses. I had my first just before Christmas.

I have known from the beginning that my tumour can’t be cured but I remain relatively optimistic. New treatments are coming out and I hope that there might be trials which I could be put forward for. Andy is a very positive person. He has been a tower of strength and has kept me going. I see my mum every day and have great support from my friends.

When my former work colleague Moira McPartlin told me I was the inspiration for her Big Knit Challenge to raise money for Wear A Hat Day I was very touched. It is 14 years since we worked together and yet she is doing this for me and lots of other people from the company have joined in to help. It is an overwhelming response and means so much to me particularly as I go through treatment. I want everyone to know that I’m 45 and I’m not finished yet! 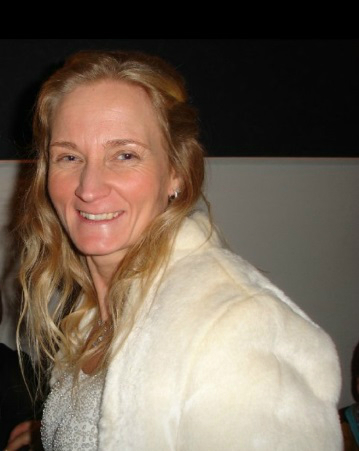