First-time parents Kelly and Marc Evans were overjoyed at the safe arrive of their beautiful baby daughter Evie on 9th March 2007. Their first sense that anything was wrong came when she was 18 months old. Eleven months later, after being examined in connection for repeated vomiting, a CT scan revealed a mass in Evie’s brain. She was diagnosed with an extremely rare Atypical Teratoid Rhabdoid Tumour (AT/RT), most prevalent in the under-three’s. She endured surgery and treatment but passed away, with her parents at her side, on 4th November 2009. She was just two-and-a-half.

We were overjoyed at the arrival of Evie, our first child. She was beautiful, happy and healthy. When she started vomiting at 18 months, I wasn’t terribly worried. We had a number of visits to the doctor and saw a paediatrician who tried to find if there was a trigger. We kept a food diary and wondered whether she had an allergy or intolerance but nothing was found. The idea that she had a brain tumour never even entered my mind and in May 2009, Evie accompanied me and her dad Marc on our honeymoon to Majorca. We had a great time and although the vomiting (which usually occurred in the mornings) continued, Evie seemed well.

By August she had become increasingly poorly and we took her to our local A&E department and then to hospital. The doctors said they couldn’t find anything wrong with her but a blood test was ordered for the following Monday. While we were waiting for the test, Evie went down with chicken pox. She was very lethargic and pale and was clearly not well.

We became increasingly concerned although, at times, she seemed happy enough playing with her toys and, of course, we didn’t want to believe that anything was seriously wrong. It was my mum who said Evie looked terrible and that we should take her back into hospital.

During that time I suddenly became very worried. I took her back to the doctors and was so concerned that I lied and said she had been refusing fluids. I was becoming desperate, thinking we were going to be fobbed off and made up my mind that this was the only way we could get the attention we needed.

The doctors asked Evie where she hurt. Sometimes she pointed to her head, sometimes to her leg but there was no consistency to what she was saying. A CT scan was ordered and she was sedated so this could take place.

It was then we were told there was a “small mass” in her head. Later we were to discover it was a very rare Atypical Teratoid Rhabdoid Tumour (AT/RT) covering a quarter of her brain and in its advanced stages.

Evie was sedated and put on intravenous steroids to reduce the swelling in her head and I travelled with her in an intensive care ambulance to a specialist unit at Sheffield Children’s Hospital. Marc followed by car, accompanied by his sister. By this stage, Evie’s condition was so unstable I was not allowed to be with her and had to sit in the front of the vehicle.

It was deeply shocking to suddenly find ourselves in the dark of night in the disturbing environment of a high dependency unit. There were more tests and tubes and Evie was prepped for surgery. Evie had always been a very relaxed child. She was conscious and playing with her toys. She was the centre of attention which she loved. I held her in my arms as she drifted off to sleep under the anaesthetic and said: “Mummy will see you soon.”

Now we could only wait for the 12 hours it took a team of surgeons to attempt to remove as much of the tumour as possible. We were updated every two hours. When she finally came out of surgery we were told it had gone better than expected – the surgeons had managed to do a complete resection, taking away 95% of the tumour. I was scared but also relieved. Evie was still sedated with a big bandage around her head. Marc and I stayed with her round the clock. During the night her nose began to bleed as she slept but we were told that was to be expected.

The next day she was gently woken up and within 24 hours she was sitting up in bed and eating grapes. She seemed perfectly fine. Her skull had been opened across the top of her head from ear to ear but it all looked very neat.

It would still be some weeks before we would know if the tumour was cancerous. But things seemed to have gone well and Evie was transferred to a normal ward. It wasn’t until much later that we discovered brain tumours kill more children and adults under the age of 40 than any other cancer ... yet just 1% of the national spend on cancer research is allocated to this devastating disease.

Soon after her surgery, Evie began to lose cerebrospinal fluid through her nose. This was because the bone in her nose had been damaged during the surgery. Because of this, she was prone to infection and, in the following weeks, she contracted meningitis a number of times and she was either in intensive care or taken back to the other ward, depending on how she was. We remained at the hospital throughout.

Then came the news that this tumour type was likely to prove fatal within just one year of it starting to grow. I thought back and realised that, by then, Evie had probably had it for 11 months. I think I knew straight away we were going to lose her.

We were shown around the oncology ward and plans for Evie to have chemo and radiotherapies were drawn up. We brought her home for a weekend and had a great time by the sea at Bridlington. We enjoyed the fresh air as she sat in her pushchair and ate some lunch. We had some family portraits taken. I was very scared now, so much so that I almost didn’t want to have her home in case anything went wrong, but I am glad we had that time.

When we arrived back at the hospital, Evie was not well enough to start her chemo and had to undergo further procedures on her nose. When she came back from the last of these we realised something was wrong. She wasn’t waking up as she had previously and she was taken back to the high dependency unit.

By then, our little girl was lethargic and started to have seizures. It was just eight weeks since the original surgery but the tumour had grown back significantly. It was the middle of the night and I knew, I just knew, we were losing her. I think it must have been mother’s instinct. As hard as it was, it was time to let her go. Nothing could be done to help her and it was so hard knowing what she had to bear.

Despite how poorly she was, Evie held on for weeks. We were moved to a side room and had palliative care. We stayed at her bedside until she passed away on 4th November. I felt strongly that I wanted to stay with her for as long as possible and Evie was taken to Bluebell Wood Children’s Hospice in Sheffield where she rested, with me at her side, until her funeral service was held nine days later. She was two-and-a-half.

In October 2011, our son Ashton was born. Evie was a little angel while Ashton is a very busy and mischievous boy! We were told it was down to a one in several millions chance that Evie had the tumour. We know there is a chance there could be a hereditary factor with this tumour type and, when I was pregnant with Ashton, we were offered genetic testing. We declined the tests but obviously knowing that was a terrible strain. Most AT/RT tumours present themselves by the age of three and Ashton is over that milestone now. He is happy and well.

As far as possible we block out what happened to Evie in order to get by. As she lay there so poorly in her hospital bed, I remember thinking how unfair it was that I would never see her in her school uniform.  Ashton had his first day at school in January this year – it was a very emotional day. 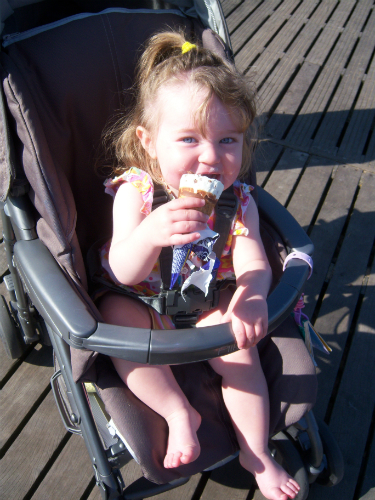