My stylish, creative, determined, positive, intelligent, adored, younger sister was diagnosed with a benign brain tumour in April 2012 when she was aged 19.  She underwent a wide-awake craniotomy in November 2012. In July 2015 the tumour became malignant and aggressive and was diagnosed as a glioblastoma multiforme grade 4. Emma underwent chemo and radiotherapy, but nothing could save her.  She was admitted to hospital in March 2016, just days after doing a sky dive for Brain Tumour Research.  Several weeks later, there came a point when every time Emma moved she had a seizure.  On 13th May 2016 she slipped peacefully away, aged just 23.

“Emma truly was an inspiration to us all.  When she discovered she was ill, she adopted an attitude of: ‘I’ve got a tumour, but I’m still going to get on with life.’ This positive attitude was to stand her in good stead right up to the end. She was never afraid to ask tough questions and each time she received bad news she would quickly pick herself up and move on. One time she simply said: ‘Ok, pass me the grapes, let’s get on with it’.”

Here is Emma’s story as told by her sister, Kirstin…

From the word go, Emma was apparently more of a handful than I had been. She had an insatiable appetite as a baby, and, as she quickly developed, it became very clear that if she could make a mess, she would. She was allocated the smallest bedroom in the house, just so her untidiness could be contained. This particular trait was to live with her all her life, even into the hospital room she occupied in her final weeks. As her elder sister, I bore it well, and was often called in to help restore some order.

Emma attended Copley Junior and Infant School, where she showed herself to be a diligent and quick learner. From there, Emma went onto the Calder High School in Mytholmroyd, where she gained 10 GCSEs and 3 A Levels.

Emma didn’t want to go to University; she wanted to pursue her interest in floristry and went to work for the Yorkshire Heritage Bus Company, dressing their vehicles with flowers for the hundreds of weddings they undertook each year. She was regularly commended for the beauty and style of her flower arrangements during her time there from 2008 to the end of 2013.

It was at this time that Emma’s relationship with her high school friend Isaac Knight blossomed and they were constant companions for four years. Isaac was a terrific support to Emma. He kept her grounded, but couldn’t keep her tidy! We all failed at that.

By now Emma had developed a real passion for good clothes, music and vintage 1920’s fashion, as well as travelling.

At the beginning of 2014, Emma decided she wanted a change of career, and also wanted to rebuild her confidence. To that end, she decided to move to Edinburgh to live with family for six weeks to prepare herself for the future. The visit was a huge success and she returned to Halifax full of confidence and raring to go.

She applied to Calderdale Council as an apprentice and was immediately accepted. This move was the making of Emma. Every position in the council she applied for, she got.  After each interview she was told they’d get back to her the next week, but they always offered her the job the same day.  Emma absolutely loved working for the Council and really wanted to progress – if fate hadn’t played its part, I’m sure she would have done.

Emma was just 19 when she started experiencing a tingling sensation in her right arm.  Then one day when she was driving down to London with her boyfriend Isaac from her home in Halifax, she lost the ability to speak for a few hours.  The GP put her symptoms down to stress, but Emma insisted on having a scan. Dad had private healthcare through his employment with Yorkshire Water so he was able to arrange an MRI very quickly.  You can only imagine how shocked we all were when it revealed Emma had a brain tumour the size of a chocolate orange, which inevitably was nicknamed Terry.

Emma was told that the tumour wasn’t likely to be cancerous, and in discussion with her neurosurgeon, it was agreed that an operation to remove as much as possible of the tumour could wait until after the summer of 2012, leaving her still able to go to a music festival and on holiday.

In November 2012, Emma had an awake craniotomy. She needed to be conscious for three hours during the twelve hour operation because Terry was so near the parts of her brain which controlled speech and hearing.  During surgery, Emma had to look at a series of pictures and describe what she was seeing. Afterwards, the neurosurgeon told her they had managed to get about 90 per cent of the tumour out and that she would recover.

Whilst still in hospital, Emma developed a bit of a complication which meant she had to go back into intensive care for two days.  It took a while for her to recover her speech and to be able to walk properly again, but Emma was determined. After five or six months she was back at work, despite being unable to drive, because, of course, she was forced to give up her licence.

We were all given to understand that she should have a long and happy life and be able to have children.

In 2015, Emma was doing really well at work and had been appointed into a new role at the Council. However, she started experiencing the odd symptoms again and by April and May she had become very tired, had headaches and problems with her vision.

Emma had an MRI scan in early July 2015, which showed that the remaining tumour had grown and had spread around her head and into her brain stem.  This time, however, the tumour was found to be a glioblastoma multiforme, grade 4 (GBM4).  She was told that, without treatment, her prognosis was just two months.  Her only option to increase her life expectancy to 10 or 12 months maximum was to undergo chemotherapy and radiotherapy treatment.

Emma, understandably, took a little time to come to terms with this news. However, she decided to go ahead with the treatment and faced it with a steely determination. She had a course of 30 days of radiotherapy and 42 days of chemo and seemed to respond well to the treatment – she was barely sick while she took the chemotherapy at home.  Isaac and her friend Ash played a major part in getting her up and taking her to Leeds for treatment during these six weeks. Dad was able to care for her full-time at home, making sure she was taking all her medications.

A mark of Emma’s attitude to her difficulties was that she always remained positive and continued to constantly be thinking about others. A really good example of this was her willingness to go and help in the clean-up operation after the devastating floods in the Upper Calder Valley at Christmas in 2015. She spent two days working on the streets, helping others even though she was not feeling very strong herself.

She hadn’t had an MRI scan since July 2015 – it was her choice not to, and her oncologist, the fabulous Dr Loughrey at St James Hospital in Leeds, went along with her wishes.

In March 2016, while still undergoing chemo, although she had finished radiotherapy, Emma challenged herself to do a sky dive to raise awareness and funds for Brain Tumour Research.  Just the month before, her oncology team had decided to extend her chemo as she was doing well on it.

On the day of the sky dive, Emma was very positive, although she was taking painkillers for an undiagnosed back problem. She was prescribed a dose of steroids to help her with any repercussions from jumping out of a plane three miles up in the sky.

Four or five days afterwards, Emma lost her appetite and a day or two later, she started being sick.  A week after the sky dive, she started experiencing really severe headaches and was grabbing her head in pain.  Emma’s dose of steroids was increased and she was admitted to the Teenage Cancer Trust ward at St James Hospital in Leeds.

Even with the increased dose, the steroids had no impact and doctors couldn’t initially diagnose what was causing the pain, thinking initially she might be having a bleed on the brain.  Emma was kept in for further tests.  It turned out that she wasn’t having a bleed – it was the start of the GBM4 going about its awful final business, even though an MRI scan had revealed that the tumour had shrunk.  Also, it seemed that there was something going on in her brain stem which controlled Emma’s breathing.  Mum and I stayed with her overnight and noticed that she was having seizures.

Emma wasn’t able to keep anything down, so she was no longer able to be given medication orally.  She remained in hospital for seven weeks.  One particular morning, she had a scarily big seizure and we were told she might not last another day. Witnessing this big seizure was very frightening.

Emma became very scared of her condition and what the tumour was doing. Thankfully, the medication, which she was then prescribed, meant that all of a sudden she started living in the moment and her fears largely went away.

Emma was such a fighter. She seemed really content in hospital and she had total trust in the nurses. They did everything they could for her, but at times struggled to control the pain. For us, watching on and supporting Emma, it was very difficult and felt like being on a roller coaster.

Her friends kept coming to see her, but there came a point when Emma couldn’t move without having a seizure.

Watching her die was horrible, even if the medication kept her as comfortable as possible.

During her final night, her breathing became very fast and very irregular. We were told to listen for a rattling noise.  At the point when Emma’s face turned very grey, the nurses advised us to call the family and get everyone to come in.  She slipped peacefully away – we didn’t know if she was in a coma or asleep.  It was all relatively quick and quite surreal in the end.

Emma truly was an inspiration to us all.  When she discovered she was ill, she adopted an attitude of: “I’ve got a tumour, but I’m still going to get on with life”. This positive attitude was to stand her in good stead right up to the end. She was never afraid to ask tough questions and each time she received bad news she would quickly pick herself up and move on. One time she simply said “Ok, pass me the grapes, let’s get on with it.”

Emma wanted us to ensure we continued her legacy to inspire others and raise awareness and funds for desperately needed research so that one day a cure can be found and families will no longer have to go through what we have. 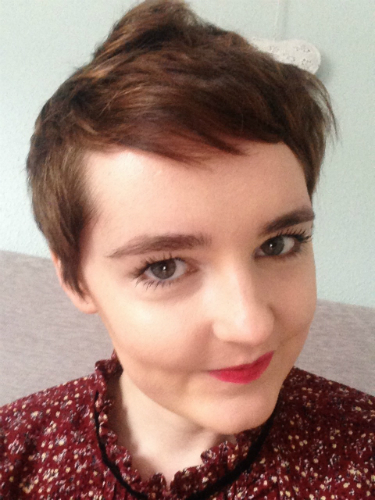