Ellie passed away aged 14 in 2002, just under a year after being diagnosed with a glioblastoma multiforme (GBM). Losing Ellie inspired her mum Wendy to set up a charity in her memory at a time when there were very few brain tumour charities. It was through losing Ellie that Wendy met Sue Farrington Smith, now chief executive of Brain Tumour Research, who was then a trustee of Ali’s Dream, having lost her niece to a brain tumour.

Here is Ellie’s story as told by her mother Wendy…

Ellie was a character; she was brave, funny and very lively. She had a twin sister, Cassie, but Ellie was always the first to do anything like getting her ears pierced or getting vaccinated.

Both Cassie and Ellie were very sporty. They played for many of the Elm Tree Middle School teams and as Ellie was left-handed and Cassie right, they were pretty formidable in both the hockey and football teams. Sadly, Ellie also tried out for the basketball team just six weeks after surgery, but didn’t get picked – probably because, against the advice of her consultant, she refused to wear a special helmet to protect her skull which hadn’t yet fused back together.

In the summer holidays, both Cassie and Ellie also used to attend the Rookie Lifeguard programme for children on the beach at Lowestoft which involved lessons in survival, rescue and sports skills.

Of all my children, Ellie was the most musical and she learnt to play the trumpet. She was invited to play for Suffolk County Band, but she preferred to play for herself. It was a lovely tribute to Ellie that her trumpet teacher played the piece she had recently been learning at her funeral.

The first warning that Ellie was anything but fit and healthy came when she had spent the day crabbing with her siblings and some friends.

“We were having tea when Ellie complained of a funny smell and then started to have a major epileptic fit. I recognised it as a seizure straight away because I worked with adults with disabilities for many years. But nothing prepared me for the shock of seeing my daughter have this seizure.”

We called an ambulance, but at the James Paget University Hospital were told that it was quite normal for children, or teenagers, whose brains were developing, to have seizures and were sent home the next morning.

Ellie had further seizures, although not grand mal, and the hospital was doing regular tests. In late October she had an EEG which showed normal epileptic activity. She then had an MRI scan not long before Christmas.

“It was a shock we had really not been expecting when we were told that Ellie had a brain tumour and would need an urgent operation.”

We were given a date in late January because of the imminent Christmas period but it seemed far too long to wait so, after discussion with the hospital, eventually, the date of New Year’s Eve 2002 was agreed.

Ellie’s surgery at Addenbrooke’s Hospital went as planned and for a couple of days we believed it to be a success and that everything was well.

“We dared to believe that we would soon be heading back towards normality. But that was before we heard the results of Ellie’s biopsy and the neurosurgeon told us Ellie had a glioblastoma multiforme (GBM) and her prognosis was just nine to 11 months.”

Devastatingly, we were told that the radiotherapy treatment she would undergo would be a containment and not a cure and that chemotherapy was not an option.

Although Ellie was quickly booked in for radiotherapy, weeks went by while her mask was being made. We were spending a few days at Center Parcs just after Ellie had had a scan. Ellie started vomiting and we went back to the hospital to learn that the tumour had grown in just a couple of days. She was given emergency radiotherapy without a mask, which zapped the whole of her head.

We were told that the tumour was causing so much pressure to build up that she could have quickly become unconscious and that if this had been her first presentation to hospital, she wouldn’t have been given any treatment at all.

Things improved from then for Ellie and she went back to school again. She had previously returned to school in January after recovering from surgery because she loved school and loved her friends.

During her six weeks of radiotherapy, I had to insist, because of her love of school, that Ellie had the first appointment of the day at 7.30am so that I could get her to school straight afterwards – a one-hour-and-15-minutes’ drive away, during which Ellie slept.

Elm Tree Middle School was fantastic during all this time and organised a particular teacher to be her main go-to person who made sure everything was set up to support Ellie. By this time, her handwriting and eye-sight had got quite bad, but Ellie just wanted to feel normal. They even organised her and Cassie’s transition to high school so the support could continue. 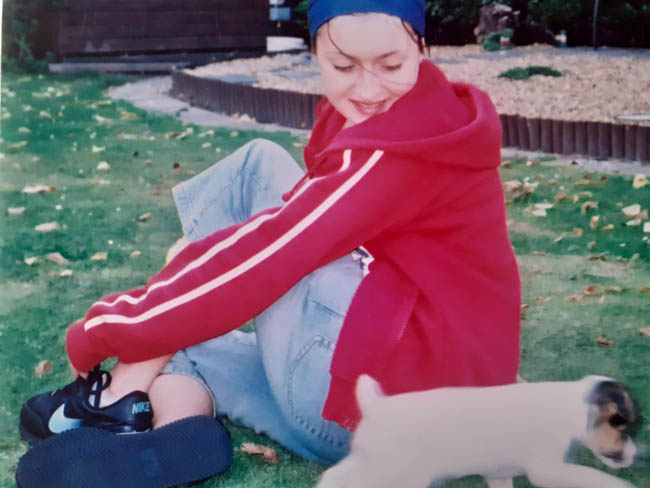 The consultant at the James Paget Hospital, who we were seeing once a week, tried to convince me that I should ensure everyone in the family, including the other kids, understood the situation that Ellie’s condition was terminal. I however disagreed and felt that Ellie wouldn’t have wanted to be pitied or treated differently to her siblings. I wanted to keep things as normal as possible for as long as possible. And we hadn’t even discussed with Ellie that there wasn’t a cure for her and that her time was limited.

During this time, Ellie got a paper round, as did Cassie. I went along with her to carry her bag and push her in a wheelchair, as it was what she wanted to do.

We also had a lovely time away in Devon seeing family.

As Ellie’s health continued to deteriorate, we still kept the truth about her prognosis from her, although she did know she had cancer in her brain. She told us: “I am NOT going to have chemotherapy”, having seen what other kids in hospital were having to endure. It was a relief to us because obviously we already knew that chemotherapy wasn’t an option to her.

Throughout her illness, Ellie kept a diary, which, since losing her, has been lovely to have to read because most of it is so positive. As a family we continued doing normal stuff and showing positivity and Ellie’s words reflect that.

“Ellie wrote about what to wear for the school disco, about parties and going to the beach and which boys she fancied. The only two sad entries were not being picked for the basketball team and when her legs started to go, which includes a couple of swear words!”

Ellie passed away on 11 November 2003, which fittingly was Remembrance Day, in James Paget Hospital. We didn’t want her to die at home because she shared a room with her sister and we didn’t want that room to be tainted with such sad memories.

We were very lucky that the hospital agreed to provide her with a room – they hadn’t dealt with any palliative care for kids in Ellie’s situation before – as the nearest hospice was too far away for friends to visit. We took her quilt from home and put up some of her posters on the walls.

Ellie was cared for in the hospital by brilliant and caring staff for five weeks until she passed away, with friends and family coming in and out until she was too ill to have visitors.

“As the weeks went on, she became more confused and childlike and the gaps between sleeping and being awake became shorter. It was so horrible. It’s not something you experience with cancer in other parts of the body.”

We said we didn’t want flowers at Ellie’s funeral because she had always said she didn’t see the point of picking flowers from the garden, only for them to die in vases in the house. The funeral donations raised a lot and I remember Cassie asking: “Why don’t we try to raise even more?” which gave us the idea to start a charity.

After Ellie died, I can’t remember now how I was, but I know I tried to focus on something positive. I went online and that was how I met Sue Farrington Smith who had lost her niece Ali to a brain tumour and recently set up Ali’s Dream with her sister. There were very few brain tumour charities in the UK in those days and it seemed that there was no support for families affected and virtually nothing going into research. We met up, along with Tina Mitchell who had set up what was known as Hammer Out then, and started campaigning and going to Parliament. 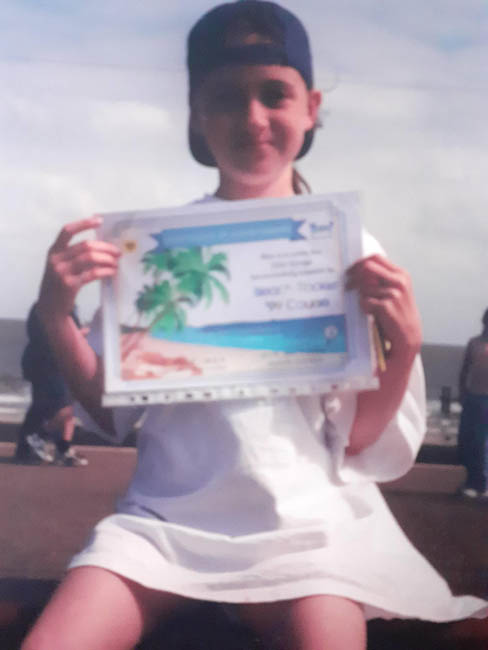 We set up the Ellie Savage Memorial Trust in February 2003 to help families across East Anglia struggling while caring for a child affected by a brain tumour or cancer. Its remit was to help make their lives a bit easier in a practical way, like for example, funding specialised equipment for a child who could no longer read properly, helping out financially with the cost of childcare, having to keep the heating on more, or travel to hospital appointments. I remember how a friend I made through taking Ellie to her hospital appointments had to buy a whole new wardrobe for her child because steroids had swelled her body so much.

Over the years, Ellie’s Trust raised around £300,000 which, as well as providing financial support for families, funded a research project into new ways of treating GBM and helped to pilot a rehab programme in partnership with Addenbrooke’s Hospital.

We enjoyed massive support from local companies as well as the community who really got behind us.

Ellie’s Trust continued as a charity for 17 years, helping dozens of families across East Anglia before the original trustees moved on and it sadly closed down in 2020.

My marriage failed just as over 70% of marriages do when parents lose a child. Her diagnosis and subsequent death affected us in very different ways. Thankfully we both moved on and are very amicable.

“Three of my four children are now grown up, married or have a family of their own, but I still consider that I have four children. We haven’t forgotten about Ellie, despite the fact that we are moving forward with our lives.” 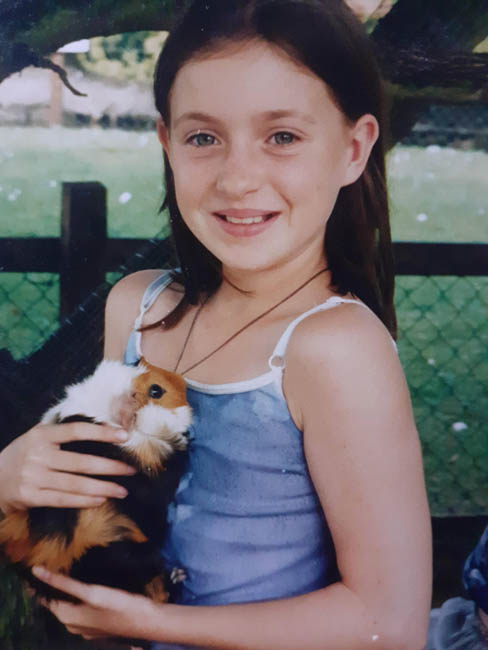