A mum of three daughters and a busy PA for Croydon Council, Elizabeth’s symptoms were initially thought to be nothing more than sinusitis, but sadly turned out to be an aggressive and incurable brain tumour.

Despite two surgeries, chemotherapy, radiotherapy and a drug trial, Elizabeth lost her fight with the tumour two years later, her immune system unable to fight off a chest infection and sickness bug caught during her final round of chemo.

“The tumour changed her into a completely different person. The fierce, feisty woman that had brought me up was slowly turning into a passive pussy cat.”

Mum had a busy life juggling her full-time job as a PA for Sutton Council, looking after three grown-up daughters and Dad.  In any spare time she did have, she loved to shop, she loved a good book but most of all she loved her holidays, and jetted off to the Caribbean at least once a year.

In early 2013, she started to suffer with some odd symptoms.  She complained of feeling dizzy and nasty headaches. A couple of times, Mum fell off her chair at work and she became quite forgetful.

At Charing Cross Hospital A&E, they gave her a CT scan and said they had found a “lump” in her brain.  The lump was biopsied, and confirmed as a grade 4 Glioblastoma Multiforme (GBM) tumour.  This was such shocking and unexpected news, we struggled to take it in.

A few days later, Charing Cross surgeons attempted to remove the tumour, but they couldn’t remove all of it.  Some of the tumour was affecting the areas of her brain that control motor skills and speech, so they were only able to take away about 80%.  The remainder would be treated with chemotherapy and radiotherapy.

Despite medical advice, Mum didn’t want to stay in hospital after surgery and discharged herself home after only one night.  I was still living at home while commuting to my BSc psychology, counselling and therapy course at the Luton campus of the University of Bedfordshire, so I was able to help Dad look after her.

Mum was given chemotherapy tablets and radiotherapy simultaneously at Charing Cross Hospital.  By this time, she was no longer able to drive, and the regimen meant going every day for six weeks, so for the first round my sister took her each day, and for the second-round I took her.  But that was the least of the side effects, which were brutal.  The chemotherapy gave her nausea and hair loss, but the radiotherapy was worse, causing issues with her motor skills, she was constantly falling over and getting her words all muddled up.

In June 2013, Mum and I decided that we would lose our hair together.  She didn’t want to wake up with hair on her pillow, nor have it coming out in clumps, so we both shaved our heads, and raised some money for charity in the process.  It made her feel less self-conscious knowing that she wasn’t the only one without hair, and my photo ended up in the local paper, too!

During Mum’s treatment, I relied heavily on my friends and lecturers at university to help me out with any sessions or assignments I missed.  I had a part-time job in a pub and helped look after Mum in between.  Dad was still working full-time for Sutton Council in the waste management team, so between us, our time juggling skills became second to none.

At the time, my eldest sister, Kelly, was living in Brighton with her husband and my other sister, Stacey, was at university in Swansea.  It was really difficult for them being away from Mum, as we are such a tight family.  The distances from Feltham meant that regular travel to see Mum for either of them was very difficult, especially for Kelly while she was first pregnant and then a Mum herself.  But they still came and visited loads, and spoke to her frequently by phone to keep her spirits up.

During the first round of chemotherapy and radiotherapy, Charing Cross kept tabs on Mum’s tumour with weekly scans.  These lasted 45 minutes each, and she hated going.  Between the family, we made sure that someone was always there, and we would stand at the bottom of the MRI scanner and pull funny faces.  She did tell us off because she was supposed to remain still, and would blink to let us know she could see us, and it was her signal to us to stop messing about.

After the chemotherapy, the scans showed that the tumour had unfortunately grown, so Charing Cross decided she needed a second surgery to remove more of the tumour.  This second surgery was followed by yet more simultaneous chemotherapy tablets and radiotherapy.  She suffered with much the same side effects as the first round, and soon became reliant on a wheelchair because she couldn’t stand up properly.  It was heartbreaking to watch her deteriorate like that.

Even though she was desperately ill, Mum hated being cooped up at home.  She made us take her out as often as possible, even if it was only as far as the local supermarket.  She loved going to Brighton to see Kelly and her new granddaughter Elsie, the sea air and cooing over the baby did her the world of good.  Even in her wheelchair, she still wanted to go out for coffee, just for a change of scenery.

The tumour changed her into a completely different person.  The fierce, feisty woman that had brought me up was slowly turning into a passive pussy cat.  But she never gave up fighting.  She constantly told us “come on girls, there’s hope”, and all three of us would muster up some positivity.

Mum was then put onto a drug trial for three months, but it was hard to know if they had any effect because of everything she had already gone through.  She kept telling us that she thought it was working, but secretly she and Dad knew it wasn’t.

After three months on the drug trial, she was put back onto chemotherapy tablets again.  Unfortunately, by now, her immune system had been battered into submission and she developed a chest infection and sickness/diarrhoea bug.  Dad and I were really worried that she’d lost a lot of fluid through vomiting, so she went into hospital where they replenished the fluids and made her comfortable.

But there was to be no happy ending.  Mum just couldn’t shake either the bug or the chest infection and died in hospital two days later.  One of the last things she said to me before she died was that I had to give up smoking and get healthy.  She was the only person I ever listened to, and always did as I was told for, so I promised her I would, and I have done.

Dad went to pieces when she died.  He spent six months with no motivation, and literally sat in the house, grieving.  Slowly he has managed to rebuild his life, as we all have, and has done some decorating and loves tinkering with his sports car.  And, somehow, he manages to keep track of us all!

I know Mum would be so proud of her girls now, Kelly is a fantastic mum to her two children Elsie and Teddy, Stacey is doing her dream job as a Museum Exhibitions Assistant and excelling at it, and I’m now at Nottingham Trent University studying for my MSc in psychology clinical practice.  Competition to get on the MSc course is really high, and it’s a great opportunity for me to go on to be a Clinical Psychologist.

We miss Mum every day.  When she became ill, none of us knew that brain tumours kill more children and adults under the age of 40 than any other cancer, and when I look at the statistics I actually feel angry.  After giving up smoking, I decided that the other half of my bargain with Mum to get fit needed to be done, so I started running.  I’ve so far done a couple of 5k’s and I’ve signed up to run the London Marathon for Brain Tumour Research.

I know it’s a big step (or run) from 3 miles to 26, but I am determined to do it in memory of Mum and to help other families who are going through what we had to.  A strength and conditioning coach at the University has put together a training plan for me, and so far, it’s going well and I’m on schedule.  I do a bit of cycling and weight training too, but running is my priority right now because I want to raise £2,740 to sponsor a day of research and have a tile in Mum’s memory on the Wall of Hope at Charing Cross.

Mum was only 54 when she died, it’s still desperately unfair that 1% of the national spend on cancer research has been allocated to this disease because it is so devastating, and its impact on our family has been awful.  She was far too young to be taken from us, and I hope that my fundraising goes some way to finding a cure. 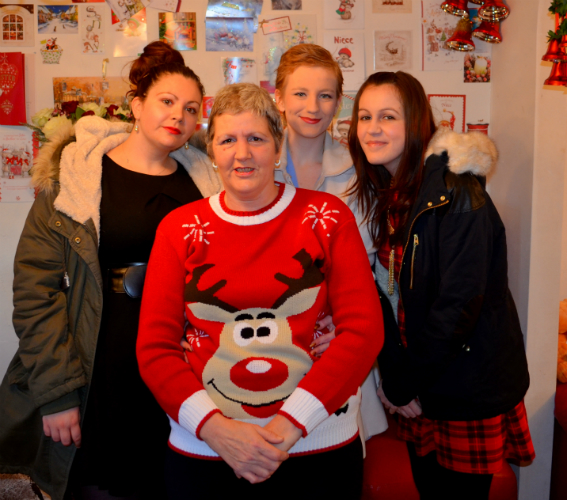