Elaine Neesam-Smith’s story reminds us just how devastating a brain tumour can be and how desperately a cure must be found. In October 2017, the 52-year old collapsed and was placed in an induced coma. Little did she know, a highly aggressive glioblastoma multiforme (GBM) was the cause. The tumour was inoperable and there were no treatment options. Sadly, the much-loved mum, grandma, wife and friend, died just six months later.

“Now it’s six months on and we’re taking each day as it comes. Kieran, Paul and I are plodding along and supporting each other through our grief. Memories of Mum are everywhere and sometimes it’s a comfort and sometimes it’s too much to bear. Ellie and Heidi miss their grandma so much and they call her their ‘star in the sky’. Mum was such a doting grandma and it breaks my heart that she won’t see them grow up.”

Here is Elaine’s story, as told by her daughter Danielle…

Seeing my mum on the dancefloor at my wedding was so heart-warming; I couldn’t believe she’d been in a coma just two weeks before, yet there she was, dancing and up to her usual tricks. She was always the life and soul of any party, and she was the glue that held our family together. I’m proud to have inherited her bubbly character and my five-year-old daughter Ellie is becoming just like her too.

It all started a month or so before the wedding. Mum had been at the tills in the supermarket one morning when she suddenly started having a fit and collapsed. She’d been on her own and my brother Kieran and I didn’t find out until a few hours later. Kieran was at home and answered the phone with his usual reply: ‘Elaine’s not in, can I take a message?’ The voice on the other end said, ‘she’s here at the James Cook University Hospital, please let her close family know and come here as soon as possible’.

I rushed over as fast as I could, leaving Ellie and her little sister, Heidi, at home with their dad Scott. Kieran and our stepdad Paul met me there and together we went through to A&E to find out what on earth was happening. They started leading us through to see Mum and when I saw the sign for resus, I broke down and fell to the floor. I just assumed the worst and couldn’t be consoled. It felt like something out of a film – the nurses spent ages trying to calm me down and took us into a side room where they told us Mum was in an induced coma because she wouldn’t stop fitting. I’ll never forget that moment.

We rang family and friends to let them know the news. My dad was there in a flash – even though my mum and him had split 25 years ago, he still dropped everything to be with us. It’s situations like that which make you realise who really cares.

The consultant believed Mum had had a stroke and that the abnormalities on her brain scan were stroke damage. I remember seeing the scans and there was something the size of a 5p coin on Mum’s brain. After three days, Mum came out the coma and was moved to the stroke ward. She was as shocked and mortified as the rest of us when she found out what had happened to her. Within a week, however, Mum was almost back to normal; she was sluggish and her words were slurring a bit but she was able to move around and take herself to the bathroom.

We’d been planning my wedding to Scott for the 17th November but with everything that was happening, I thought we should postpone it. Mum had helped us plan it – being the queen of organisation that she was – and she was adamant that it should go ahead as scheduled. I think it gave her motivation to get better and distracted her from the trauma of being in hospital. The big day came around two weeks later and it was just perfect. Mum was tired and had to go off to lay down every now and then but other than that and a bit of weight loss, she was her normal self. All the family were so surprised and pleased to see she was doing OK.

Fast forward to the 11th December and Mum had another episode. This time she was at home and Paul and Kieran found her collapsed in the bathroom. It’d been late at night, and I lived separately from them, so frustratingly I didn’t find out until the next morning. This time, the consultants were able to see clearly what was going on. Her MRI results showed a glioblastoma multiforme (GBM) at the front left of her brain. If that wasn’t worrying enough, within a few days, a new scan showed it had spread to the back right. Mum was put on steroids and told there were no other treatment options.

I was by her side at the hospital whenever I could be there and my girls would come along too. They’d fan her when she got too hot and try and pinch her Maltesers when she wasn’t looking. Ellie was five and Heidi was three so they didn’t understand what was happening to Grandma, they just knew she needed looking after. Mum loved giraffes so they bought her a giraffe hand warmer which she held on to until the very end.

Since Mum died, I see more and more how similar to her Ellie is. She’ll say things that sound just like her Grandma and it’s a bittersweet feeling; sometimes it really upsets me and I don’t know how to explain why to her. She’s a brainbox just like her grandma too; the brains clearly skipped a generation in our family!

After a few weeks in the hospital, Mum gradually got better as the steroids relieved the pressure in her brain. However, the neurology team decided that she wouldn’t be able to leave hospital. We tried to have her moved to Redcar Primary Care Hospital but red tape made the whole thing difficult. Instead we moved her to Yew Tree Care Centre in Redcar. At this point, she was losing movement and slowly stopped talking so we had to learn to read her facial expressions to communicate with her. She had an expressive face which made it quite easy. I remember one day when I had to ask her if she wanted a burial, she scowled at me as if I’d made the most ridiculous suggestion… ‘Cremation it is then!’ I thought to myself.

She kept up her appetite for some time and still loved her Maltesers. It wasn’t right until the very end that she lost her appetite. It was early March and one morning, she’d happily eaten a full English breakfast but by the evening she couldn’t eat anymore. My aunty Gillian is a palliative nurse and when I told her this, she said that when patients get to this stage they only have a couple of days left. Of course, I started panicking when I heard this and had to let everyone know. Scott works away during the week and I rang him and told him to drive back as soon as possible because there wasn’t long left.

It was horrible counting down the hours and I didn’t want to say goodbye to her. On the 8th March, just after my dad and Scott had arrived, Mum took her last breath. It was as if she was waiting for them to arrive so they could look after me. Kieran, Gillian, Paul and my grandparents were all in the room and I like to think she knew we were there with her. Before anyone else said a word, my grandma, who has dementia and isn’t very lucid said, ‘she’s not in pain anymore.’

Now it’s six months on and we’re taking each day as it comes. Kieran, Paul and I are plodding along and supporting each other through our grief. Memories of Mum are everywhere and sometimes it’s a comfort and sometimes it’s too much to bear. Ellie and Heidi miss their grandma so much and they call her their ‘star in the sky’. Mum was such a doting grandma and it breaks my heart that she won’t see them grow up, but I’ll make sure they never forget her. At Mum’s cremation, we put the giraffe in her coffin so the girls know that wherever she’s gone, she’s taken their special gift with them.

We want to keep Mum’s memory alive as much as possible and the girls and I are fundraising for the Brain Tumour Research charity in her name. On the 29th September we’ll be joining the Walk of Hope at the Rising Sun Country Park and our bright shining purple star will be smiling down on us every step of the way. I hope we can raise as much as possible and bring everyone a step closer to a brain tumour cure. It’s horrendous that so many people are dying from this disease and we want to help change this.

If you have been inspired by Elaine’s story and would like to make a donation, visit www.justgiving.com/fundraising/danielle-edwards17

You may also want to consider leaving a gift in your Will - visit our website here for more information www.braintumourresearch.org/legacy 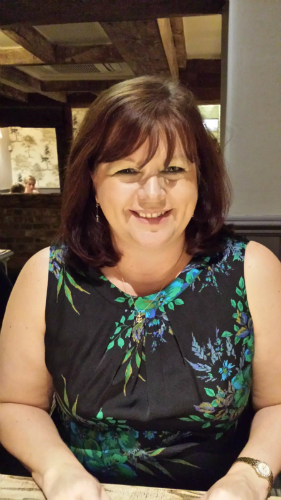